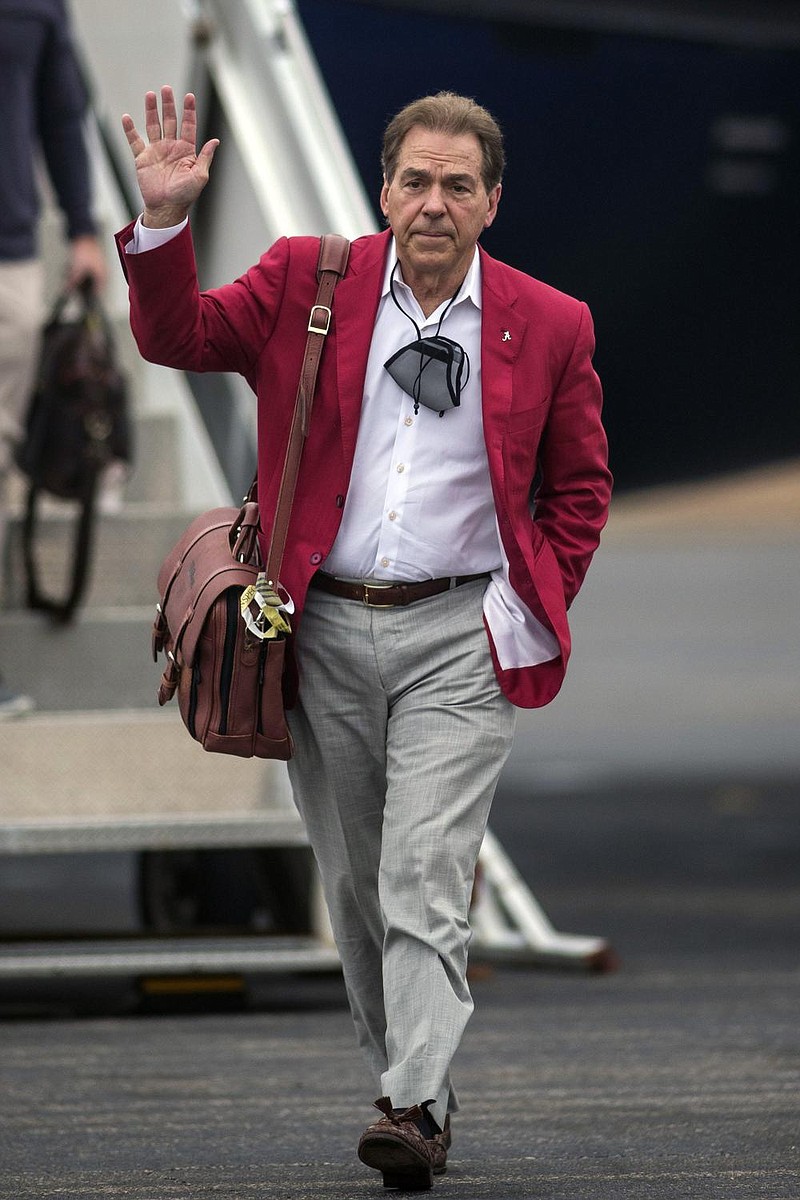 It was time to start chasing No. 8, after all.

Alabama capped off a 13-0 season with a 52-24 victory over Ohio State on Monday night in the national championship game at Hard Rock Stadium in Miami Gardens, Fla.

"The to-do list started after the game last night," the 69-year-old coach, who is showing no signs of slowing down, said at a Tuesday morning news conference.

A block party began right after the game as well, with Tide fans flooding the streets of Tuscaloosa near the campus despite officials warning against large gatherings during the pandemic that could lead to outbreaks.

In South Florida, the championship celebration for Saban didn't last very long. They never do.

The work started by meeting "right after the game" with players considering leaving early to enter the NFL Draft, along with seniors who are eligible to return because of the coronavirus pandemic.

Next up on his to-do list is polishing off another loaded recruiting class and replacing offensive coordinator Steve Sarkisian, who is taking over at Texas. Saban declined to give any timetable for making that hire.

None of this is new for Saban, known for his singular focus and ability to annually replace elite talent on both the roster and his coaching staff. Saban broke a tie with Alabama predecessor Paul "Bear" Bryant for the most national titles by a major college coach, including one he captured at LSU and six over the past dozen years in Tuscaloosa.

"It's an ongoing process, building a team," Saban said. "I don't think you can fall asleep at the switch for a minute if you want to try to do it the right way for your players and your program."

But Saban said this was one of his best teams, if not the best. Facing a regular-season schedule of all SEC opponents because of the pandemic, Alabama breezed into the league title game having scarcely been challenged.

Only Florida in the SEC Championship Game came closer than 15 points. Neither semifinal opponent Notre Dame (31-14) nor the Buckeyes mustered much of a challenge.

Quarterback Mac Jones, a Heisman Trophy finalist who is exploring entering the NFL Draft, left no doubt where he believes this team belongs historically.

"I think we're the best team to ever play," Jones said. "There's no team that will ever play an SEC schedule like that."

The 2009 Alabama team that went 14-0 is Saban's only other undefeated group.

And he left no doubt this one holds a special place for him because of how well Tide players negotiated the coronavirus dangers and issues.

This team earned a place in his heart, and perhaps history. But now Saban has begun laying the foundation for next year's team.

There's plenty to do, and considerable talent poised to depart.

Heisman Trophy winner DeVonta Smith departs as the SEC's most prolific receiver. Alabama's all-time leading rusher, Najee Harris, also is headed to the NFL. So presumably are All-American offensive linemen Alex Leatherwood and Landon Dickerson. Jones is undecided, but he is projected as a first-round draft pick by many draft analysts.

Junior cornerback Patrick Surtain II, the Jim Thorpe Award winner as the top defensive back, also is projected as a first-round pick. Barmore is among the underclassmen with a decision to make.

Saban said this probably wasn't his most talented team overall, though offensively it would be hard to top.

Alabama's latest recruiting haul will help ease some of the loss of talent. The Tide's class has seven five-star prospects and ranks as the nation's best, according to the 247Sports composite rankings.

And seniors like Smith and Harris, who returned this season hoping to claim a title and improve their draft stock, get to finish on top.

"I came back to get a degree and to win a national championship," Smith said. "That's why that meant so much to me, why I was just so happy about it. Two main boxes that I wanted to check off, I checked off."

Now Saban is checking off the usual items on his offseason to-do list.