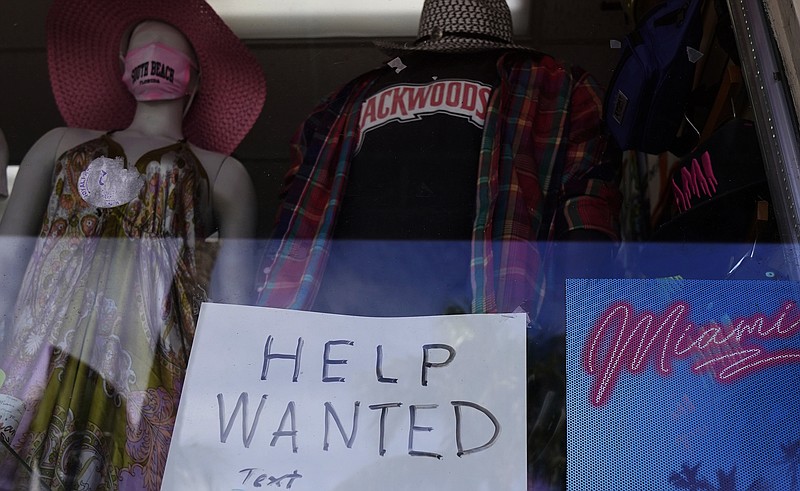 A "Help Wanted," sign is shown in the window of a souvenir shop, Thursday, Jan. 7, 2021, in Miami Beach, Fla. Layoffs spiked in November compared with the previous month and the number of job openings slipped, a sign the job market has stalled as the resurgent coronavirus has forced new shutdowns of restaurants and bars and discouraged consumer spending. (AP Photo/Wilfredo Lee)

WASHINGTON -- Layoffs spiked in November compared with the previous month and the number of job openings slipped, signaling that the job market has stalled as the resurgent coronavirus has brought about another wave of shutdowns of restaurants and bars and hobbled consumer spending.

While the layoffs were concentrated among restaurants, bars and hotels, the slowdown in job postings was widespread across most industries, showing a reluctance by businesses to hire more people in a pandemic-fueled recession.

The number of open jobs at the end of November slipped 1.6% to 6.5 million, the Labor Department said Tuesday, its first drop since August. The figure doesn't include openings involving workers recalled from layoffs or positions only offered internally.

Layoffs, however, soared 17.6% to 1.9 million, driven mostly by job cuts at restaurants, bars and hotels, which more than doubled.

The decrease in job openings included fewer vacancies in the education and health services, leisure and hospitality, and information industries, as well as state and local governments.

The number of hires, which includes rehired employees, improved slightly, rising by 67,000 to 5.98 million. The hires rate held at 4.2%.

The economy is likely to grow at a healthier pace later this year, economists forecast, as vaccines are more widely distributed and recent government stimulus provides more money for Americans to spend. The faster growth should increase hiring, but most employers for now appear to be in wait-and-see mode.

On Friday, the Labor Department said employers cut 140,000 jobs in December, the first time the nation has shed jobs since April when U.S. infections began to surge. The unemployment rate was stuck at a still-high 6.7%, the first time it hasn't declined since April. According to that report, jobs lost were also highly concentrated in fields like educational services and film production, as well as already suffering restaurants and hotels.

Tuesday's report, known as the Job Openings and Labor Turnover Survey, adds more details about hiring and firing by businesses and government agencies. The data on open jobs provides insights into whether companies expect business to improve enough in coming months to justify additional hiring.

While layoffs have been concentrated in mostly lower-paying jobs, Indeed's data shows that job postings have declined by a larger amount for the highest paying one-third of positions, and by the least for the lowest-paying third. That also suggests firms are still uncertain about the business outlook and reluctant to commit to hiring higher-paid employees.

Competition among job seekers eased for a seventh month, with 1.64 unemployed workers vying for every job opening in November. That contrasts with vacancies exceeding the number of unemployed by more than 1 million before the pandemic.

Three of four regions showed fewer job vacancies in November, led by an 87,000 drop in the South, the biggest decline since April. Openings also declined in the Northeast and West.

Information for this article was contributed by Christopher Rugaber of The Associated Press and by Jeff Kearns of Bloomberg News (TNS).