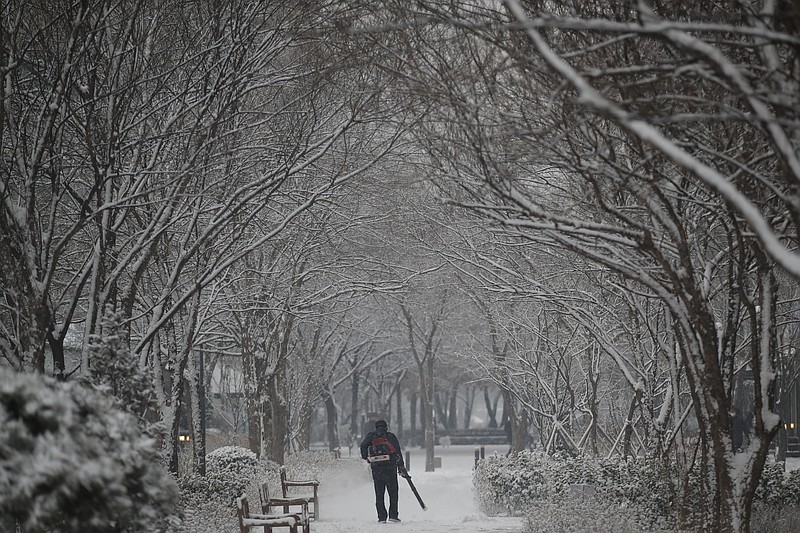 Beginning Saturday, India will start the undertaking of inoculating an estimated 30 million doctors, nurses and other front-line workers. The effort will then turn to inoculating around 270 million people who are either older than 50 or have secondary health conditions that raise their risks of dying from covid-19.

The first vaccine shipments contain the Covishield vaccine made by the Serum Institute and developed by Oxford University and AstraZeneca.

India's drug regulator has also approved for emergency use a homegrown vaccine, Bharat Biotech's Covaxin. Medical groups and others have raised concern about the drug being approved with scant evidence of its effectiveness. It's still unclear when and where Covaxin will be distributed.

India has the second-most coronavirus infections in the world, after the U.S. It has confirmed more than 10.4 million cases and over 150,000 deaths.

In other developments in the Asia-Pacific region, the small Pacific nation of Micronesia reported its first case of the coronavirus after a crew member on an arriving ship tested positive. In an address to the nation, President David Panuelo said many people had heard the "alarming news" but the case has been contained at the border.

Panuelo said one crew member aboard the government ship Chief Mailo had tested positive when the ship returned from the Philippines after more than a year of dry dock repairs. He said the crew member has been isolated on board, that all other crew members remain on board, and that law enforcement authorities are monitoring the ship daily. Micronesia, home to 100,000 people, had been among just a few nations to have avoided the virus altogether.

New Zealand will soon require that travelers from most countries show negative coronavirus tests before they leave for New Zealand. Covid-19 Response Minister Chris Hipkins said New Zealand is in a fortunate position to have stamped out community spread of the virus but takes nothing for granted. The new rules will require travelers to have a negative test within 72 hours of departure.

The rules will be imposed on travelers from the U.S. and the U.K. from Friday and most other countries soon after. Travelers from Australia and some Pacific nations will be exempted. In addition to the test requirement, New Zealand will continue to place new arrivals in mandatory two-week quarantine at the border.

Indonesia has received the raw materials to begin making 15 million doses of Sinovac's covid-19 vaccine. The materials will be stored at cold temperatures before being sent to state-owned PT Bio Farma in Bandung, West Java, which Health Minister Budi Gunadi Sadikit said will process them within a month.

Indonesia's Food and Drug Authority gave emergency approval to Sinovac's vaccine Monday. The first two batches of the vaccine, which were fully produced by the Chinese company, will be distributed beginning this week. "The government brought this third batch to add the number of the vaccine that will be distributed to the public," covid-19 task force chief Doni Monardo said. Indonesia has recorded 836,000 cases and 24,000 deaths from covid-19.

Meanwhile, the African Union has secured close to 300 million vaccine doses in the largest such agreement yet for Africa, a continental official said Tuesday.

The 300 million doses are being secured independently of the global Covax effort aimed at distributing vaccines to lower-income countries, Ndembi said.

"We have reached the final stage of our deals," he said, referring questions about who will be providing the vaccines and at what cost to the upcoming announcement.

While richer countries have been urged to donate any excess vaccine doses to countries in need, Ndembi said that "the Africa [disease prevention agency is] not going to table to beg for vaccines. We're going to the table to buy. ... All these doses I mentioned have been procured and [are] being paid for."

Information for this article was contributed by Cara Anna of The Associated Press. 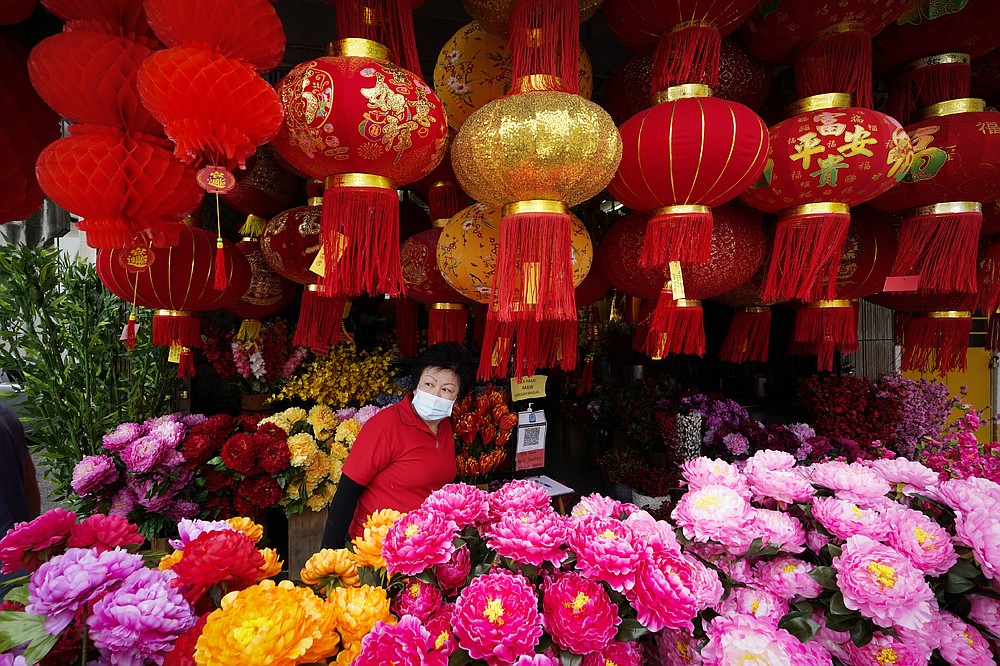 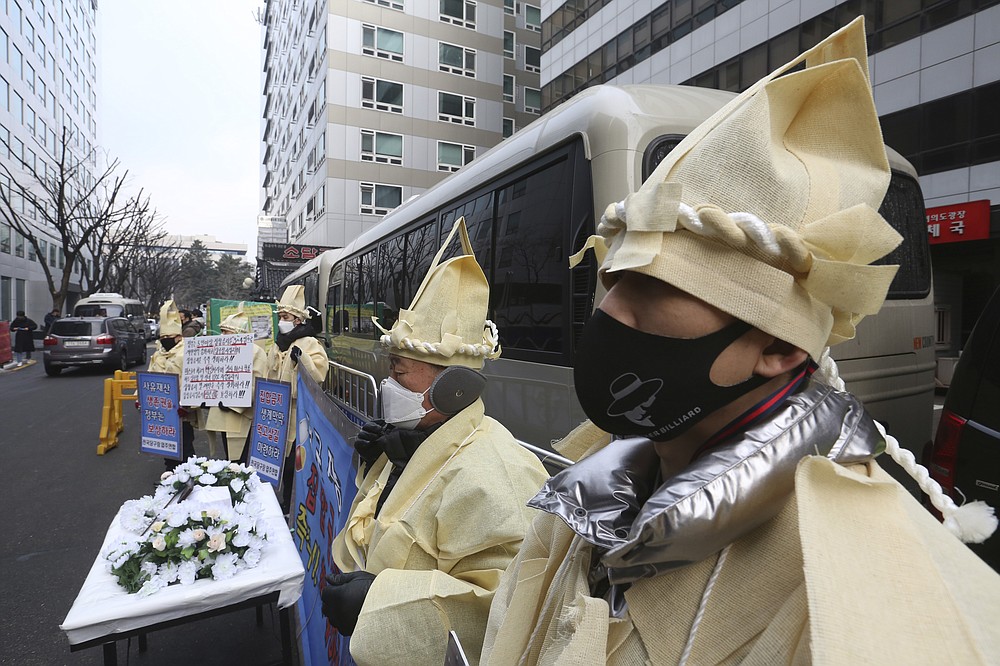 Members of an association of billiard room owners wearing traditional funeral clothes stage a rally demanding the government to allow the reopening of their businesses amid tightened social distancing rules against the pandemic in front of the ruling Democratic Party headquarters in Seoul, South Korea, Tuesday, Jan. 12, 2021. South Korean President Moon Jae-in on Monday said the government will offer COVID-19 vaccinations to everyone free of charge in phased steps. (AP Photo/Ahn Young-joon) 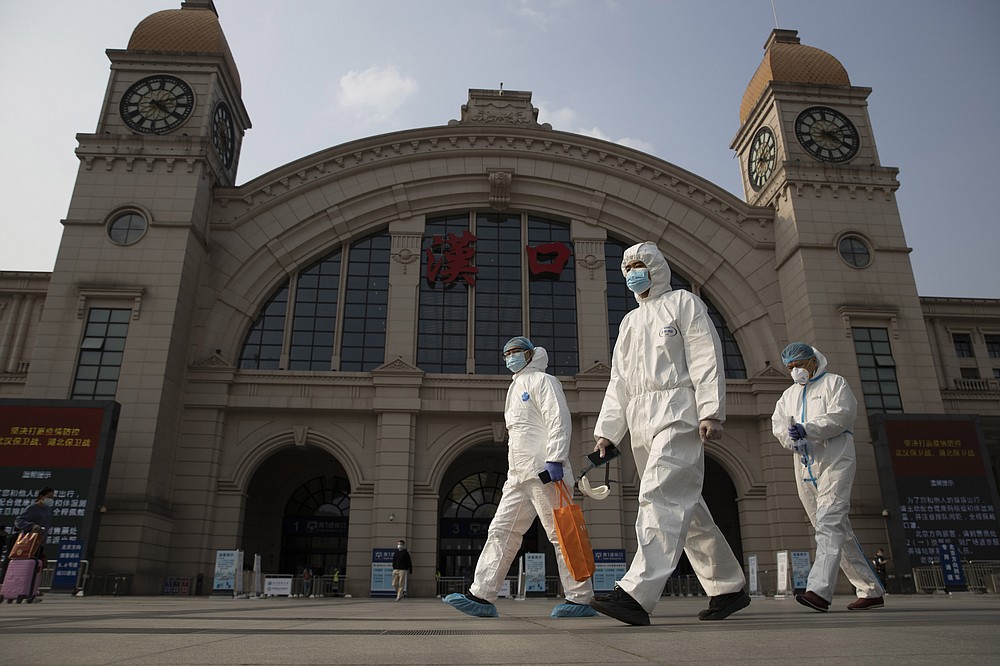 FILE - In this April 7, 2020, file photo, workers in protective suits walk past the Hankou railway station on the eve of its resuming outbound traffic in Wuhan in central China's Hubei province. China says a group of experts from the World Health Organization are due to arrive Thursday, Jan. 14, 2021, for an investigation into the origins of the coronavirus pandemic. A one-sentence announcement from the National Health Commission on Monday, Jan. 11, said the experts would be meeting with Chinese counterparts but gave no other details.(AP Photo/Ng Han Guan, File) 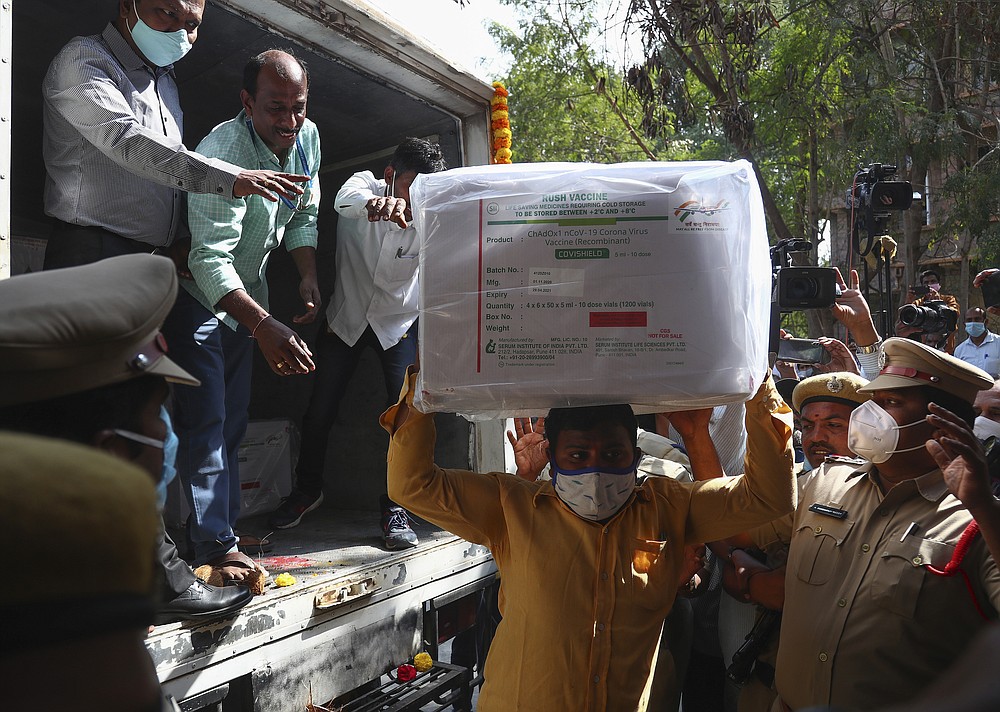 Health workers shift a box containing COVID-19 vaccine from a vehicle to a cold storage at Commissionerate of Health and Family Welfare in Hyderabad, India, Tuesday, Jan. 12, 2021. On Jan. 16 India will start the massive undertaking of inoculating an estimated 30 million doctors, nurses and other front line workers, before attention turns to around 270 million people who are either aged over 50 or have co-morbidities. (AP Photo/Mahesh Kumar A.) 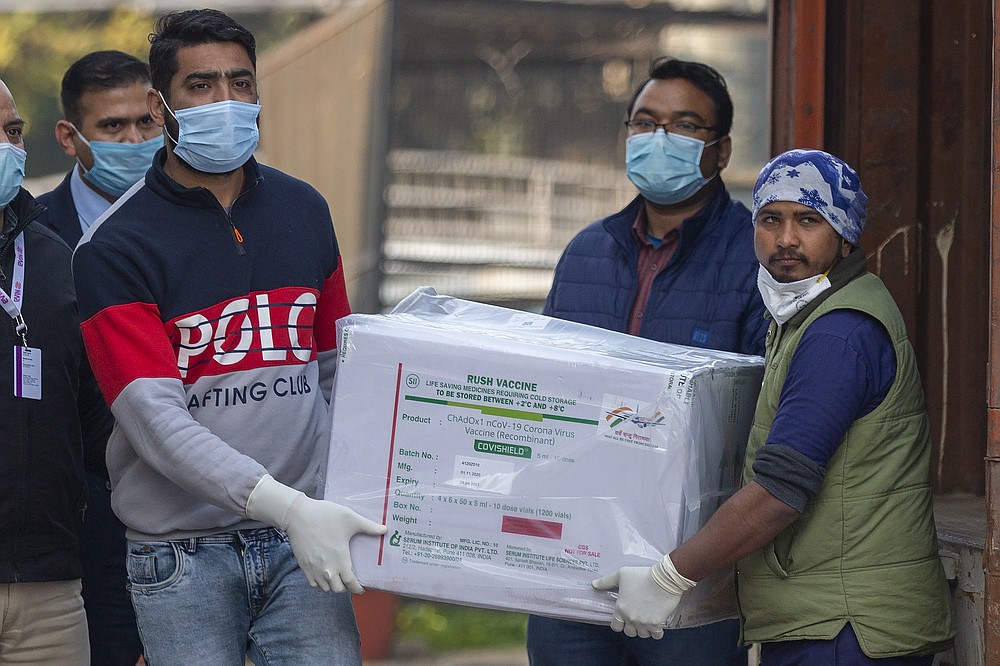 Health workers shift a box containing COVID-19 vaccine from a vehicle to a cold storage at Rajiv Gandhi Super Speciality hospital in New Delhi, India, Tuesday, Jan. 12, 2021. On Jan. 16 India will start the massive undertaking of inoculating an estimated 30 million doctors, nurses and other front line workers, before attention turns to around 270 million people who are either aged over 50 or have co-morbidities.(AP Photo/Altaf Qadri) 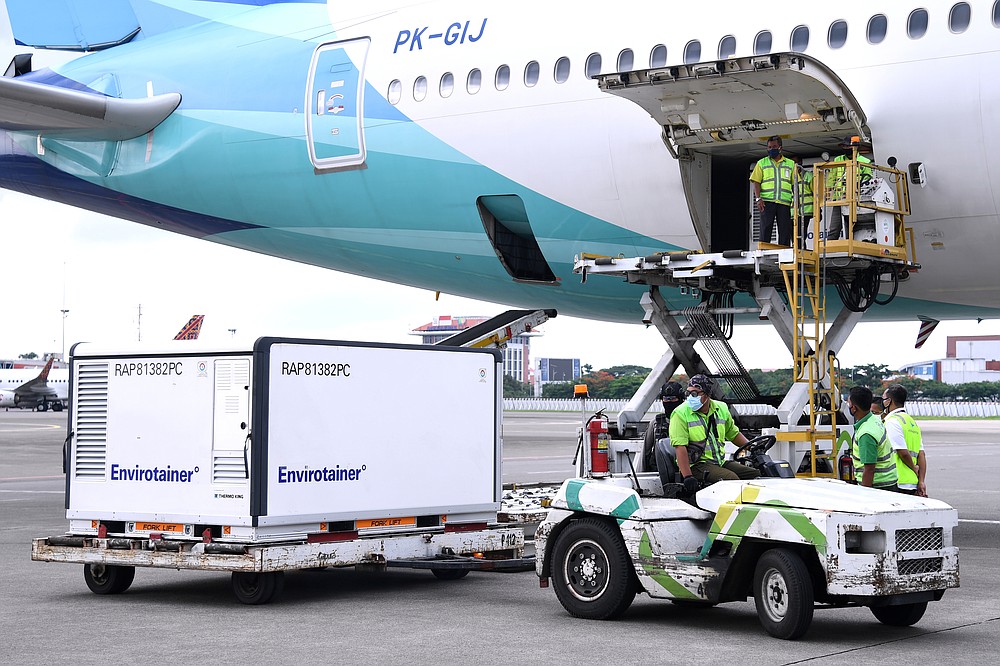 In this photo released by the Indonesian Presidential Palace, workers unload a container containing experimental coronavirus vaccines made by the Chinese company Sinovac from the cargo bay of a Garuda Indonesia plane at the Soekarno-Hatta International Airport in Tangerang, Indonesia, Tuesday, Jan, 12, 2021. Indonesia's Food and Drug Authority has green-lighted emergency use of the COVID-19 vaccine produced by China-based Sinovac Biotech Ltd., with vaccinations of high-risk groups expected to start later this week. (Indonesian Presidential Palace via AP) 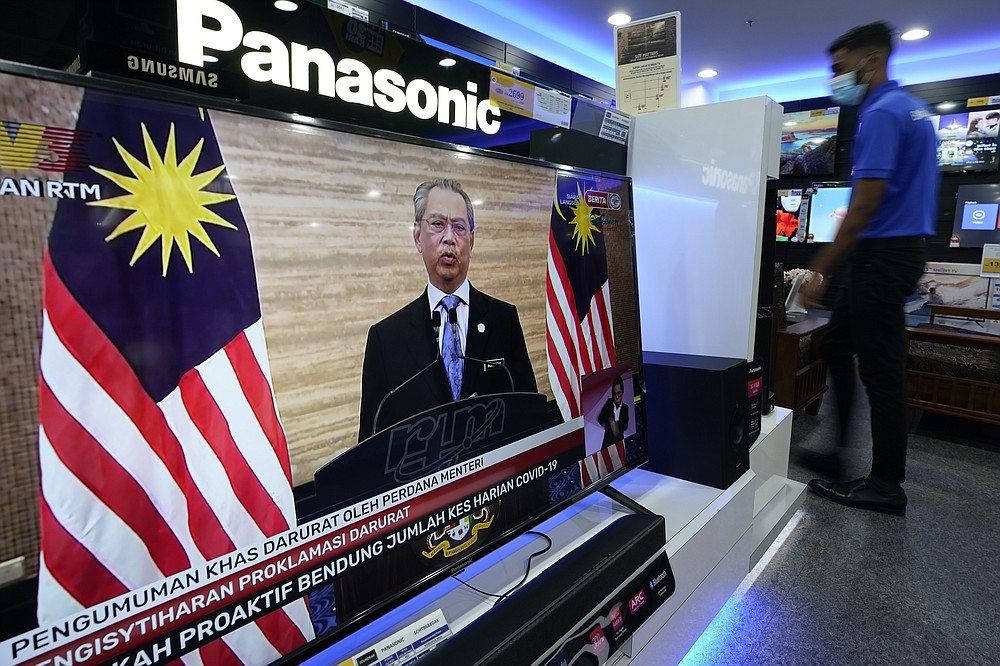 An electronic shop worker wearing a face mask walks near a television showing a live broadcast of Malaysian Prime Minister Muhyiddin Yassin at a shopping outlet in Kuala Lumpur, Malaysia, Tuesday, Jan. 12, 2021. Malaysia's king Tuesday approved a coronavirus emergency that will prorogue parliament and halt any bids to seek a general election in a political reprieve for embattled Muhyiddin. (AP Photo/Vincent Thian) 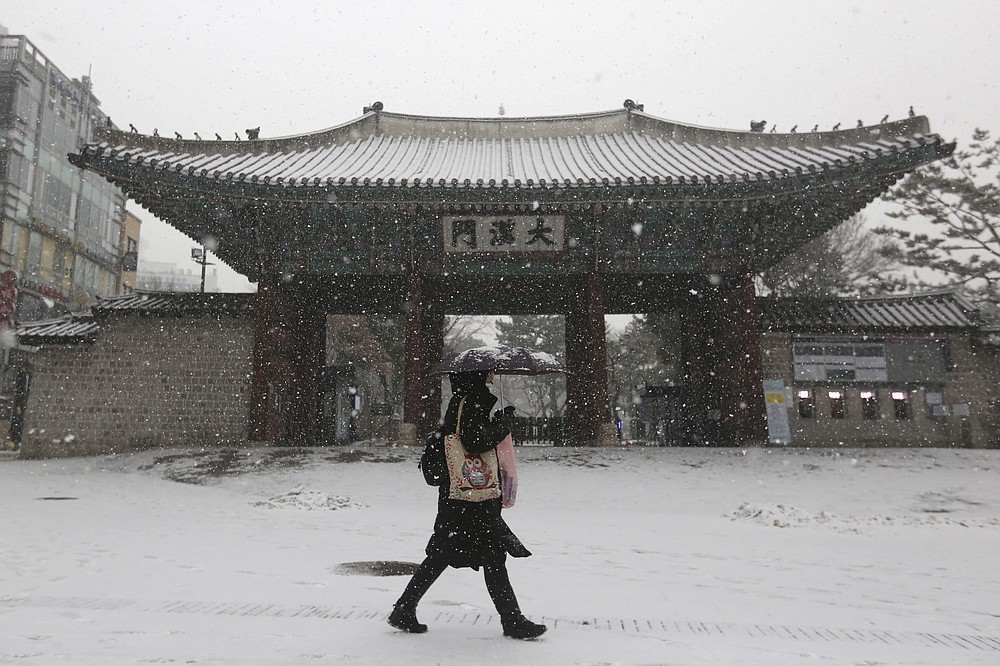 A woman wearing a face mask as a precaution against the coronavirus passes by the main gate of the Deoksu Palace in the snow in Seoul, South Korea, Tuesday, Jan. 12, 2021. (AP Photo/Ahn Young-joon)