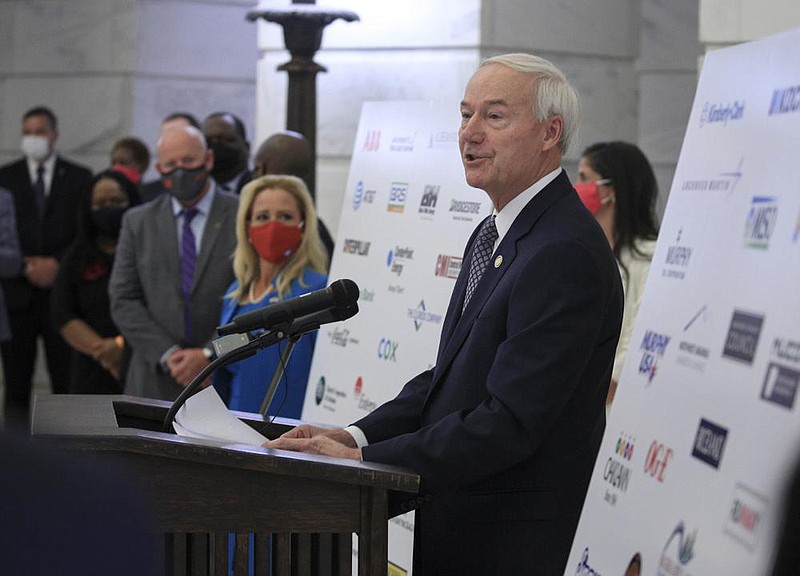 FILE — Gov. Asa Hutchinson speaks in Little Rock at the Capitol during a press conference to reveal a draft of a proposed hate-crime law in this Aug. 19, 2020 file photo . (Arkansas Democrat-Gazette/Staton Breidenthal) - Photo by Staton Breidenthal

Gov. Asa Hutchinson made a vigorous push for proposed hate crimes legislation in his address to lawmakers Tuesday, while Republicans in the Legislature continued to express skepticism on the practicality of passing such a law.

Drawing on support from the business community, which has argued that passing such a law would bolster Arkansas' out-of-state reputation and the ability of companies to attract recruits, the governor read endorsement letters Tuesday from the leaders of IBM and Fifty for the Future, an economic development non-profit based in Little Rock.

Arkansas is one of only three states in the nation without a hate crimes law, joining Wyoming and South Carolina.

The bill touted by Hutchinson and drafted by his nephew, state Sen. Jim Hendren, R-Sulphur Springs, includes sentence enhancements for certain crimes committed because of the victim's race, ethnicity, sex, religion, gender identity, sexual orientation or other identifying characteristics, such as military service.

"The only way we can come together on this issue is for us to listen to each other and step into others' shoes who live in a different world than ours," Hutchinson said.

Standing against the governor and his allies in the Legislature are conservative Republicans who have cast the hate crimes bill as an attack on religious liberty because of its protections for LGBTQ Arkansans. The bill has already drawn opposition from the Arkansas Family Council, an influential, faith-based advocacy organization.

In the Senate, particularly, the bill faces daunting odds in the chamber's Judiciary Committee, which is controlled by a 7-1 Republican majority, several of whom have already expressed opposition to the bill.

A member of the Judiciary Committee, Sen. Trent Garner, R-El Dorado, tweeted Sunday that the hate crimes bill "is extremist, it weaponizes hate against people of faith, and adds inequality to our justice system."

Garner said Tuesday that his objections to the bill went beyond the provision granting protections to LGBTQ people, calling the bill "fundamentally flawed" and decrying Hutchinson and Hendren for having the bill "shoved down our throats."

Even more moderate Republicans remained cautious Tuesday when asked about the proposal.

Rep. Mark McElroy, R-Tillar, a former Democratic lawmaker who switched parties and represents a majority-Black district, said Tuesday that he'd have to read the bill and survey people in his district to see where they stand.

"I really can't say, the devil's in the details on some of this," McElroy said. "When we get into the bill, there might be parts of it that everybody supports, then there might be different parts of it where one side would oppose or the other would oppose. I'm just going to be open minded and be a true representative and let the people tell me which way we should go on this."

Hendren said Tuesday that at least one colleague had approached him about limiting the number of protected classes in the bill to make it more palatable, but Hendren said he made clear that he would not do so.

"I'm not going to be a part of a bill that does not include those groups," including victims who are targeted because of their gender identity or sexual orientation, Hendren said.

Democrats in the Legislature, while largely supportive of a hate crimes bill, are also likely to oppose any attempt to remove those protections, according to Democratic Party of Arkansas Chairman Michael John Gray.

"There is a real sentiment up there that if you remove the protections around LGBT, then this bill would have an easier passage," Gray said. "It's not about what's easier, it's about what's right."

Hendren said Tuesday that he and the bill's co-sponsors had not yet decided whether to begin running the bill on the House or Senate end. The filed version of the legislation, currently on the Senate end, is Senate Bill 3.

The sponsor of the bill in the House, state Rep. Fred Love, D-Little Rock, could not be reached for comment Tuesday.