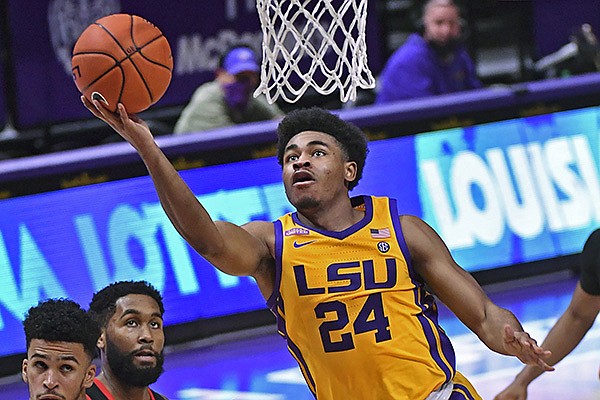 LSU guard Cameron Thomas (24) gets the layup against Georgia during the first half of an NCAA college basketball game Wednesday, Jan. 6, 2021, in Baton Rouge, La. (Hilary Scheinuk/The Advocate via AP)

FAYETTEVILLE — LSU Coach Will Wade said Tuesday morning it will be a game-time decision whether Tigers freshman guard Cam Thomas — the SEC’s leading scorer — plays against the University of Arkansas on Wednesday night in the Maravich Assembly Center.

Thomas, who is averaging 22.3 points, injured his right ankle less than two minutes into the Tigers’ 75-61 victory at Ole Miss last Saturday night.

After going to the bench, Thomas briefly came back into the game, but he clearly was limping.

Wade said Thomas “did a little bit of shooting” Tuesday morning after not practicing on Monday.

“We’ll see what he can do this afternoon when he can go through a workout and practice,” Wade said. “Then we’ll see how he feels tomorrow. So he’ll be a game-time decision.”