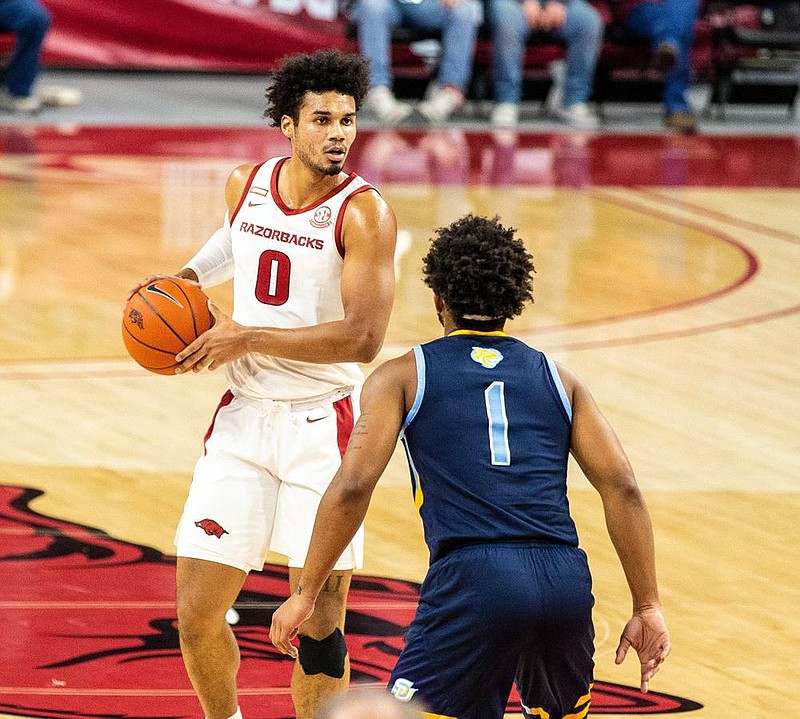 The Razorbacks are down four scholarship players because of injuries and a transfer sitting out.

Justin Smith, a 6-7 senior graduate transfer who started the first nine games and is averaging 11.6 points and 7.1 rebounds, continues to recover from right ankle surgery he underwent on Jan. 1.

Smith, injured in Arkansas' 97-85 victory at Auburn on Dec. 30, will miss his fourth consecutive game when the Razorbacks (10-2, 2-2 SEC) play the Tigers (8-2, 3-1) in the Maravich Assembly Center in Baton Rouge. He has been projected to miss three to six weeks.

"Justin has not done anything with our team as of today at all," Musselman said before Monday's practice. "Whether he tries to jump or shoot jump shots, we'd like to start getting him into that fold."

[Video not showing up above? Click here to watch » https://www.youtube.com/watch?v=uR_fjlEKOpo]

"We'd like him to start to try to come back," Musselman said. " I think he did do the underwater treadmill.

"I'd love it if he could do some non-contact stuff. But I don't know if it's just going to be shooting drills or what until they give me the OK."

"He does feel good," Musselman said. "But before he plays, at least for a day or two, he's going to have to cut and do some things non-contact and then get into contact."

Sophomore point guard Khalen "KK" Robinson will miss the rest of the season after undergoing surgery on his right foot Sunday to repair a bone fracture.

Robinson played off the bench in the first 11 games and averaged 2.6 points.

"I think it's a blow for us because one, the stuff that happens behind closed doors," Musselman said of Robinson's improvement in practice. "He's a young player. All of our freshmen continue to develop. They continue to get better, which is what you expect if you have a culture of work. And KK has had an incredible work ethic."

"Your practice for a basketball team is much different than maybe a football or a baseball team because we just have smaller numbers," Musselman said.

Abayomi "Baybe" Iyiloa, a 6-9 junior who redshirted last year after transferring from Stetson, has yet to go through a full-speed practice after having surgery last summer to repair a torn anterior cruciate ligament in his right knee.

Two years ago, Iyiloa averaged 10.8 points and 7.6 rebounds for Stetson when Arkansas assistant Corey Williams was the Hatters' head coach.

Musselman estimated Iyiola might be ready to play in early February.

"Baybe's just been working really hard," Musselman said. "Optimistically it would be right around now [for his return], but he's still got a few things that the doctor would like [to see] from a strength standpoint.

"He's getting close. ... Maybe first week or two in February is when I think he'll be cleared."

The 6-7 Johnson joined the Razorbacks for practice in late December after transferring from the University of Arkansas at Little Rock.

Johnson -- who averaged 11.0 points, 6.7 rebounds and 2.2 assists last season to help UALR win the Sun Belt Conference championship -- is seeking a waiver from the NCAA that will allow him to be eligible to play for the Razorbacks this season.

Musselman said Arkansas officials are still waiting to hear a decision from the NCAA on Johnson's waiver request.

"We haven't heard either way," Musselman said. "But we understand that's a process and we don't really have any control over it. But he's practicing and working hard and in the middle of his player development stuff."

Seven of Arkansas' nine available scholarship players have started at least one game and five have led the team in scoring, so Musselman has options as far as lineups and rotations.

"I think we have really good chemistry," Musselman said. "I think our guys are cheering for each other no matter who it is."