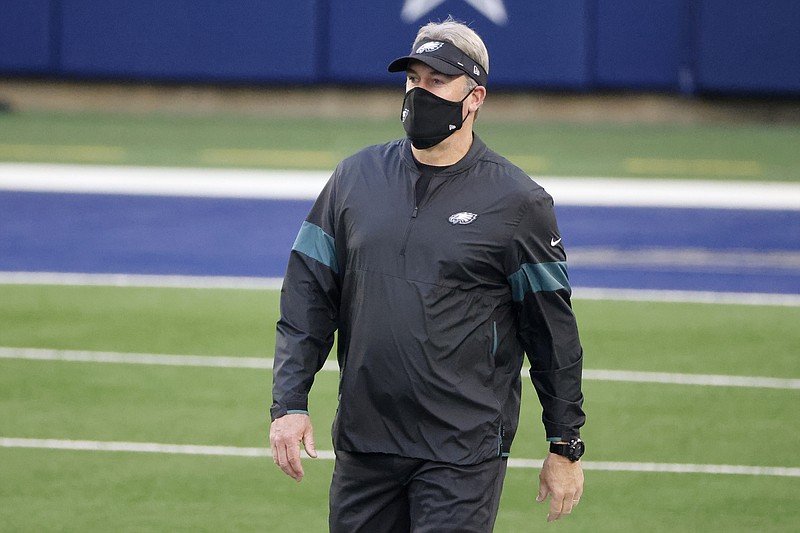 PHILADELPHIA -- Doug Pederson lost his job Monday less than three years after he led the Philadelphia Eagles to the franchise's only Super Bowl title.

Pederson was 42-37-1 in five seasons. He guided the Eagles to two division championships and three playoff appearances before going 4-11-1 in 2020.

Owner Jeffrey Lurie made the decision after meeting with Pederson last week and again Monday.

"Very few people probably after success deserve to lose their job," Lurie said. "This is much more about the evaluation of whether the Eagles moving forward, our best option is to have a new coach and that's really what it's about. ... He did not deserve to be let go."

Pederson had two years remaining on his contract. Lurie said he wouldn't be surprised if another team hired Pederson before the end of the week.

"Although I am disappointed that this chapter of my career has come to an end, I am extremely proud of what we accomplished together," Pederson said in a statement.

"Through all the ups and downs, one thing remained constant about our team -- an unwavering commitment to battle through adversity and to achieve our goals not as individuals, but as a collective unit. There is no better example of that than when we celebrated the first Super Bowl championship in Eagles history together with our city. That is a memory we will all cherish forever."

Pederson's loyalty to his coaching staff and frustration with the front office's interference became a major issue, according to a person familiar with the decision who spoke to The Associated Press on condition of anonymity because of the sensitive nature of the conversations. The person also said Pederson and General Manager Howie Roseman weren't on the same page regarding many personnel moves, including draft picks and use of veteran players.

The team's draft failures in recent years from taking wide receiver J.J. Arcega-Whiteside over DK Metcalf in 2019 to selecting wideout Jalen Reagor one pick before Justin Jefferson in 2020 contributed to the offense's struggles along with numerous injuries and quarterback Carson Wentz's poor performance.

"I have real confidence that our football operations, led by Howie, can not only repeat the performance of 2016 until now, and once again, create a dominant football team that can really maximize every aspect of its potential," Lurie said.

Lurie indicated Pederson wasn't on board with rebuilding.

"It's a transition point, and we've got to get younger and we have to have a lot more volume of draft picks and we have to accumulate as much talent as we possibly can that is going to work in the long run with a focus on the midterm and the long term and not on how to maximize 2021," Lurie said. "And it's almost not fair to Doug, because his vision has to be: What can I do to fix this right away and what coaches can I have that can help me get to a smoother 2021?"

Pederson benched Wentz for the final four games after the quarterback had the worst season of his five-year career and started rookie Jalen Hurts. Pederson had said repeatedly he was confident he could fix Wentz and get him back on track.

Wentz's $128 million, four-year contract kicks in this year and he knows the Eagles control whether to keep him or trade him. Wentz has been taking time away to reflect on his situation before meeting with the team to discuss his future, a person close to the situation told the AP last week. Wentz was frustrated with his season and unhappy that he got benched, but he had no input into Pederson's firing, two people said.

"Carson and Doug got along way better than people think," a teammate told the AP on Monday. "That stuff got exaggerated."

The player spoke on condition of anonymity because he wasn't authorized to discuss private conversations.

Wentz hasn't spoken to reporters since Dec. 6. He didn't immediately return a phone call from the AP on Monday.

Pederson was a starting quarterback in Philadelphia in 1999 and later served as an assistant coach under Andy Reid with the Eagles and Kansas City Chiefs. The Eagles hired him in January 2016 after abruptly firing Chip Kelly a month earlier.

"He's a close friend, he's a family friend and Doug is family to me," Lurie said.