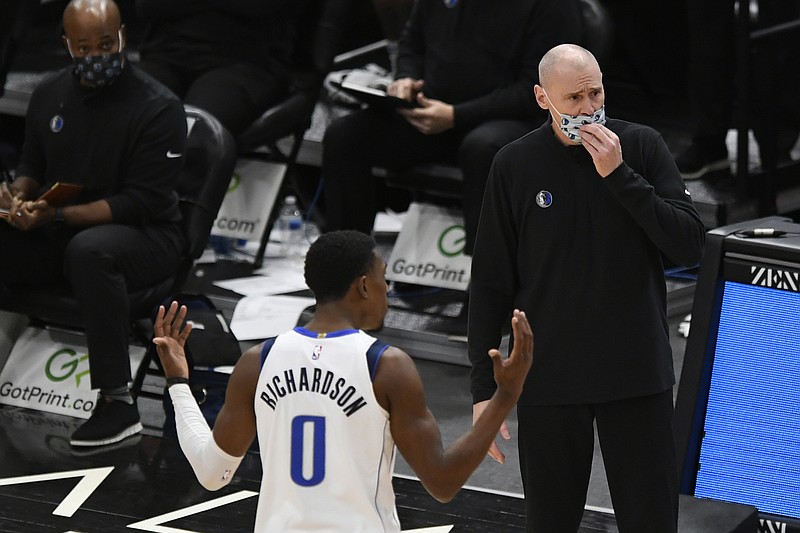 Dallas Mavericks head coach Rick Carlisle and Josh Richardson (0) argue with referees after Richardson was called for a foul during the second half of an NBA basketball game against the Chicago Bulls, Sunday, Jan. 3, 2021, in Chicago. (AP Photo/Paul Beaty)

The NBA called off two more games because of covid-related and contact-tracing issues on Monday, and the Miami Heat were preparing to be without eight players -- including All-Stars Jimmy Butler and Bam Adebayo -- for several days because of possible exposure to the coronavirus.

Monday's game in Dallas between the Mavericks and the New Orleans Pelicans was postponed by the league, as well as today's matchup in Chicago between the Bulls and the Boston Celtics. The league's general managers met Monday to discuss the virus situation, with involvement from the National Basketball Players Association. The NBA's board of governors will meet Tuesday.

The latest postponements came one day after Miami's game in Boston was called off because of contact-tracing issues within the Heat. The Celtics would have been without seven players for virus-related issues for that game. Miami's Avery Bradley, who did not play in the NBA's restart bubble last season out of concern about exposure to the virus, was also ruled out of that game because of the protocols.

Added to the Heat list following contact tracing: Butler, Adebayo, Goran Dragic, Moe Harkless, Udonis Haslem, Kendrick Nunn and KZ Okpala. That does not mean any tested positive, but that tracing showed they may have been exposed to a positive person. Some may be back in time for Miami's home game Saturday against Detroit.

Another three Heat players are on the injury list, raising the question if they will have the eight required players to start games. NBA GMs, according to a person familiar with the discussion who spoke with The Associated Press on condition of anonymity because the conversations were private, talked about increasing roster sizes Monday, along with stiffening protocols about player interaction such as postgame handshakes and hugs -- as well as even more of a commitment to social distancing and mask wearing. 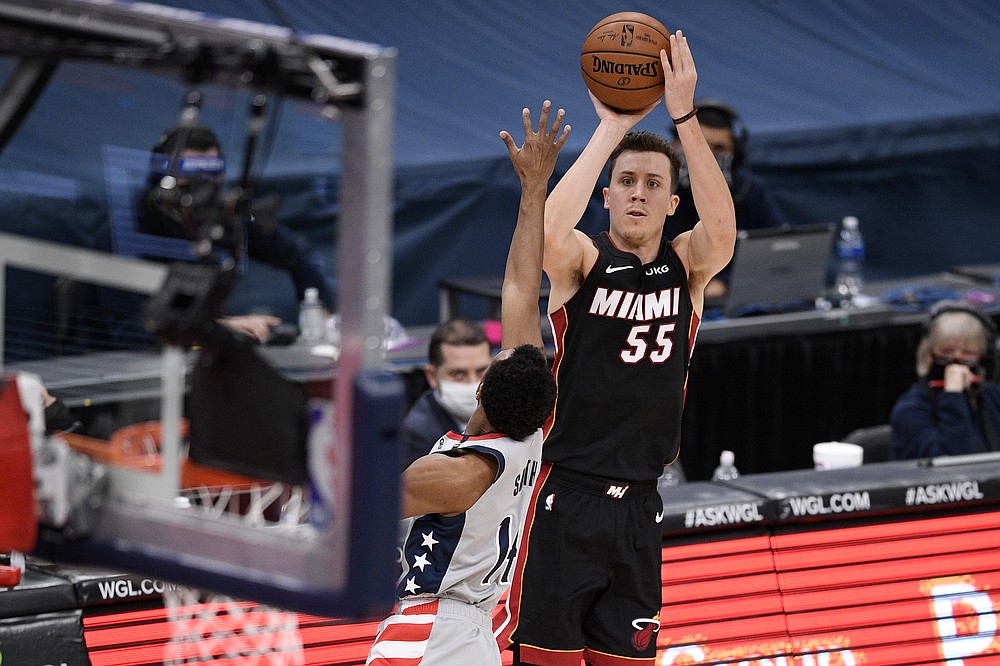 Miami Heat guard Duncan Robinson (55) shoots as he is defended by Washington Wizards guard Ish Smith (14) during the second half of an NBA basketball game, Saturday, Jan. 9, 2021, in Washington. (AP Photo/Nick Wass)