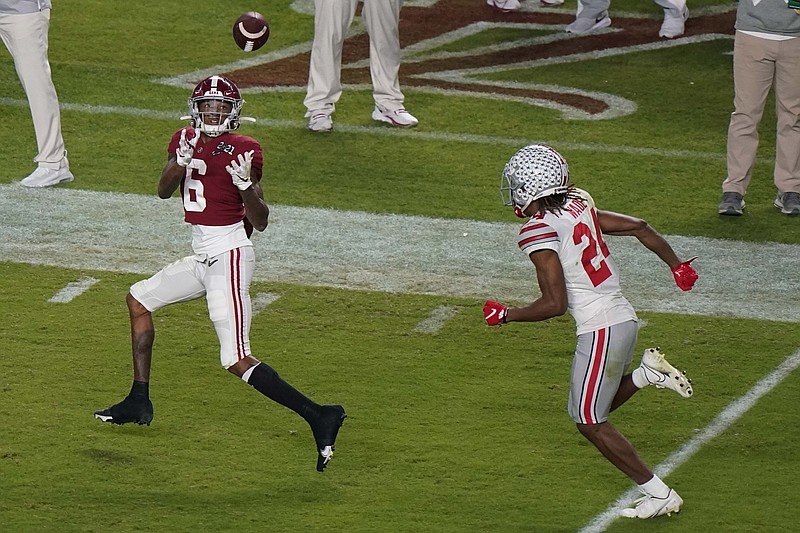 MIAMI GARDENS, Fla. -- DeVonta Smith did not catch a single pass after halftime. He didn't have to, either.

The Heisman Trophy-winning receiver from Alabama put his stamp all over the College Football Playoff Championship Game in the first two quarters, and the Crimson Tide are national champions once again. Smith had 12 catches for 215 yards and 3 touchdowns -- all those scores coming in the second quarter -- to lead the Tide past Ohio State 52-24 on Monday night.

He won everything there was to win this season: The national title, the Heisman, and became the first FBS player since Michael Crabtree in 2007 to lead the nation in receptions, receiving yards and receiving touchdowns.

Next stop, the NFL.

"Unbelievable," Smith said in the on-field interview, as garnet confetti littered the field. "We just finished writing our story. That was the whole thing of us coming back, just finishing the story that we wanted to write. And we did that."

Smith left in the third quarter, a towel draped over his right hand, covering an injury. Smith stopped on his way into the Alabama locker room to gaze at a television mounted high over the left side of the entrance, checking out one of the countless Crimson Tide highlights of the evening.

He was responsible for plenty of them.

Smith had five catches that went for more than 15 yards, including a 42-yard touchdown that pushed Alabama's lead to 35-17 just before halftime. He doesn't so much run as glides; consider, on one of his touchdowns Monday night, he evaded a defender, the end zone pylon, three photographers and a crane holding a camera -- all on the same play, and made it all look easy.

He returned to the sideline with his hand heavily bandaged, wearing sweats and a mask with the Heisman logo. His night and college career were over. But he wasn't going to miss the celebration, and knew his teammates would finish the job.

"I just believed in them from the jump," Smith said. "That's what we do. That's why you come to Bama."

Alabama fans who were at Hard Rock Stadium ooh-ed and aah-ed every time he touched the ball, just as they did two years ago when he came to that same stadium and put on a show in the Orange Bowl to help the Tide past Oklahoma and into the CFP title game that season. They lost that matchup to Clemson, denying the Tide back-to-back national titles.

Smith has that second ring now, to go with the one he helped secure as a freshman when he caught the game- and title-winning pass from Tua Tagovailoa in overtime as Alabama topped Georgia for the 2017 season's national championship.

And now, one of the questions until the NFL draft will be whether he and Tagovailoa reunite. The Miami Dolphins have the No. 3 pick in this year's draft, and if Smith is still on the board it's hard to imagine him not getting taken there by a team that won 10 games this season yet still missed the playoffs.

When they talk about how Alabama navigated an SEC-only schedule during the covid-19 season without a loss and won another national championship, some names will likely come to mind with ease.

Smith, of course, will be there. So will Nick Saban, unquestionably the most successful coach of his time. As will Najee Harris, who set the Crimson Tide single-season touchdown record with 30 scores.

And it would be a shame if they forgot Mac Jones, who bided his time behind Tagovailoa and Jalen Hurts before finally getting the keys to the Alabama offense in 2020 -- only to lead the nation in passing yards and passing efficiency, finish second in touchdown passes and cap it all off with a 464-yard, five-TD, record-setting performance in the title game.

But for all Harris did, for all Jones did, it was a skinny kid from Louisiana who was the best player in the country, the best player on the field in the season's ultimate game -- putting up all his numbers in just one half of work. 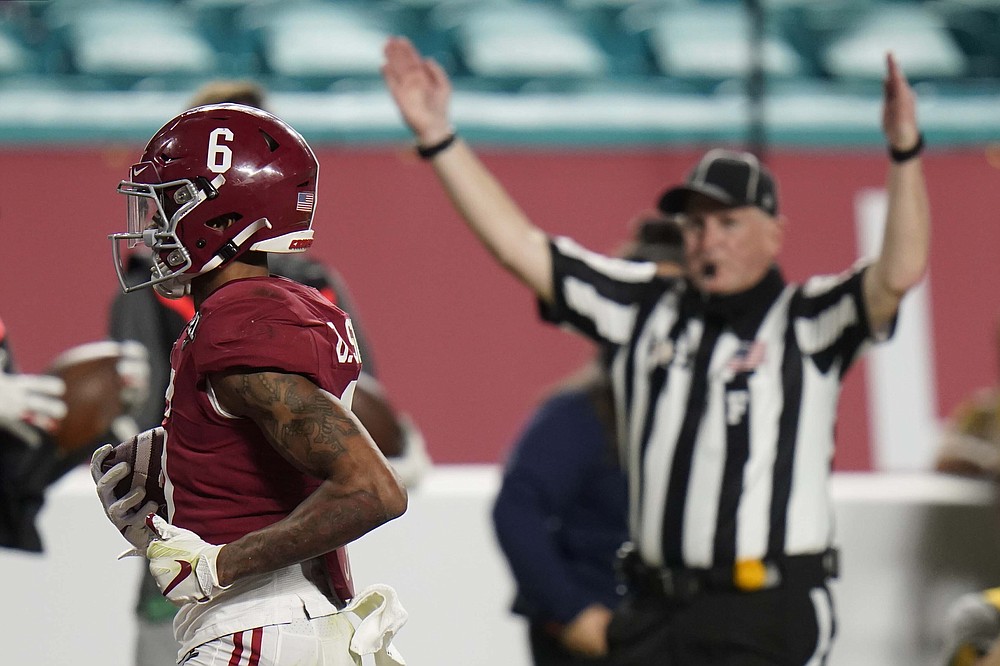 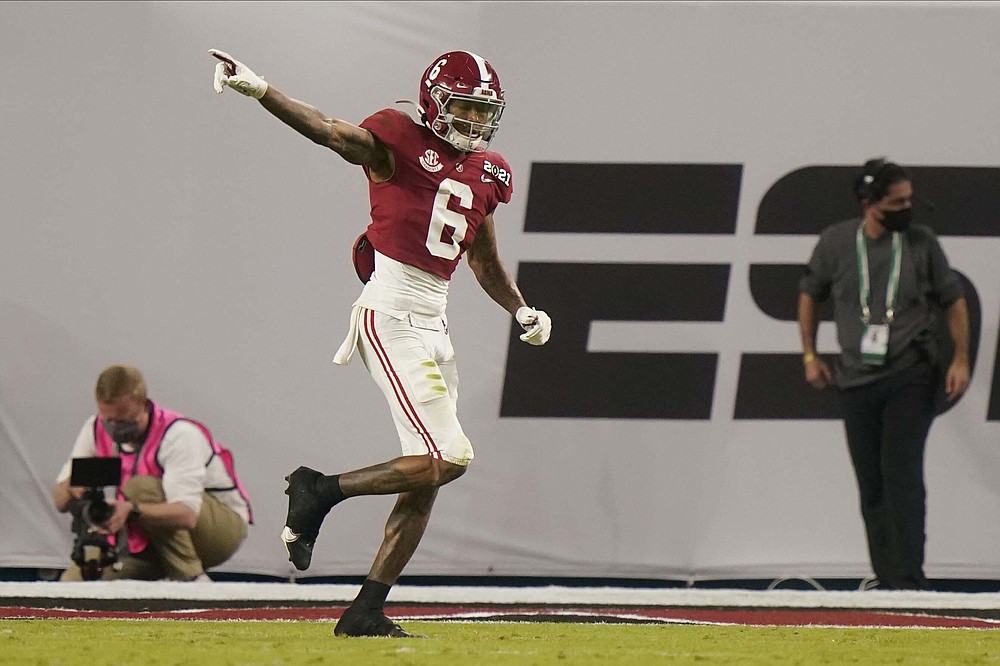 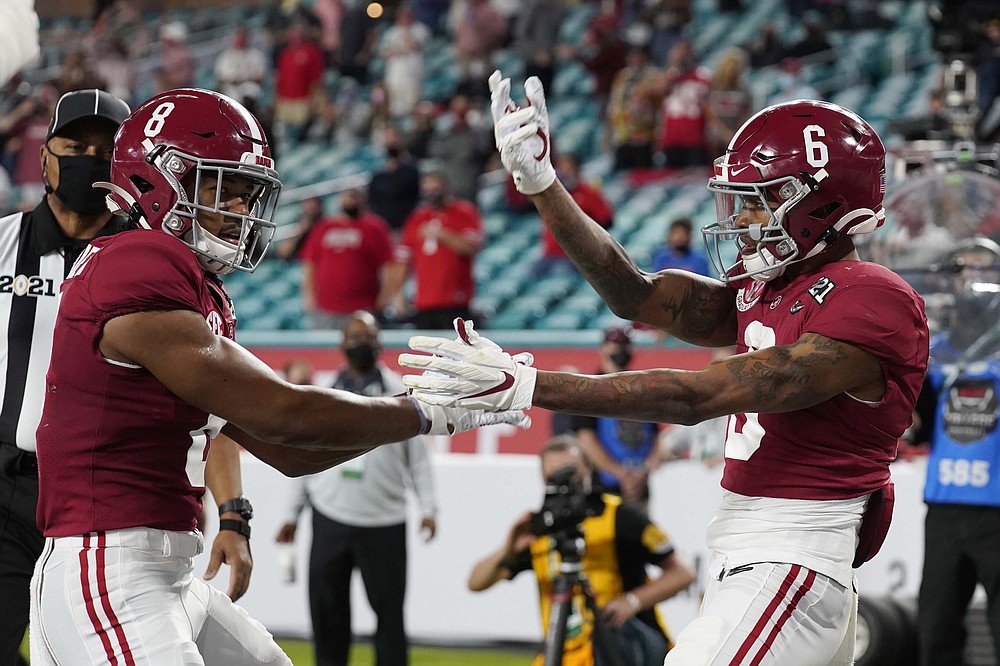 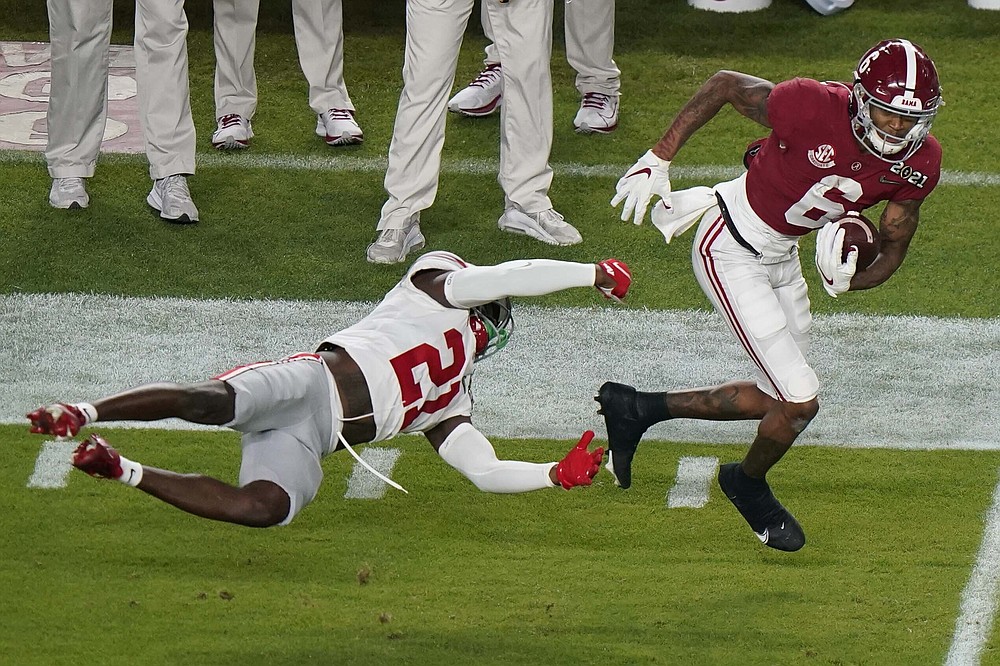