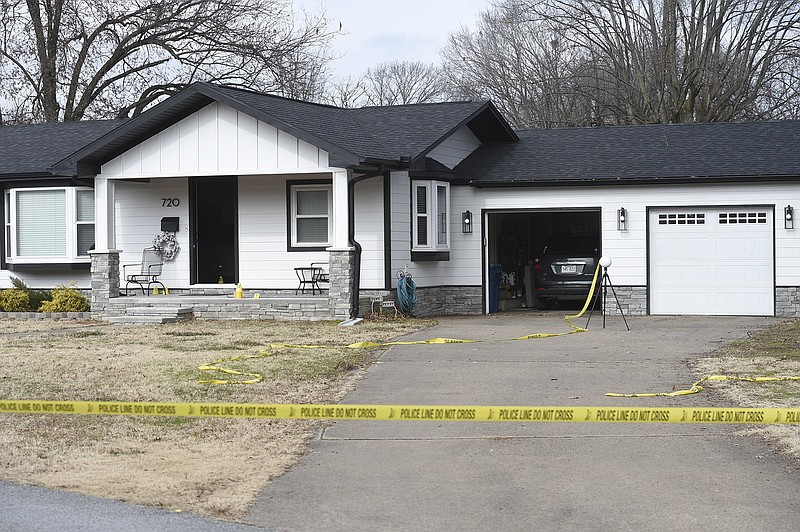 The site of an officer involved shooting is shown, Sunday, January 10, 2021 at the 720 NW 6th St. in Bentonville. Police officers shot and killed a man early Sunday morning during a domestic disturbance, according to a news release from the police department. Check out nwaonline.com/210111Daily/ for today's photo gallery. (NWA Democrat-Gazette/Charlie Kaijo) - Photo by Charlie Kaijo

BENTONVILLE -- A 37-year-old Bentonville man was shot and killed Sunday by police officers after charging at them with a knife.

Bill Sadler, a spokesman for the Arkansas State Police, identified the man as Brian Williams.

Officers went to 720 N.W. Sixth St. just after 3:15 a.m. where a husband, wife, two children and the husband's parents were inside the house, according to a news release from the Bentonville Police Department.

The officers tried to talk with those inside, according to the release. Furniture barricaded the doors.

A little after 3:30 a.m. the husband opened the front door and "charged officers with a large kitchen type knife," according to the release.

The man's father also was taken to the hospital and treated for injuries inflicted by his son; no officers were injured during the shooting, according to the release.

The State Police are handling the investigation. After the investigation is complete, Benton County Prosecuting Attorney Nathan Smith will decide whether the use of deadly force by a law enforcement officer was consistent with state law, Sadler said.