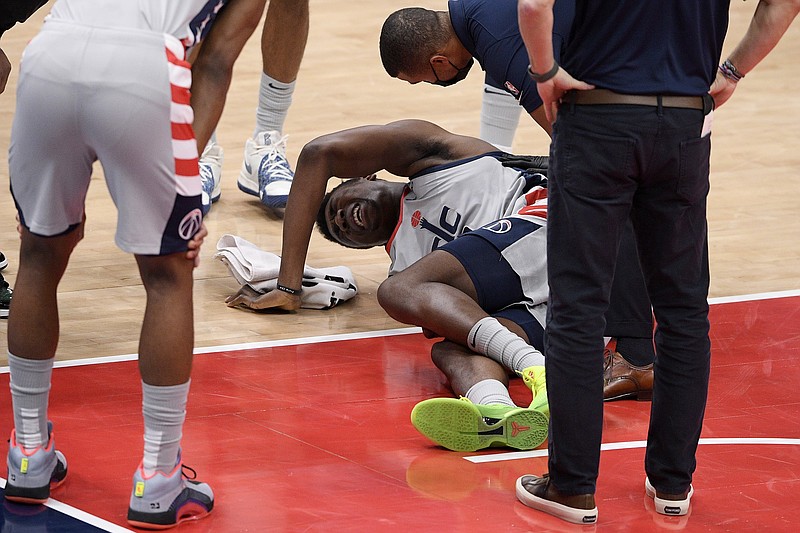 Washington Wizards center Thomas Bryant, center, lies injured on the court during the first half of an NBA basketball game against the Miami Heat, Saturday, Jan. 9, 2021, in Washington. (AP Photo/Nick Wass)

The Washington Wizards likely will be without center Thomas Bryant for the remainder of the season because of a partially torn anterior cruciate ligament in his left knee. Bryant is one of only two players who started all 10 games so far this season for the Wizards. He got hurt after incidental contact with two Miami players during the first quarter of the Wizards' loss to the Heat on Saturday night. An MRI performed Sunday confirmed the partial tear. The Wizards have not announced when Bryant will have surgery or given an exact timeline for his recovery, but the rehabilitation process following ACL tears and surgery typically take several months at a minimum. Bryant has averaged 14.3 points and 6.1 rebounds on 65% shooting this season.

South Carolina's new Coach Shane Beamer has hired NFL assistant Marcus Satterfield as offensive coordinator and Western Kentucky's Clayton White as defensive coordinator. Satterfield, who will also serve as quarterbacks coach, has spent the past three seasons working under Carolina Panthers Coach Matt Rhule. Satterfield was director of recruiting under Rhule at Baylor in 2018 before becoming the Bears' tight ends coach the next season. White has spent the past four seasons as defensive coordinator and cornerbacks coach for the Hilltoppers. He was nominated for the Frank Broyles Award, given to the top assistant coach in college football, in 2017, 2019 and 2020.

The New Jersey Devils have re-signed restricted free agent forward Jesper Bratt to a $5.5 million, two-year contract. Devils General Manager Tom Fitzgerald announced the deal on Sunday, four days before the season opener at home against the Boston Bruins. The 22-year-old Bratt will make just over $2 million this season and $3.45 next season. Bratt led the club in even-strength goals with 15 and set career highs with 16 goals and 101 shots last season. The Swede has 37 goals and 63 assists in 185 games with New Jersey.

Hubert Auriol, the first competitor to win the Dakar Rally on a motorbike and in a car, has died. He was 68. The Dakar Rally announced that Auriol died on Sunday. It did not specify a cause but the Frenchman had battled heart disease for many years. The charismatic Auriol won the race, which was then called the Paris-Dakar Rally, on a motorbike in 1981 and '83 and then in a car in 1992. Auriol later became director of the race, a position he held for nearly a decade. In recent years, he had worked as a Paris-based auto racing consultant.

Tiafoe moves on at Delray

Frances Tiafoe gained momentum Sunday in his bid for another Delray Beach Open title by winning a seesaw match against fellow American Bjorn Fratangelois, 6-4, 3-6, 6-1. Tiafoe won his first ATP Tour title as a 20-year-old wild card at Delray Beach, Fla., in 2018. His career record is 9-2 in the tournament and 62-93 elsewhere on the ATP Tour. No. 4-seeded Hubert Hurkacz of Poland also reached the quarterfinals, beating Daniel Elahi Galan of Colombia, 6-2, 6-2. Tiafoe, seeded eighth, won the final four games of the first set and dominated the final set. He lost only eight points on his first serve against Fratangelois.

Marco Schwarz salvaged Austria's tough weekend in Switzerland by winning a World Cup slalom on Sunday to lead the season-long standings. Schwarz rose from fourth place after the first run to race though fast-fading light in the afternoon and finish 0.14 seconds ahead of Linus Strasser of Germany. The powerful Austrian team had just a single top-10 placing to show from giant slaloms on the previous two days at the storied Adelboden hill cherished by its neighbor Switzerland. Dave Ryding was third, trailing Schwarz by 0.15, to give the British racer his third career podium and best result in traditional slalom for four years. 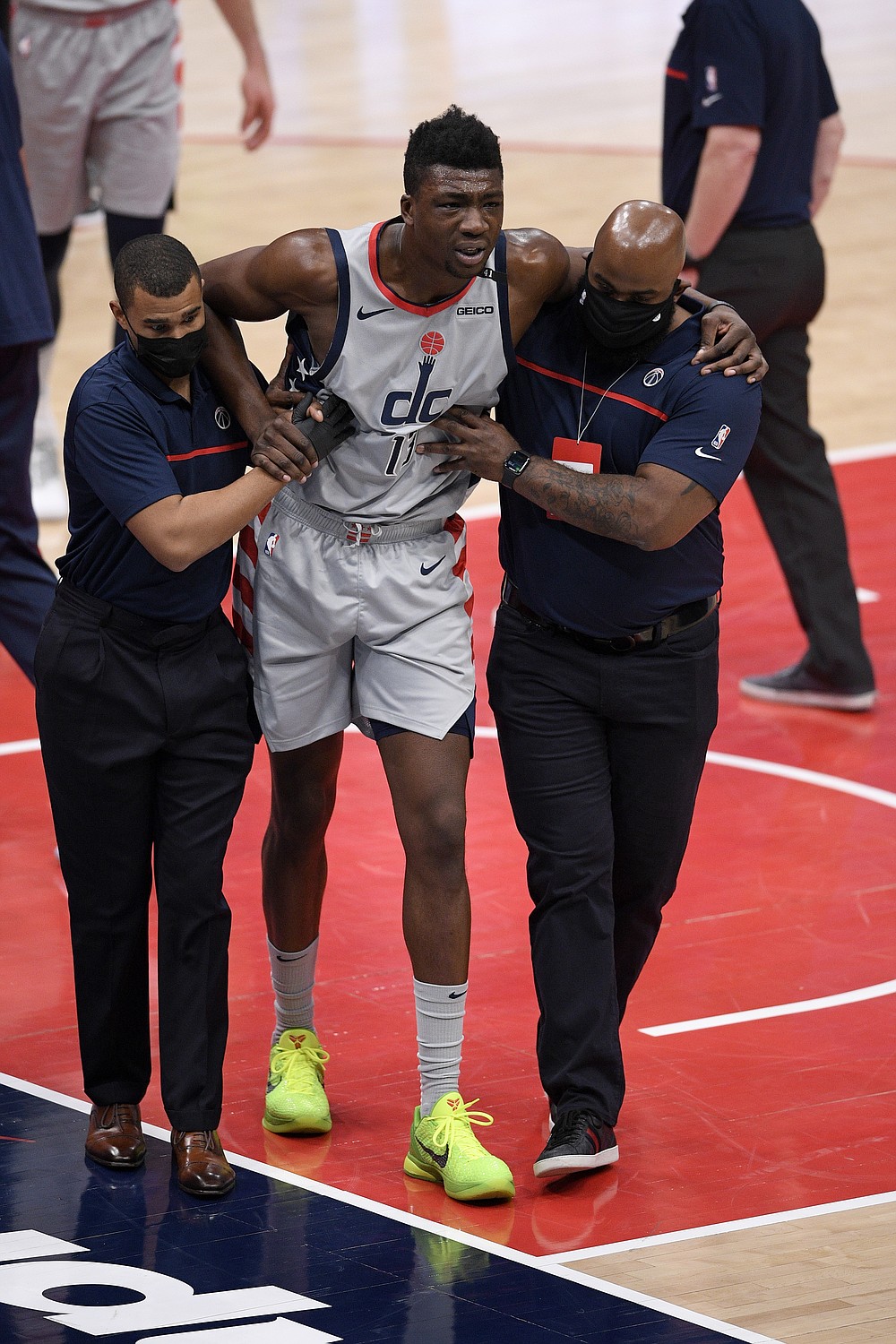 Washington Wizards center Thomas Bryant (13) is helped off the court after he was injured during the first half of an NBA basketball game against the Miami Heat, Saturday, Jan. 9, 2021, in Washington. (AP Photo/Nick Wass)