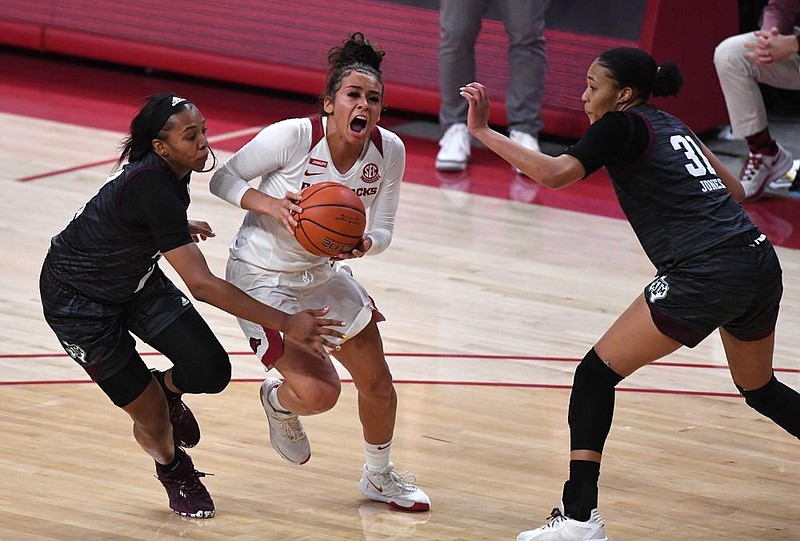 Arkansas senior guard Chelsea Dungee drives past Texas A&M’s Aaliyah Wilson toward the basket during the No. 13 Razorbacks’ loss to the No. 8 Aggies on Sunday at Walton Arena in Fayetteville. Dungee led Arkansas with 21 points, while Wilson led all scorers with 27. (NWA Democrat-Gazette/J.T. Wampler)

FAYETTEVILLE -- No. 8 Texas A&M trailed much of the fourth quarter, but sophomore Jordan Nixon came up with a pair of big plays late to make sure the Aggies left Walton Arena with a 74-73 victory over No. 13 Arkansas on Sunday afternoon.

Nixon hit a driving shot off the glass with 0.4 seconds left, and Texas A&M blocked Chelsea Dungee's attempt at the horn to give help former Arkansas Coach Gary Blair knock off his old team and the Aggies remain undefeated

There was some controversy between those final two plays. Initially, Arkansas tried for a high lob near the basket, but the game clock started before the ball touched a player and ran out. After some discussion, the clock was reset and the ball inbounded again, but Dungee's heavily guarded shot attempt in the corner was partially blocked as the buzzer sounded.

Arkansas Coach Mike Neighbors was visibly upset at the end but said he was still unsure what happened on the final play.

"I'm looking at lots of things," Neighbors said. "It's frustrating. It comes down to that, but there are so many other things early in the game that mattered just as much.You hate to see a game that good end that way.

"For our defensive stop, you guarded as well as you could until the last [0.4], and a great player made a great shot."

Arkansas (10-4, 1-3 SEC), which played without starting guard Amber Ramirez because of a concussion, opened the fourth quarter with an 11-0 run to grab a 61-56 advantage on Dungee's three-pointer with 5:32 left. But the Aggies (12-0, 3-0) clawed back behind the play of Nixon and senior Aaliyah Wilson, who played her freshman year at Arkansas before transferring to Texas A&M.

Dungee, who battled first-half foul trouble, finished with a team-high 21 points, including 15 in the final two quarters. Makayla Daniels added 16 -- but had just one in the fourth quarter. Destiny Slocum and Jailyn Mason had 13 points apiece.

Nixon's three-point play pulled the Aggies within 73-72 with 30.6 seconds left. Wilson then poked the ball away and forced a held ball, which gave possession to the Aggies with 23.2 seconds remaining. Nixon then came up with what turned out to be the game-winner.

Wilson, who also guarded Dungee, led four Aggies in double figures with a game-high and career-high 27 points for Texas A&M. N'Dea Jones added a double-double with 12 points and a game-high 14 rebounds, while Kayla Wells added 11 points and Cierra Johnson had 10.

"It was huge," Nixon said. "Huge. Defense wins games, I know that's cliche, but it is what it is. ... She played her heart out. I'm so proud of her to come back to Arkansas and to do what she did. She was key."

Blair couldn't have been more pleased with how his team responded down the stretch.

"We had some guards make some big-time plays for us," Blair said.

"We kept running Wilson to death. Give us credit. They took the first, second and third option away from us. Jordan made a big-time play. That's what she's all about, big-time plays."

Arkansas trailed 38-36 at halftime and 56-50 after three quarters but charged back late aided by its outside shooting. The Razorbacks made 14 three-pointers but were 9 of 12 from the free-throw line.

The Razorbacks, who have now lost three out of their last four, continue league play on Thursday when they host Florida. The Gators lost 68-58 at Georgia on Sunday.