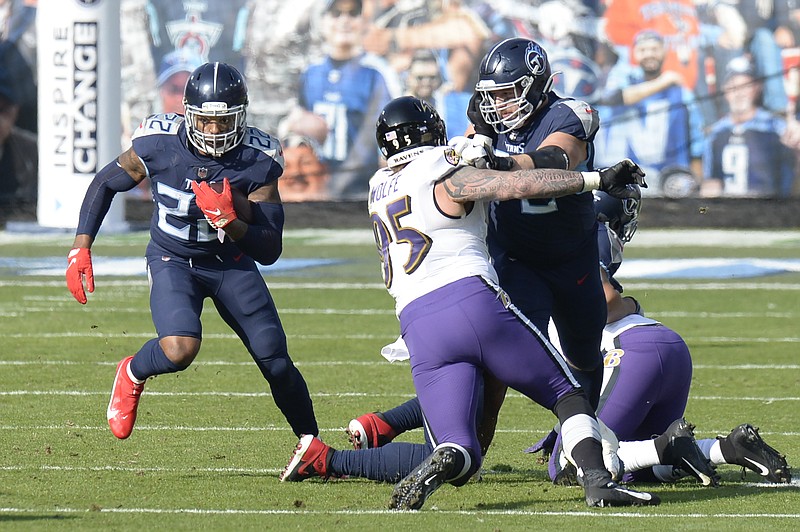 NASHVILLE, Tenn. -- Derrick Henry ran the Tennessee Titans all the way to the AFC Championship game a year ago.

On Sunday, the NFL's latest 2,000-yard running back couldn't carry the Titans past their playoff opener even with a home-field advantage.

Henry was held to 40 yards on 18 carries Sunday for his worst performance this season, and the rest of the Titans couldn't take advantage of Baltimore's focus on the back-to-back rushing champ in a 20-13 wild-card loss to the Ravens.

"This definitely is going to sting," Henry said. "Probably be in my mind for the rest of this year until we suit back up."

Henry managed just 2.2 yards a carry a week after running for a career-high 250 yards, which made him the eighth man in NFL history to top 2,000 with 2,027 yards for the season. And now he's the latest 2,000-yard rusher not to win in the playoffs, leaving Terrell Davis alone in the category as a winner.

Ravens defensive end Derek Wolfe said their goal was to keep Henry under 90 yards rushing and that the 2.2-yard average was huge.

"He's the hardest running back I've ever had to tackle," Wolfe said. "So, you've got to bring it every time you tackle him. Every touch, you've got an offensive lineman hanging off of you, so he'll run you over. I've got a ton of respect for him."

Baltimore (12-5) didn't let Henry and the Titans (11-6) get to the outside, where he's had so much success breaking into the open, by keeping five and six defenders along the line of scrimmage.

"They did a good job of trying to shorten the edge and not let Derrick kind of gain his momentum," right tackle Dennis Kelly said. "Obviously, going into the offseason, going into next year, we need to make sure we do not allow that to happen."

Henry's longest run of 8 yards came with six minutes left in the third quarter, and the Titans trailing 17-13. Henry missed the next two plays, busy on the sideline with an equipment issue.

"My shoe came off," Henry said. "Couldn't get it back on. That's what happened. My shoe just came off and trying to get it back on quick as I could."

The Titans threw incomplete on the next two plays and punted. Baltimore added a field goal, and Ryan Tannehill was intercepted on the next drive with 1:50 left.

Tennessee now is one of only three teams in the past 30 seasons to have lost playoff games in consecutive seasons after leading by double digits. Tennessee also led 10-0 in the first quarter of the AFC Championship game against the Chiefs before losing 35-24.

Pittsburgh also did it in the 1993-94 seasons against Kansas City and the Chargers, while the then-HoustonOilers did it in 1991-93 against Denver, Buffalo and Kansas City.

"We knew it was going to take more," Tannehill said. "We just didn't get it done."

The Titans had 126 yards in the first quarter, then finished with just 209 on offense for the lowest total all season. This offense had been averaging 396.4 yards per game, second only to Kansas City. The Titans also managed only a field goal after taking a 10-0 lead for their fewest points this season.

Pro Bowl wide receiver A.J. Brown had 52 yards receiving and a touchdown on three catches in the first quarter, but finished with only three more catches for 31 yards the rest of the game.

"We kind of shot our own selves in the foot not converting and doing what we were supposed to do," Brown said. 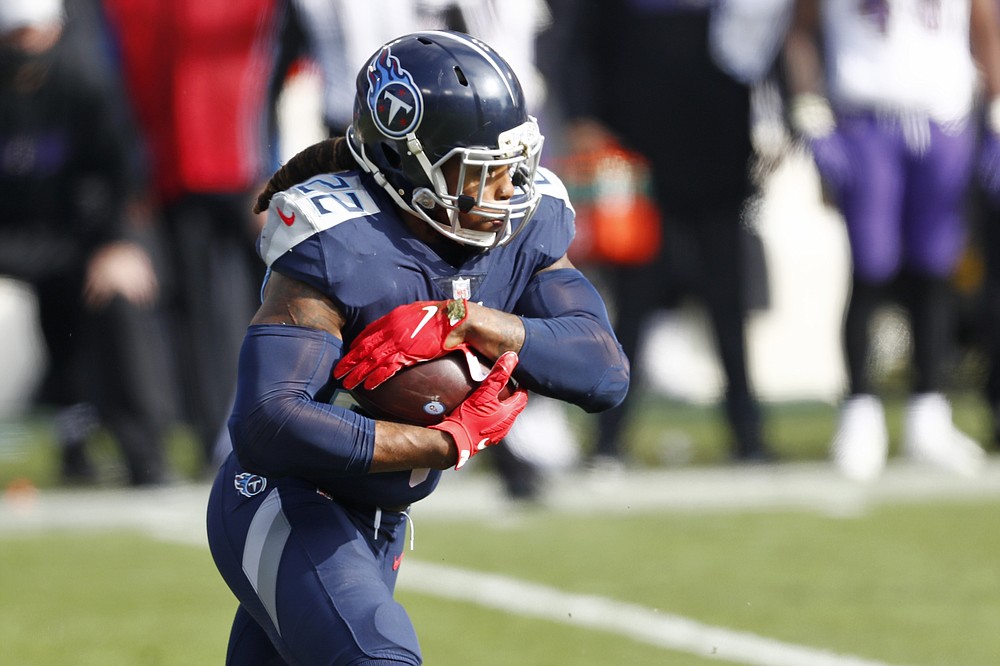 Tennessee Titans running back Derrick Henry carries the ball against the Baltimore Ravens in the first half of an NFL wild-card playoff football game Sunday, Jan. 10, 2021, in Nashville, Tenn. (AP Photo/Wade Payne) 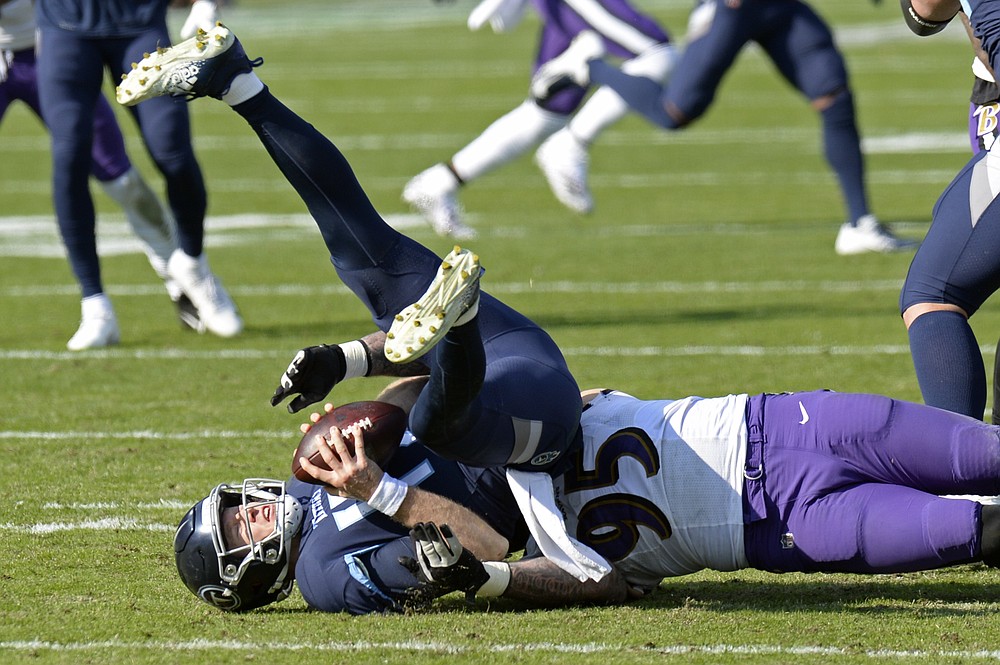 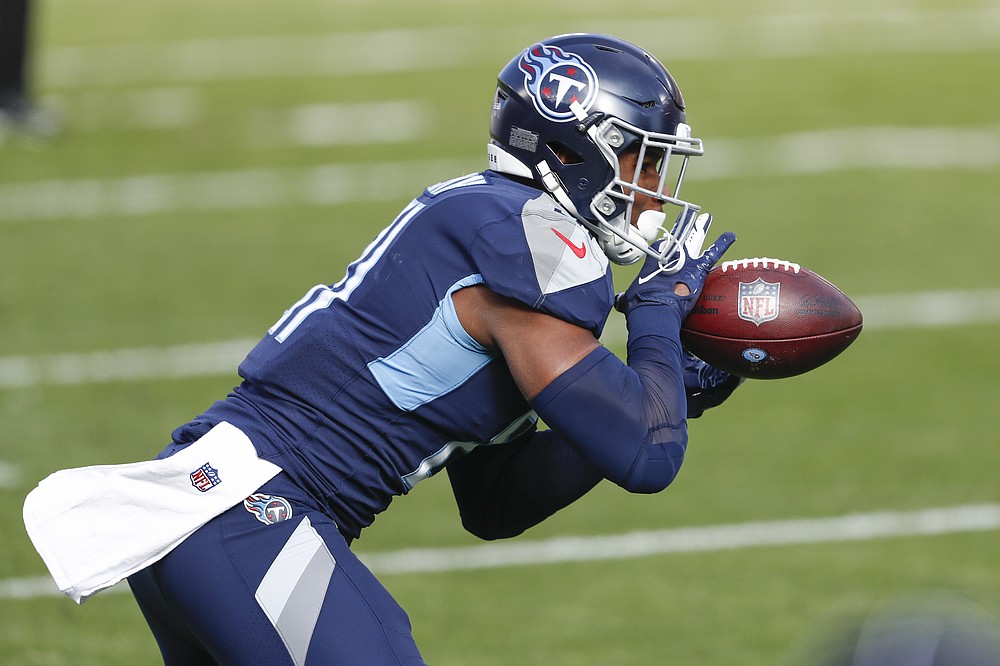 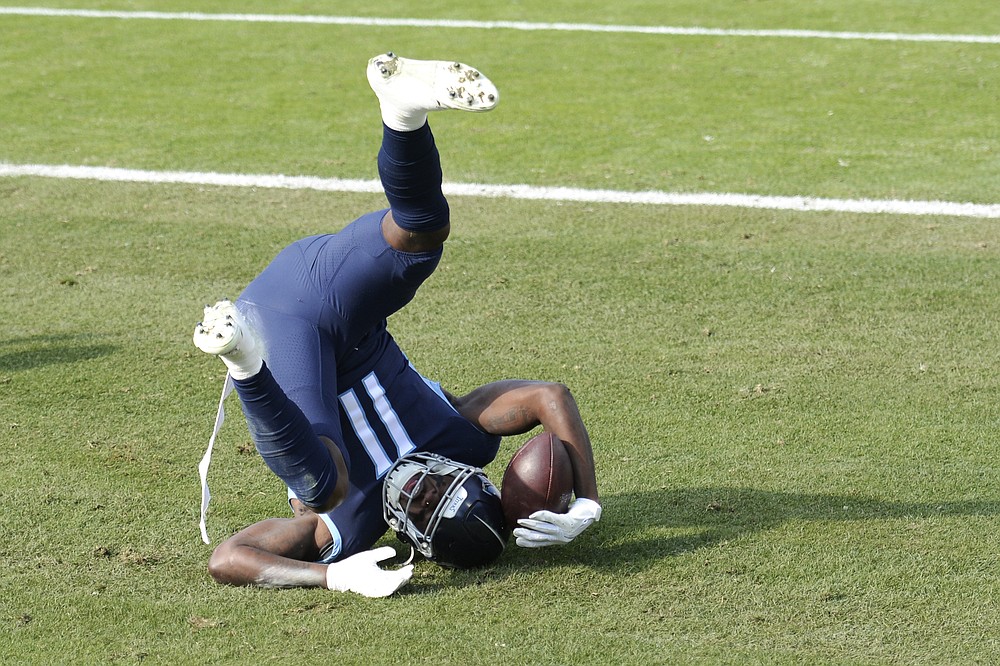