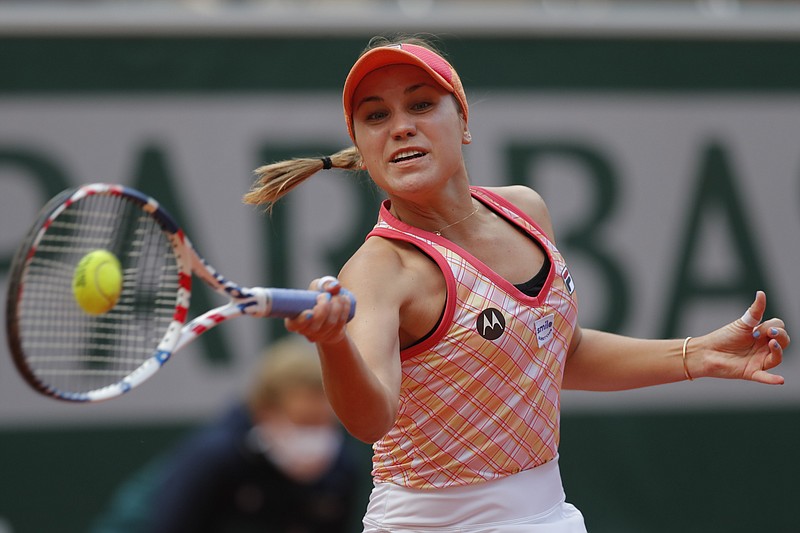 File - In this Oct. 10, 2020, file photo, Sofia Kenin, of the United States, plays a shot against Poland's Iga Swiatek in the final match of the French Open tennis tournament at the Roland Garros stadium in Paris, France. Kenin is the top-seeded woman in Abu Dhabi, where the first women’s tour-level tennis event of 2021 begins main-draw play on Wednesday, Jan. 6, 2021. (AP Photo/Michel Euler, File)

ABU DHABI, United Arab Emirates -- Australian Open champion Sofia Kenin of the United States came back from match point down to beat Yulia Putintseva and reach the quarterfinals of the Abu Dhabi Open on Sunday.

"I felt like today was more of a mental match. I practice with her quite a lot so I know her game well," Kenin said. "I'm just happy with the way that I fought even though I wasn't feeling 100% on court."

Kenin dropped the opening set for the second consecutive match in Abu Dhabi. Putintseva had match point when serving at 6-5 up in the second set, but Kenin saved the point and broke Putintseva's serve to take the set to a tiebreak.

Next up is a quarterfinal match with ninth-seeded Maria Sakkari, who beat former French Open and Wimbledon champion Garbine Muguruza 7-5, 6-4, posting 33 winners to five for the more defensive Muguruza. Kenin won her two previous matches against Sakkari, both in three sets in 2018.

Also, Elina Svitolina saved two match points in a final-set tiebreak to beat Ekaterina Alexandrova 6-2, 6-7 (5), 7-6 (8) for a place in the quarterfinals. The second-seeded Ukrainian faces another Russian opponent, Veronika Kudermetova, in the next round.

"I was just trying to be focused on every point and not let this match take away the good tennis that I played in the first set," Svitolina said.

Aryna Sabalenka recorded her 12th consecutive win in tour matches with a 6-2, 6-4 win over Ons Jabeur. The fourth-seeded Sabalenka earned a measure of revenge for her defeat to Jabeur in their only previous match in the third round of the French Open in October.

"I didn't give her any time to play, to make her trick shots," Sabalenka said. "At Roland Garros, the courts were really slow and she had time and it was really tricky tennis. I think this was the key to today's win."

Sabalenka has won every match she's played since the loss to Jabeur at Roland Garros, and finished last season with titles at the indoor Ostrava and Linz tournaments.

The win over Jabeur sets up a quarterfinal match against sixth-seeded Elena Rybakina, who beat Daria Kasatkina 6-3, 6-4 in their third-round match.