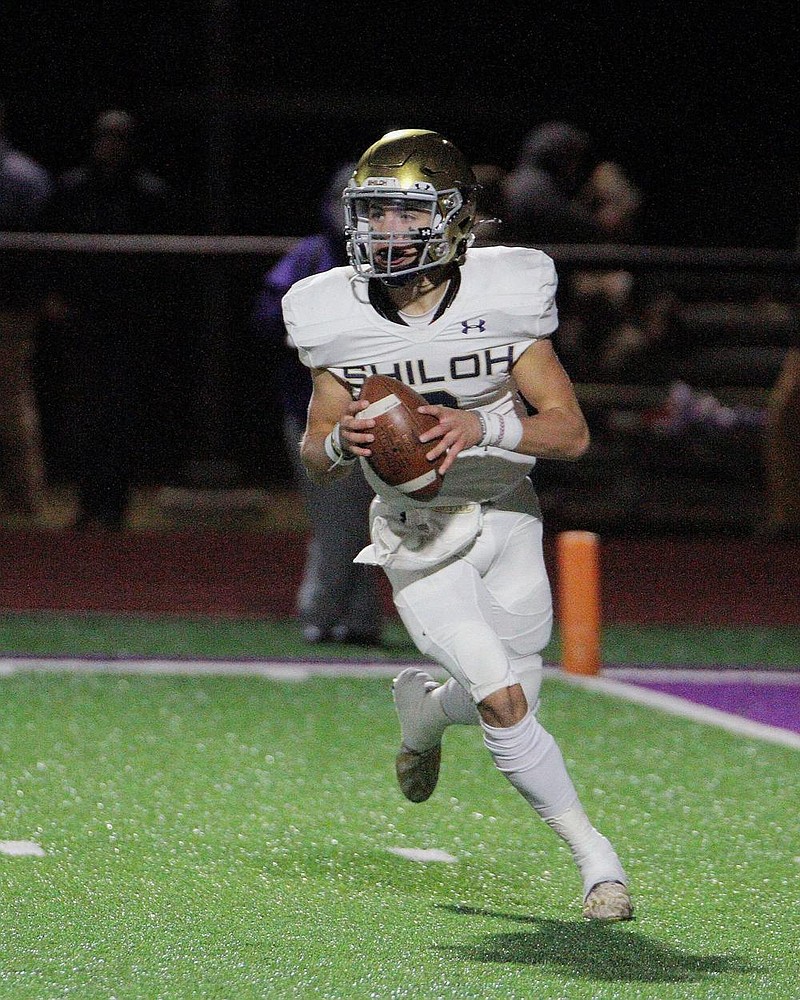 Shiloh Christian sophomore Eli Wisdom is the NWA Democrat-Gazette Division II Player of the Year. Wisdom compiled the rare 2,000-yard passing, 1,000-yard rushing season at quarterback, while also starting at cornerback, where he had 20 pass-breakups for the 4A-1 Conference champions. (Special to NWA Democrat-Gazette/Brent Soule)

Shiloh Christian was ready to end its decade-long drought of not winning a state championship.

To achieve the feat, the Saints turned to a sophomore quarterback to get it done.

Eli Wisdom took control of the Shiloh Christian offense, accounting for 47 touchdowns, and the Saints won their first state title since 2010 with a 58-20 victory over Rivercrest in the Class 4A state championship game, where he earned MVP honors.

For his accomplishments, Wisdom is the Arkansas Democrat-Gazette's All-Arkansas Preps Underclassman of the Year for the 2020 season.

Wisdom played wide receiver in junior high, but it was quarterback where he dreamed of playing since he was a little kid.

"I knew I wanted to be a quarterback," Wisdom said. "I like the pressure."

During the offseason, in which teams were forced to go virtual from mid-March until June 1 because of the coronavirus pandemic, Wisdom said he was meeting with Shiloh Christian coaches daily on Zoom.

Conaway said the meetings, while not in-person, were beneficial for Wisdom.

"He jumped on board," Conaway said. "He was dialed in and ready to go."

Two highlights for Wisdom were the Saints' comeback victory at Elkins and the state championship game.

Shiloh Christian trailed 21-0 before pulling within 21-7 at halftime against Elkins, then went on to win 49-28 thanks in large part to two touchdown runs by Wisdom. In the state championship game, Wisdom completed 17 of 21 passes for 239 yards with 3 touchdowns, and rushed for 110 yards and 3 scores on 16 carries.

Wisdom is looking to play deep into December during his junior year.

"I want to help the football program win state championships," Wisdom said. "To do it in my sophomore year was a blessing."

Wisdom at a glance

HIGHLIGHTS Passed for 2,125 yards, 23 touchdowns and 7 interceptions. Rushed for 1,464 yards and 24 touchdowns on 166 carries. … Led Shiloh Christian to a 14-1 record and Class 4A state championship, its first title since 2010. … Earned MVP honors in the state championship game.