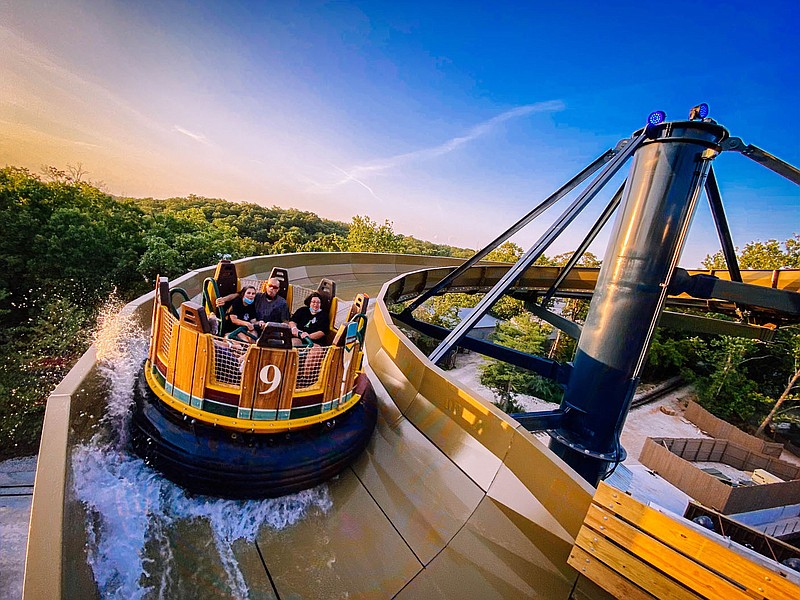 It was supposed to be a celebration 60 years in the making -- a yearlong party marking the 60th anniversary of Silver Dollar City, embellished by the opening of a new $23 million water ride in an all-new neighborhood complete with a new $4 million, 400-seat barbecue restaurant.

The ride, Mystic River Falls, officially opened on July 21, preceded in June by the restaurant, Rivertown Smokehouse BBQ, and a new Cinnamon Bread Bakery. But neither the party nor the 1880s theme park itself were quite what fans had anticipated going in to 2020.

"We were scheduled to open March 17," remembers Brad Thomas, the park's president. "Just a few days before opening, we made the decision to delay our opening. At that point, we did not quite know if the delay would be days, weeks or months.

"We knew we wanted to do everything possible to protect our guests and our employees," he continues. "As we watched and learned more and more about the virus, we opened June 13 with numerous new operating procedures and greatly decreased our maximum attendance levels."

"It was a team effort on behalf of strongly dedicated individuals from both our corporate headquarters and our members of Silver Dollar City leadership, who researched and studied the situation from all angles," says park spokeswoman Lisa Rau. "We developed a plan to present the safest operations possible -- and equally as important, we stuck to those protocols we put into place. From planning through execution of the plans, committed people worked together, with the experience continuing to build our family culture, both internally and with many of our guests."

Among the changes to fight covid-19 were required reservations for both season pass holders and day-trip guests. Visitors -- and employees -- were checked for elevated temperatures as they entered the park. If a screening revealed a temperature of 100.4 or higher, that guest and anyone who traveled in the same car had the cost of admission refunded or was issued a raincheck for another day. There were sanitation stations; buffets became cafeteria-style eateries; and indoor shows -- like the holiday favorites "It's A Wonderful Life" and "A Dickens Christmas Carol" -- were put on hold until 2021.

Even without the fanfare, Mystic River Falls added a unique new thrill to Silver Dollar City. Announced in August 2019 and designed by the park in partnership with Swiss firm RES -- Ride Engineers Switzerland -- and Barr Engineering, the ride's claims to fame include being the "tallest drop on a water raft ride in the Western Hemisphere" and having a "one-of-a-kind rotating, four-platform, eight-story lift."

"With so much of what we do and how we operate different this season, it's really invigorating to sink our teeth into something this exciting -- to finally being able to say Mystic River Falls is open," Rau said in July. "My favorite part of developing this ride is the how history meets lore. Marvel Cave has a Mystic River inside its depths. As far back as 1893, scientists have tried to find the headwaters of this mysterious waterway, documenting it in a book from the 1890s-1940s. Even modern day scientists aren't sure where the waters travel. That truth, mixed with lore of adventurers seeking the headwaters, makes it all so 'Silver Dollar City.' And guess what? That 4-and-a-half story waterfall? Yes, riders find the headwaters!"

The ride and the area surrounding it were "a culmination of years of guest feedback," Thomas said then. "Mystic River Falls is packed with unique thrills that the family can enjoy together. The only place on the planet to experience this ride is right here at Silver Dollar City. Now add in the new Smokehouse, with 400 seats overlooking the banks of the roaring river, slow cooked meats, awesome sides and the unbelievable bread pudding made with our very own cinnamon bread! And finally, our new cinnamon bread bakery bakes hundreds of loaves of fresh bread throughout the day."

No one knows for sure what 2021 will bring, but Thomas promises "many of our our grand 60th anniversary plans will be forthcoming," and Rau adds: "We never stop looking ahead in how we can deliver great experiences at Silver Dollar City, and we ensure we listen to our guests about the kinds of engagement they are seeking. Stay tuned as there is more news on the horizon!"

Silver Dollar City plans to open March 20 for the 2021 season. Find out more at silverdollarcity.com.