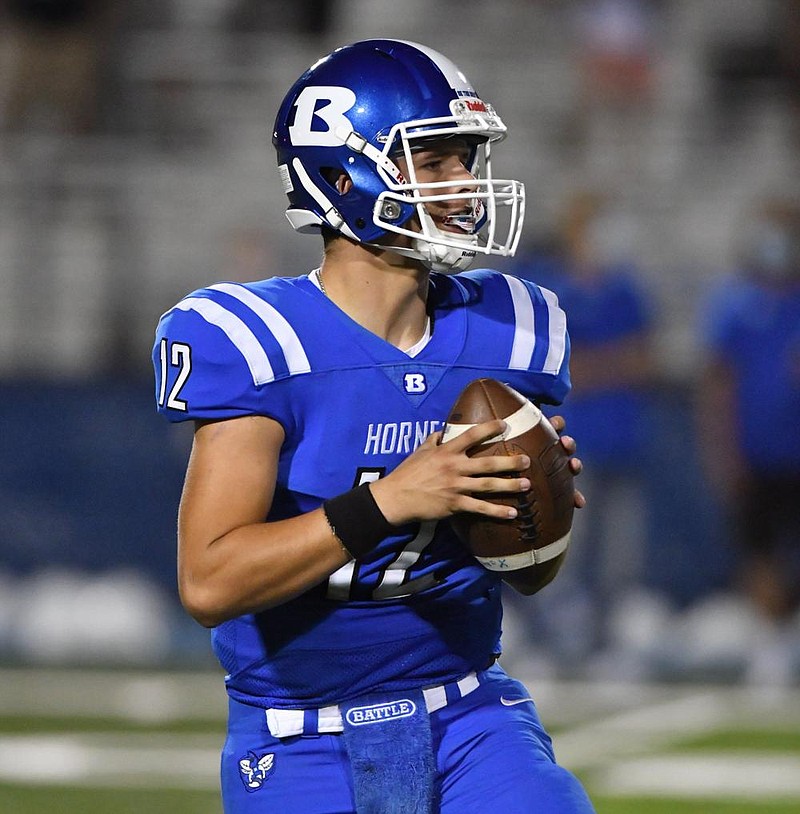 Bryant senior quarterback Austin Ledbetter passed for 41 touch- downs to lead the Hornets to their third consecutive Class 7A state championship. Ledbetter nished his career with a school-record 88 touchdown passes and did not lose a game in 26 starts his nal two seasons. (Special to the Democrat-Gazette/Jimmy Jones)

All Austin Ledbetter did as Bryant's quarterback was win.

The Bryant senior was 26-0 in two full two years as the Hornets' starter.

Ledbetter threw 41 touchdown passes for the 13-0 Hornets and is the 2020 Arkansas Democrat-Gazette All-Arkansas Preps Offensive Player of the Year.

He completed 173 of 269 passes for 3,086 yards with 41 touchdowns and 5 interceptions to help Bryant three-peat as Class 7A state champions and finish No. 1 in the Democrat-Gazette's Overall Top 10. He also had 183 yards and 2 touchdowns on 43 carries.

Ledbetter threw five touchdown passes in three separate games -- Oct. 30 at North Little Rock, the Class 7A quarterfinals against Springdale Har-Ber on Nov. 20, and in the Class 7A semifinals Nov. 27 against Conway.

James said Ledbetter' numbers, both for the 2020 season and his career, would have been even better had he played more in the second half. He did so just six times in his career.

"His numbers could have been astronomical," James said.

The numbers were good enough, as Ledbetter's output in 2020 cemented him as Bryant's best quarterback ever.

The three-time state champion signal-caller leaves as the school's all-time leader in passing yards (6,957) and touchdown passes (88). He also set the school's single-game passing record in 2020 with 534 yards in a 58-21 rout at North Little Rock on Oct. 30.

Ledbetter said the wins Bryant had on the field came because of how hard the program worked off of it.

"It's all about working in the summer and the spring, so we could make those Friday nights easier," he said.

When it came to his senior season, Ledbetter gave credit to his coaches for keeping him and his teammates motivated even though the coronavirus pandemic could have put a halt to the season.

"They gave us hope," he said. "If we didn't play, at least we wanted to put it all out there in practice."

Despite his football success, Ledbetter has signed a baseball scholarship with the University of Arkansas. He committed to the Razorbacks as a ninth-grader.

James said several Power 5 football schools missed out on Ledbetter, but he's excited about his quarterback's future on the diamond with Coach Dave Van Horn.

"He's got the best of both worlds," said James, noting Ledbetter's opportunity to play baseball for a nationally-prominent program and the education at Arkansas.

Don't count out football just yet for Ledbetter. He said while he's focused on baseball, there's a chance he may also play football for the Razorbacks.

Ultimately, being a Hog was a dream that has come true.

"I'm beyond excited," Ledbetter said. "I'm ready to go up there and play for Coach Van Horn right now."

Ledbetter's legacy is secure at Bryant. James said he is an inspiration for younger kids in the city.

"It sets the bar high," James said. "They're wanting to grow up to be Austin Ledbetter. But they're going to have to work hard and perform and have the work ethic that he has."

Ledbetter at a glance

HIGHLIGHTS Passed for 3,086 yards, 41 touchdowns and 5 interceptions. … Led Bryant to its third consecutive Class 7A state championship. … Went 26-0 in two full seasons as the Hornets’ starting quarterback. …. Will play baseball at the University of Arkansas.