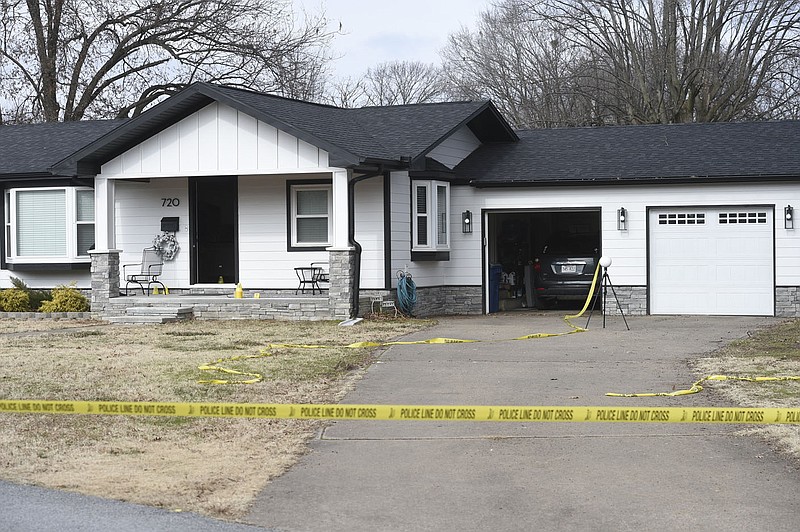 The site of an officer involved shooting is shown, Sunday, January 10, 2021 at the 720 NW 6th St. in Bentonville. Police officers shot and killed a man early Sunday morning during a domestic disturbance, according to a news release from the police department. Check out nwaonline.com/210111Daily/ for today's photo gallery. (NWA Democrat-Gazette/Charlie Kaijo)

BENTONVILLE -- Police officers shot and killed a man early Sunday morning during a domestic disturbance, according to a news release from the police department.

Officers went to 720 N.W. 6th St. just after 3:15 a.m. where a husband, wife, two children and the husband's parents were inside the house. The officers tried to talk with those inside, according to the release. Furniture barricaded the doors.

A little after 3:30 a.m., the husband opened the front door and "charged officers with a large kitchen type knife," according to the release.

The man's father was also taken to the hospital and treated for injuries inflicted by his son, according to the release.

No officers were injured during the shooting, according to the release.

Bob Bennett, who lives at 710 N.W. 6th St., said he was up oil painting about 2 a.m. and went to bed about 3:15 a.m. He said he was in bed for five minutes when he heard a noise like a fence falling or firecrackers going off.

"I didn't know what happened," he said. "I thought someone was breaking into the house."

Bennett said he saw an ambulance go by about 20 minutes later and he thought someone may have had a heart attack, but he was wondering about the noise he heard.

Bennett said he was stunned when he heard about the shooting hours later.

"I've live on this street since '84 and I would have never dreamed of something like this happening," he said.

"This street, you would not think ...." Bennett said, and paused. "You hear people say that all the time, but I never dreamed of that happening."

Bennett said he may have spoken a few times to the man who was killed.

He thinks the man lived in the neighborhood for four or five years.

The Arkansas State Police is handling the investigation.