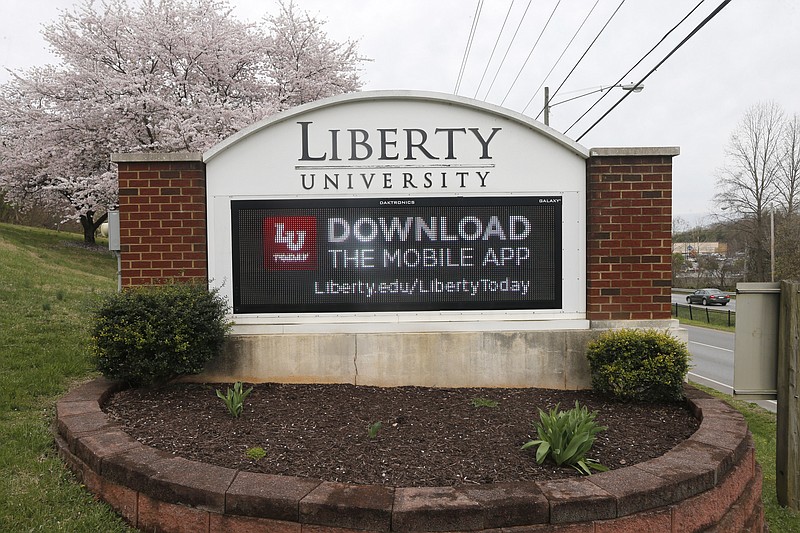 FILE-This Tuesday March 24, 2020 file photo shows s sign that marks an entrance to Liberty University as students were welcomed back to the campus during the coronavirus outbreak in Lynchburg, Va. Liberty University sued Virginia Gov. Ralph Northam on Friday, Jan. 8, 2021 accusing his administration of wrongfully denying financial aid to some of the evangelical school's online students. (AP Photo/Steve Helber,File)

At issue is a budget change Northam and the Democrat-controlled General Assembly implemented last year that made incoming students enrolled exclusively in online programs ineligible for the state's long-running Tuition Assistance Grant program for Virginia residents.

Exempted from the change were students who had to shift their studies online due to the coronavirus pandemic.

Students at Liberty, which has a large and lucrative online presence, had been the leading recipients of the grant for years, and the change became a sore spot for the university and its former president, Jerry Falwell Jr., who repeatedly lashed out at Northam.

The lawsuit alleges that the eligibility changes were designed specifically to harm Liberty, and "threaten to wreak severe economic and reputational harm" on the school.

It asks the court to stop the exclusion of online students from the grant program, saying it violates the Equal Protection Clause of the 14th Amendment "because no rational basis exists to distinguish between 'online' and 'place-based' education."

The lawsuit, filed in federal court in the Western District of Virginia, also names Peter Blake, director of the State Council of Higher Education for Virginia, as a defendant. The state agency manages the administration of the grant.

"Governor Northam has made it a top priority to expand access to affordable, high-quality education. We don't comment on pending litigation," Northam's spokeswoman, Alena Yarmosky, said in a statement.

A spokeswoman for the council, Laura Osberger, also said she could not comment.

The grant program created in 1972, which is not need-based, helps defray the cost of college for Virginia residents enrolled full time at participating private nonprofit institutions.

Yarmosky said in January, as the legislature was taking up Northam's budget proposal, that the program was particularly intended to address the "brick and mortar" costs associated with attending college, such as housing. Northam's proposal increased the grant amount for residential students.

"Online programs, by their very nature, do not incur the same myriad of brick and mortar costs," she said at the time.

Falwell, who stepped down from his role at Liberty in August after a series of personal scandals, frequently railed against the changes, including at a joint news conference with West Virginia Gov. Jim Justice where the two encouraged Virginia counties to secede and join their GOP-governed neighbor.

Later, Falwell pointed to the tuition assistance cuts as the justification for a tweet he posted invoking a blackface scandal that nearly forced Northam from office.

Facing a backlash for the tweet, which he eventually apologized for and deleted, Falwell said his reference to the scandal was made in defense of Liberty students, including minorities, who would be affected by the changes.

Falwell said his involvement in politics was in the spirit of Jesus Christ, "who was not silent about the establishment political folks of his era."

Liberty has since created its own aid program to replace the state money: David Corry, Liberty's general counsel, said the school awarded about $1.6 million to 552 students in the first semester of the 2020-2021 academic year.