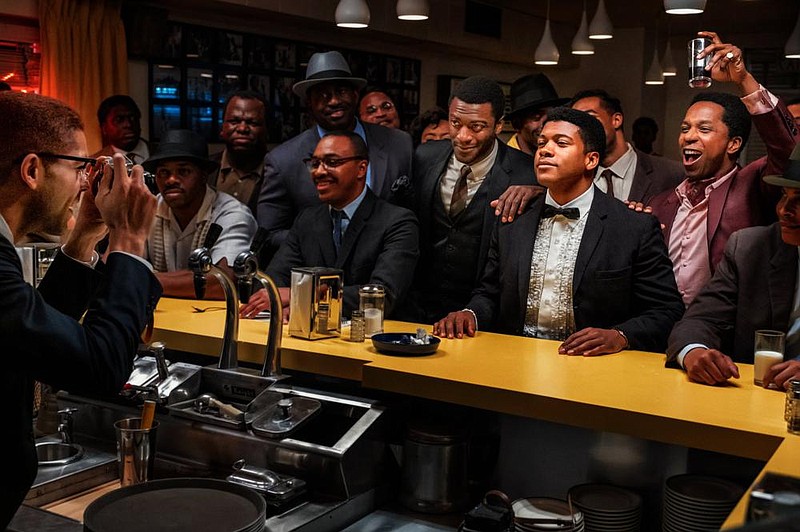 I guess you could form an argument that basing a film on a play would make the feature easier to put together, but that wouldn't be taking into account the tremendous differences between the mediums, their relative strengths and weaknesses, and the ways plays have a tendency to fall flat when presented on the big screen.

For her feature debut, the Oscar-winning actress Regina King has cinematically adapted "One Night in Miami" from the stage play by Kemp Powers about a fictionalized fateful night among four famous Black men in 1964. Those men, Malcolm X (Kingsley Ben-Adir), Jim Brown (Aldis Hodge), Sam Cooke (Leslie Odom Jr.), and Cassius Clay (Eli Goree), are all in town ostensibly to celebrate Clay's beatdown of Sonny Liston to become the heavyweight champion of the world at the tender age of 22.

Despite the grandeur of the moment, the film puts them all together in Malcolm X's modest hotel room, watched over by Nation of Islam security men, to spend a night, essentially, debating the merits of what they bring to the struggle for Black equality and economic emancipation, and arguing back and forth about their distinct positions. The argument eventually settles primarily between Cooke, seen by many as a capitalist opportunist, making his money while doing little for his community, and the hard-driven Malcolm, who sees fame and recognition as a weapon to use against the racist controlling interests all around them.

Yes, it is a film about a group of men sitting around, and doing little more than conversing together, with occasional forays out into the night for ice cream (Malcolm), and more hedonistic pursuits (Brown), but under the seeming plotlessness, there are many, vastly more engaging elements brought to bear.

Here is precisely where many play adaptations falter, without the dramatic friction of a live performance to power the emotional core, such static conventions generally fall flat on the screen, but King's virtuoso acting instincts serve her able cast well, and her work with DP Tami Reiker allows the film to flow, seemingly organically between its few location movements. Working from a dialectic script by Powers, the celebrated figures feel three dimensional, which gives their more pedantic diatribes (Malcolm), and pithy rebuttals (Cooke) enough weight to avoid sounding overly constructed.

If the set-up can feel a bit like "Four Characters in Search of a Didaticism," it does make sense, dramatically and politically, for Kemp to have conceived such a shuttered evening between these figures: at one point Clay expounds as to how the four of them will always remain friends, because they are among the few who can possibly understand what it's like to be "young, Black, famous, righteous, and unapologetic."

It is no small trick to bring a public figure to life by an actor: mine the role too much for recognizable physical characteristics, and you run the risk of empty mimicry, like Rich Little performing Richard Nixon; but to ignore such things entirely, you fail to convey enough of the person such that it feels entirely interpretive (and thus, what's the point?). It's easily the trickiest aspect of such a film, but King has cannily cast her debut with actors that are able to tie in the public personas of their famous characters, but only to show the facade they are happy to move past in their private company together.

The cast as a whole works wonders on the material, granting a needed organic vibe to their nonfiction characters, echoing the essences without tipping into caricature, but no more so than Ben-Adir's Malcolm, easily the most thorny figure to get right. Through the actor's efforts, we get a glimpse into the layers of Malcolm's psyche -- as much as he enjoys spending time with his friends, he's desperately working on an agenda with Clay, convincing him to publicly embrace Islam, as a means of keeping his own light shining bright after his falling out with the Nation -- and get a sense of the competing driving forces within him. These multitudes power the film's emotional climax, a fiery showdown between Malcolm and Cooke, that results in both men coming away singed. (Cooke, incensed at Malcolm's calling him out, notes his friend's own agenda with Clay, "It takes a hustler to see a hustler," he spits.)

It's not hard to imagine an actor/director using such an actorly showcase to highlight their skills behind the camera, but King's film works in ways more subtly convincing than simply cuing a talented cast to let it rip. It's a strong debut for her, and the film's complex ruminations on the responsibility of successful Black people toward their community as a means of bringing attention to the country's oppression couldn't be more on point. The set-up might reek of Grand Contrivance, but in King's talented hands, it becomes a fascinating and illuminating examination of racial politics and the bondage of fame.

‘One Night in Miami’