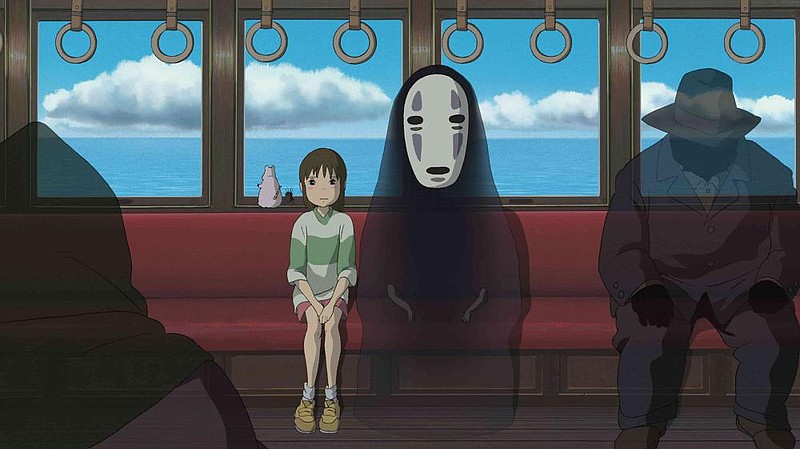 The 10-year-old Chihiro Ogino and the spectral presence known as “No Face” move between reality and the invisible world in Hayao Miyazaki’s Oscar-winning “Spirited Away.”

So when I saw Hayao Miyazaki turned 80 this week, I figured it was a wonderful opportunity to celebrate the legacy of one of the world's greatest animators, up there with Walt Disney and Osamu Tezuka.

How many people intend to still be working by the time they're 80? Not many. My dream when I get to retirement age is to buy a small newspaper and run it until I'm simply unable. As for Miyazaki, he's 80 and still working. The man has come out of retirement to keep making cartoons, and I'm sure his millions of fans across the globe are grateful.

Animation is hard work, y'all. And Japan's animators, in particular, have good odds of being overworked and significantly underpaid.

I took an advanced animation course in college, using what was, at the time, Macromedia Flash. Then it got purchased by Adobe, and I have no clue what it's called now. It was a summer course, two weeks of working on my own cartoon, each day from 9 a.m. to 3 p.m. Then I'd go home and work on it until about midnight. It didn't look great (which is why I quickly figured out I'm no artist), but it taught me how intense it is to draw the same picture slightly differently hundreds, if not thousands of times.

Even with digital tricks like motion tweens and other tools available to animators today, the field is brutal. So for Miyazaki to have been at this for almost 60 years, and still want to continue, shows a pure passion for art. His legacy deserves to be honored for many years to come.

Miyazaki worked his way up through the ranks, starting in 1963 as an in-between artist (the folks who draw frames between images). I've got a buddy who does that down in Atlanta. Let me tell you, it's a work of passion.

The artist eventually directed (or co-directed) several episodes of a famous anime's debut, "Lupin the 3rd, Part I." And it's actually funny if you go back and watch some episodes of this anime, you'll find similar designs that he would later re-use in his movies. There's an episode of "Lupin the 3rd" from 1980 that featured some robots. I used to have the episode on VHS. Imagine my surprise when those robots showed up in Miyazaki's later films, "Castle in the Sky" and "Nausicaä of the Valley of the Wind."

"Lupin the 3rd" is a huge franchise that has spawned dozens of movies, theatrical and television specials, as well as several television series. I'm a big fan, and it's remarkable that that's where Miyazaki got his start.

And, speaking of reusing character designs, the princess from "Castle of Cagliostro" -- Lady Clarisse -- does look suspiciously like Nausicaä from "Nausicaä of the Valley of the Wind." I'm not complaining.

Miyazaki has drawn manga (Japanese comics), he has animated television series, directed movies, and even in "retirement," he continues to work.

Most of the director's international fame comes from Studio Ghibli, which he co-founded in the 1980s with Isao Takahata ("Grave of the Fireflies").

Miyazaki is well-known for his movies, and even if you've never heard his name, you've probably seen at least one of his films. For a while, Disney was handling Ghibli's releases in the United States. And even if executives at the House of Mouse didn't always know how to market Miyazaki's films or think Americans would understand them well, Miyazaki's movies have a cult following.

Perhaps the most famous hit from Miyazaki is his Academy Award-winning film, "Spirited Away." I can remember when my local video rental store back in the big city of Dover, Arkansas, was making the transition to DVD. It was getting rid of VHS tapes, and somehow, this little shop had a copy of "Spirited Away." You better believe I snatched it up for something like 50 cents.

The movie is sometimes compared to "Alice in Wonderland," and I can see why. It follows a shy girl named Chihiro. After her family accidentally enters the world of spirits, she finds her parents turned into pigs by a witch. She ends up working at a bathhouse for spirits while trying to find a way to return them to normal and get back to the human world.

"Spirited Away" is damn near perfect, and it's also the second highest-grossing film in Japan, even beating out "Titanic" and "Frozen."

Miyazaki has this way of weaving certain themes into his movies. Typically his films will include anti-war messages and themes like pro-environmentalism, childlike innocence and female empowerment.

"Nausicaä of the Valley of the Wind" is my all-time favorite story by Miyazaki. It features a strong female lead in Nausicaä, in a time when you didn't see too many women leading their own action-packed stories. But Nausicaä is an amazing hero, having to find a way to repel invaders from her kingdom, while also stopping a rampaging swarm of giant insects from destroying her home.

It's set 1,000 years after the collapse of society due to an apocalyptic war. A toxic jungle is slowly covering the planet, and most of mankind has died. Only tiny pockets of kingdoms remain. And in "Nausicaä of the Valley of the Wind" you find those same anti-war, pro-environmentalism themes.

They also show up in a more widely known movie of Miyazaki's "Howl's Moving Castle." But you can find those same themes in "Castle in the Sky," "Princess Mononoke," "The Wind Rises" and more.

Each one of Miyazaki's movies is a gateway into self-contained magical stories. Some leave me wanting a little more. Others, I'm completely satisfied with by the time the credits roll.

I can't claim to love every Miyazaki film. I'm not a big fan of "Ponyo," and I despise "The Wind Rises." But I can't call either of those movies "bad" by any means. They're just as artistic and beautifully animated as his other movies.

Looking back across nearly 60 years of creative history, though, I marvel at everything Miyazaki has accomplished. And I look forward to what he has yet accomplish. Even now as I type this, the workaholic is slaving away on "How Do You Live?" And while it might be another year or two before it's finished (the man is 80, so he's allowed a bit of grace), I'm still excited about the project.

Miyazaki's son, Gorô, is becoming a talented director in his own right. While his debut film, "Tales From Earthsea" wasn't anything to write home about, "From up on Poppy Hill" was much better. I had a great time watching it.

To Gorô's credit, the "Earthsea" series by Ursula K. Le Guin is a monster of a story to try and adapt. They're my favorite fantasy series of all time, but even I can admit they'd be next to impossible to translate well to a single movie.

Gorô has a new movie that'll be released in America soon, called "Earwig and the Witch." It's Studio Ghibli's first full-3D CG animated movie, and I've been informed I should expect a review copy next week. So another Miyazaki adventure awaits me soon, and I'll have a review here after I watch it.

At 80, I hope Miyazaki is wearing a mask wherever he goes during this pandemic. He's a treasure equal in stature to our own Walt Disney, and if you haven't seen any of his movies, you can find them on HBO Max.

Stay healthy, Miyazaki. Your fans want you to stick around for a long time to come.