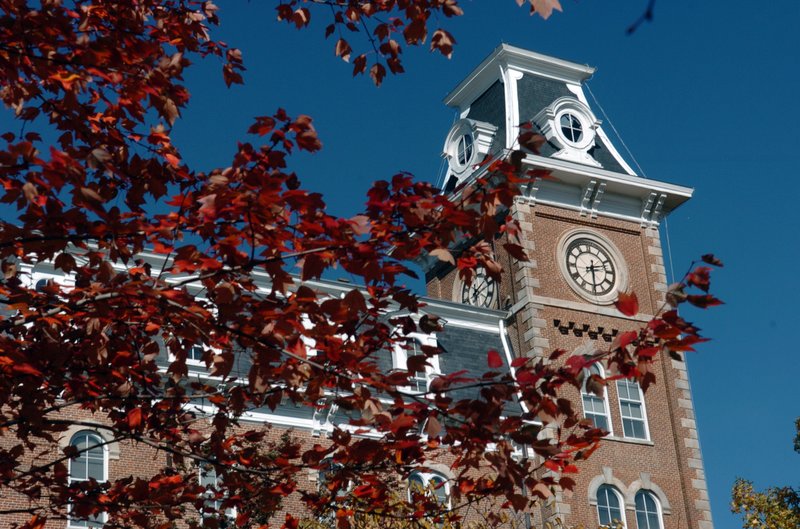 FAYETTEVILLE -- Women made up 70% of a surge of covid-19 cases late last summer at the University of Arkansas, Fayetteville, and an analysis found links to fraternity and sorority activities, according to the Centers for Disease Control and Prevention.

A CDC study examined fraternal organizations and concluded that "more virtual activities, including those related to fraternity and sorority rush week, might help minimize the risk for transmission on university and college campuses."

The findings, published as part of the CDC's Morbidity and Mortality Weekly Report dated today, include that a rapid rise in cases at UA from Aug. 22 through Sept. 5 "was likely facilitated by on- and off-campus congregate living settings and activities."

UA officials at the time emphasized changes because of the pandemic, with many recruitment events held virtually and a campuswide face-covering directive and social distancing in place for any in-person events.

More than 1,533 students signed up for sorority recruitment, the university announced, even as the traditional Bid Day took place without parents and "on a much smaller scale" compared with the gatherings of past years, Parice Bowser, UA's Greek Life director, said in August.

The CDC report did not identify UA by name, referring to "university A" in Arkansas. But no other university in the state approached having that number of covid-19 cases during those dates at the start of the fall semester, according to previously published state Department of Health data.

The heart of the study involved using a technique known as network analysis to examine links between cases of covid-19.

Study authors detected 54 "transmission-related" gatherings after conducting interviews with those infected. The total included 27 gatherings with at least five cases of covid-19, and researchers also noted that as many as 44 cases could be linked to a gathering.

Out of the 54 gatherings, 49 "were linked by participation in fraternity and sorority activities," the report states.

Bowser, in an email Thursday, said she was not familiar with the study.

[Interactive tables not showing up above? Click here to see them: arkansasonline.com/schools]

"We will continue to reinforce and follow the state directives and safety guidelines we have in place to keep our students safe," Bowser said. A campus spokesman, Mark Rushing, said the study was not a UA-affiliated research project.

"I believe most students on our campus made a concerted effort to adhere to the COVID-19 safety precautions during the fall semester, but of course we must stay vigilant as we begin the spring semester next week," Rushing said. "We continually assess new information and findings about COVID-19 and public health, and make adjustments to our plans and practices, in order to support the health and well-being of our entire community."

From Sept. 1-5 -- near a peak of covid-19 cases at UA -- three fraternities and four sororities received letters from the university informing them that five or more members had tested positive for the virus, the Democrat-Gazette previously reported.

The researchers also remarked on the likelihood of classroom transmission among the infections.

"Most patients reported virtual instruction only, which indicates transmission likely occurred primarily outside the classroom," the report states. This "is supported by the very small proportion of cases among faculty and staff members," which made up 0.5% of the covid-19 cases under study, the report stated.

The eight study authors included scientists with the state Department of Health and the University of Arkansas for Medical Sciences, and the report listed Health Department researcher Kristyn E. Vang as the corresponding author for the research.

To gather data for the study, nurses with the state Department of Health used a standardized questionnaire to interview persons at UA with covid-19.

Those testing positive were asked about community- and school-related activities during the 14 days preceding the onset of their illness, or, for asymptomatic cases, the date of testing. Included in the network analysis were persons either living on campus, taking part in fraternity or sorority events, or living off-campus with someone involved in such activities.

Researchers used this data and a visualization tool known as MicrobeTrace to "describe the full network of persons with COVID-19 and identify potential transmission-related gatherings," which were defined as gatherings "in which multiple cases are identified and epidemiologically linked."

The study authors noted that while classes began Aug. 24 at the university, students may have participated in fraternity or sorority events before as well as during the school year.

The report stated that while women represented about 54% of the university's student body in 2020, they accounted for 70% of the cases examined, with linked social gatherings perhaps an explanation for the disparity.

"Among linked gatherings, women accounted for 86% of cases, a finding that could reflect involvement in gender-specific activities, including sorority rush week, which held an in-person outdoor bid day event and occurred before fraternity rush week, which was both held later and virtually," the report states.

Study limitations included a potentially biased sample, as the data was gathered during mass testing events, and also the lack of information gathered about adherence to social distancing and the wearing of face coverings, the authors noted.

Top UA officials had urged students to follow pandemic safety measures, threatening disciplinary action for students not doing so even off campus. In September, UA also temporarily suspended events for more than two weeks, though this did not affect classes or Razorback athletics. Chancellor Joe Steinmetz at one point said it was believed that off-campus gatherings were causing the majority of covid-19 cases.

"Because of the potential for rapid transmission of SARS-CoV-2 in on- and off-campus university settings, student organizations could help ensure compliance with CDC-recommended COVID-19 mitigation measures, such as limiting the size of social gatherings, adhering to social distancing recommendations, requiring mask use, improving hand hygiene, and increasing testing," the report states.

Danyelle McNeill, a state Department of Health spokeswoman, in an email described the study's conclusions as "a broad takeaway for states across the country."

Elsewhere in Arkansas, a University of Central Arkansas spokeswoman, Amanda Hoelzeman, said she did not have data available about any connection between fraternal organization events and covid-19.

Hoelzeman said fraternities and sororities at UCA are required to include a covid-19 safety plan when registering events.

"If a student group is found to violate our policies for COVID-19 mitigation, they are reported to the Dean of Students for investigation," Hoelzeman said in an email.