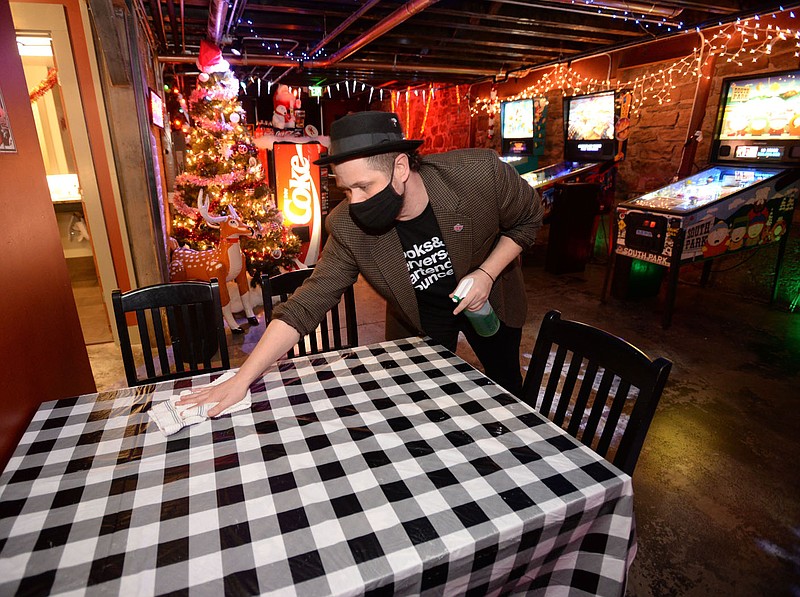 Bo Counts, owner of Pinpoint, wipes down tables with disinfectant Thursday as he and staff members prepare to open at the bar on Block Avenue in Fayetteville. The state's 11 p.m. curfew on serving alcohol has been extended to Feb. 3, and bar owners in Fayetteville filed a lawsuit to get the curfew lifted. Visit nwaonline.com/210108Daily/ for today's photo gallery. (NWA Democrat-Gazette/Andy Shupe)

FAYETTEVILLE -- More than 20 bar owners are challenging a state curfew prohibiting serving alcohol after 11 p.m., saying it's killing their businesses.

The lawsuit, filed Thursday in Pulaski County Circuit Court, seeks an injunction to prevent further enforcement of the curfew, which was implemented Nov. 20 as a measure to stem the spread of the coronavirus. The lawsuit names Gov. Asa Hutchinson; Doralee Chandler, director of the state Alcohol Beverage Control Commission and Dr. Jose Romero, secretary of the state Department of Health.

Bo Counts, owner of Pinpoint on Block Avenue, which joined the lawsuit, said the curfew is the equivalent of forcing restaurants to close during lunch and dinner time.

Covid mandates were already inequitably impacting bars before the curfew was instated, Counts said. Most bars are small and don't get anywhere close to achieving 66% capacity because of spacing requirements, he said.

Agents with Alcoholic Beverage Control frequently inspect bars and issue citations or warnings for customers violating protocols while no such enforcement happens at any other kind of business, except restaurants, Counts said. The high cost of liquor permits and taxes related to alcohol also put bars at an economic disadvantage, he said.

"To add insult to injury, now we have to close during our peak hours," Counts said. "How do you expect us to survive?"

In a statement regarding the economic struggle bars and restaurants in the state are facing, Hutchinson said he has opposed suggestions for further restrictions, as some other states have done.

"Our hospitality industry has been hit hard and there have been grant programs available to them that grocery stores and other businesses cannot access," he said. "In terms of future economic relief, it is too early to tell, but if funding is available then I would support additional help."

Hutchinson was referring to two grant programs, according to a spokeswoman. The Business Interruption Grant was open to hospitality and service businesses that could demonstrate they were harmed by pandemic-related restrictions. The $50 million used for the program from the federal Coronavirus Aid, Relief and Economic Security Act was distributed by the end of last month.

Hutchinson has also extended the state's Ready for Business grant program for businesses to have expenses reimbursed from Dec. 30 to Sept. 30.

The lawsuit claims bars are being unfairly targeted compared to other types of businesses.

Bars, according to data compiled by the state on the number of active covid-19 cases by associated activity, had the lowest number of cases while public schools had the most. In between were businesses and entities such as day cares, barber shops, gyms, restaurants, churches, colleges and retail stores.

Bars are the only businesses in the group that are regulated, according to the lawsuit, which was filed by Gary Barrett, a Little Rock lawyer. The state curfew is set to remain in effect until Feb. 3. The Department of Health and Alcohol Beverage Control are authorized to fine bars that don't comply and citations have been issued.

"The supermajority of a bar's business is between 10:30 p.m. and 1:45 a.m. and the operation during these hours is how a bar business can survive," according to the lawsuit. "There is no factual basis to limit the closing hours of the bars to 11 p.m."

The lawsuit makes claims for Constitutional violations of due process and unlawful takings.

"The ability to sell alcohol pursuant to a license issued by the Alcohol Beverage Control Board is a property right that must be afforded due process," according to the lawsuit. "The (state's) action of taking away the legal right to sell alcohol until 2 a.m., without a hearing or factual investigation, is a violation of the petitioner's due process."

The takings argument is based on the idea that private property can't be taken by the government without just compensation. The lawsuit contends the state, by the curfew, has seized the bar and restaurant owners' property by forcing limitations on their businesses without compensating them.

The curfew, the lawsuit argues, has rendered the owner's property useless after 11 p.m.

The lawsuit contends the bars and restaurants can conduct business in accordance with Centers for Disease Control guidelines between 11 p.m. and 2 a.m., just like businesses that are allowed to operate during those hours.

An immediate hearing is requested to prevent the bars from going out of business.