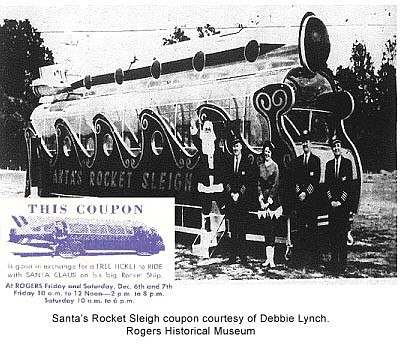 As is typical of the space race, by 1964 Santa had the brand new upgraded Rocket Sleigh pictured in this photograph from the Rogers Democrat Dec. 2, 1964. (Courtesy of the Rogers Historical Museum)

Editor's Note: As the new year begins, historian James Hales wanted to take one more nostalgic look back at holidays of a simpler kind. As he says, "Today, most of us are blessed to have so much, but it is good to remember the Christmases in the past when small things in life were so very appreciated."

I didn't grow up in Rogers, but outside of a small town that was similar. Even though we were dirt poor, we always had a tree and presents. One of my favorite Christmas memories was when I was about 6 -- 1952 -- and we only had one present each under the tree with an orange or apple in our stocking (a real treat). A star cut out of cardboard and wrapped in foil topped the tree with a few round glass ornaments and foil icicles. Needless to say, I was so excited that I spent a sleepless night waiting for my parents to awaken so we could open our presents on Christmas morning. On Christmas Day, we always attended church, but it was hard for a young boy to pay attention to the service with new treasures waiting at home. Later, when I was a teenager and worked at Sterling's Dime Store, I used my salary to buy a pair of hideous table lamps for my mother for about $2 each. She was shocked, but hid it well and pretended to like them. Many years later, I realized how ugly and tacky they were.

Santa originally traveled in a sleigh pulled by his reindeer, but as time progressed, he traveled by bus, train, and even a space ship. Here is a story from the Rogers Historical Museum:

By 1962 the world was in a space frenzy as the United States and the Soviet Union entered the race for the moon. It seemed that everyone was taking part in the space-race, even Santa Claus was trading in his reindeer for rockets.

During the 1960s, Santa visited Rogers several times in his "Super Rocket." The Progressive Merchants Association funded Santa's visit, and with a free coupon from one of the participating businesses, children could board Santa's space-age sleigh and ride around Frisco Park The original super rocket had seating for 65 and a speaker system to listen to Santa.

To find out about Christmas in Rogers, I asked for help from folks who grew up here. Following are some of their most joyous memories:

Sandra Balch Shingleur: "Whenever I think of Christmas, I think of downtown Rogers in the '60s and '70s. It started for us after Thanksgiving lunch. That's when my dad (Bob Balch, manager of Hunt's Department Store) and brother (Gary Balch) would hang the Christmas decorations downtown -- the bells and the lights between First and Second streets. The Christmas season had begun. Next came Santa in the small middle window of our store. He waved to everyone as they passed by. Then school would be let out for Christmas break, and I got to spend every day at the store wrapping presents or going to Rose Drug to get my dad another cup of coffee. I often made a stop at Tom and Jerry's to check out the shoes. On Christmas Eve, we would stay until it was time to go to church for the candlelight service. There was always someone who needed a gift at the last minute. I see us closing the doors to the store, there were times it was snowing, and looking down Walnut Street all aglow with the colored lights. No cars. Just peace and quiet. It was magical."

Susan Cauldwell: "Russell's dime store, about 1960; we did all of our Christmas shopping on Christmas Eve there as kids. It was a tradition to do it on Christmas Eve. Imagine that today. No Black Friday. I can vividly remember the layout of the bins and the candy case. The lamp posts downtown were beautiful, and Christmas lights were strung over the streets. But the best part for me was seeing the Reagan sisters' gigantic Christmas tree in their home. They opened up their home to anyone to see it and often served hot chocolate. Maybe it's because I was small, but I recall that tree being absolutely enormous, and it had literally hundreds of ornaments."

Karen Russell Burks: "One of the best memories of Christmas was about 1956 when Sam McClain, the manager of Southwestern Bell in Rogers, gave my brother, Carl, two real, working telephones. They had a long wire between them, and we could talk back and forth. That Christmas, we decided to put one phone in Dad's office and run the wire down to the front door on Walnut Street. It was Carl's job to sit up in the office and be Santa on the phone. Mom and Dad dressed me up like an old-time cigarette girl. My tray held all kinds of candy to give away to the children that wanted to call Santa at the North Pole and tell him what they wanted for Christmas. We had a ball with this. Carl made his voice sound like the jolly old elf and could even tell someone that he liked their shirt or sweater, because he could see them, but they never thought to look up in the office and if they did, they just saw a teenager on the phone."

Joe Don Dickhut: "Don Sutterfield at the Dixieland Mall was the best Santa ever! I had no idea who he was until years later when he finally revealed it to me when I was a school bus driver."

Fredia Wright: "In the 1950s and 1960s, we did our Christmas shopping at Sterlings Five & Dime. I remember the big clear bottles of bubble bath; they had a big artificial flower in them. Not too expensive; Mom got one every year. I miss Sterlings ... My grandma loved the what-nots, the pretty dishes. I got a green chicken candy dish for Christmas one year. On my 12th or 13th birthday, I got my first real bike that was all mine, and it was a 26-inch Western Flyer from Western Auto. When my dad worked at Daisy BB, for Christmas, all kids of employees would get to go to the old Victory Theater and watch cartoons with snacks, a big bag of candy and a nice gift depending your age. It was so much fun. I sure miss those days."

Debi Anderson: "In the 1960s, everyone waited for the moving Santa to go up in the hardware store (113 W. Walnut. I think this was the same mechanical Santa that was in Hunt's Department Store in earlier years.) Upstairs was where the toys were; you would have thought it was Macy's. I do remember that I thought that downtown Rogers seemed magical to me at Christmas in the '60s. Pouring over the items at the Sterling Store and Russell's Dime Store to find the right gift with that quarter held tightly in our hand. And the wonderful trip around town in the Santa Bus."

John Sampier: "I was lucky and envied as my mom was the Rogers Hardware toy lady for many years. At Christmas I was hired to wrap packages, including ones in layaway. There was a full size mechanical Santa in the window. Yes, downtown Rogers was magical."

Lynn Richards-Shatswell: "I don't remember how old I was, but I remember the Santa Bus, and I was in total awe. Riding that bus with Santa was one of the fondest memories I have of Christmas."

Tom Hughes: "I recall that Santa boarded the train in Avoca on his way to Rogers (about 1940). There was a metal-working shop on First Street that set up an elaborate miniature city in their window each Christmas."

Kathryn Fairchild: "One year Cass Hough (the president of Daisy) sent a large box of one of every gun Daisy made to my parents for all of us kids (five at that time) as a Christmas present. Mom immediately enrolled us in gun safety classes -- can't imagine why! Haha! One of the best Christmas presents I can remember. None of us worked at Daisy -- just good friends."

Charlene Hughes Hagan: "I loved to go to Rogers Hardware and check out the new toys. You had to climb old wooden stairs to get to the second floor. This was in the 1950s. When I got older, I liked to shop at Hunt's and McDonald's."

Joyce Eaton: "I remember going out in the woods and finding our Christmas tree and bringing it home to decorate. Don't know whose woods or where, but it was a favorite part of Christmas."

It is easy to see why so many had great memories of growing up in this wonderful town.

Santa arrived in Rogers on the Frisco train in the 1940s. Almost everyone in Rogers turned out for this exciting event. (Photo by Sam Wood courtesy of the Rogers Historical Museum)

James F. Hales is an author and local historian. His column appears monthly. Email him at [email protected]