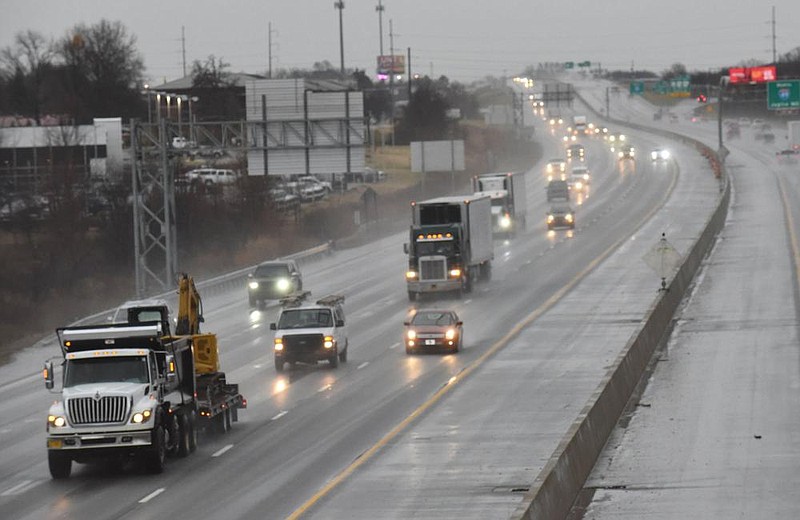 Vehicles with headlights on move Wednesday Jan. 6 2021 along Interestate 49 in Rogers during a foggy, drizzly morning. State law requires that motorists turn on headlights when windshield wipers are in use. Go to nwaonline.com/210107Daily/ to see more photos. (NWA Democrat-Gazette/Flip Putthoff)

Some Arkansans will wake up to snow on the ground this morning, according to the National Weather Service in North Little Rock, but it won't stay around for long.

"Widespread rain with mountain snow is expected Wednesday night through Thursday," according to the weather service. "A winter storm is likely in the Ozarks."

Parts of the Ozark Mountains and the highest elevations of the Ouachita Mountains could get 1-3 inches of snow, according to a Wednesday afternoon briefing from the weather service.

"In portions of Boone, Carroll, Madison, Newton and Searcy counties, 3 to 5 inches of snow are likely with localized amounts of 6+ inches for elevations above 2,000 feet," according to the briefing. "This event will also feature heavy rain. In southwest Arkansas, the forecast calls for 1 to 3 inches of rain. This area got several inches of rain to finish December, and the ground is saturated. Runoff could lead to spotty flash flooding."

Justin Condry, a meteorologist with the National Weather Service, said the snow will likely melt by 10 a.m. today as temperatures climb into the upper 30s in north Arkansas.

Condry said drivers should be careful, particularly in shady spots where snow may linger. He said melted snow could refreeze tonight and also be dangerous for drivers.

A winter storm warning was in effect from 6 p.m. Wednesday to 6 p.m. today.

"Expect impacts to travel, with hazardous road conditions likely, especially in the higher terrain," according to the weather service. "A winter storm warning for heavy snow means severe winter weather conditions are expected or occurring. Significant amounts of snow are forecast that will make travel dangerous. Only travel in an emergency. If you must travel, keep an extra flashlight, food and water in your vehicle in case of an emergency."

The high temperature was projected to be about 40 degrees today in Little Rock and Fayetteville with a 50% chance of rain, or rain and snow in Northwest Arkansas. New precipitation amounts are to be less than a 10th of an inch today in Fayetteville and possibly as much as half an inch in Little Rock, according to the weather service.