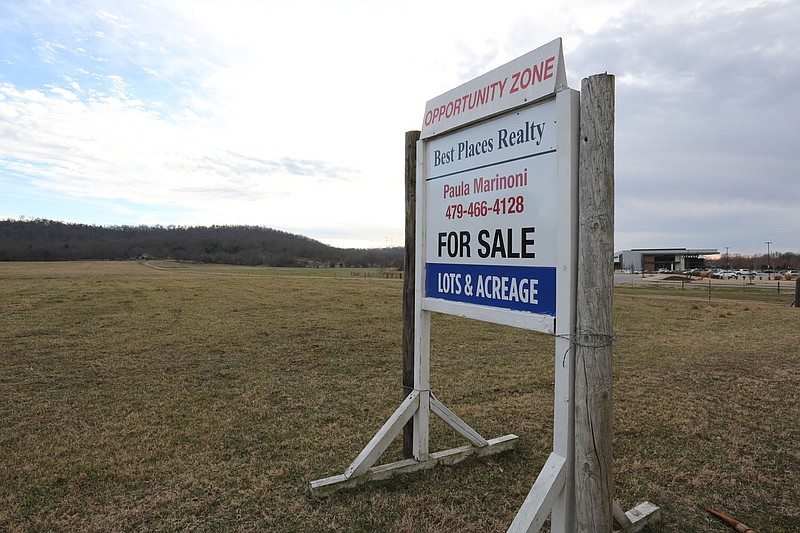 The Marinoni family farm is visible Dec. 28 near the intersection of Marinoni Drive and McMillan Drive off of Wedington Drive in Fayetteville. The City Council approved rezoning the more than 100-acre property by a 5-3 vote Tuesday. (File photo/NWA Democrat-Gazette/David Gottschalk)

FAYETTEVILLE -- The site of an old family farm will be opened for the property owner's vision of a live, work, shop and play area after a City Council vote Tuesday.

Council members voted 5-3 to rezone more than 100 acres southeast of Interstate 49 and Wedington Drive, the site of the Marinoni family farm. The land will change from a mostly single-family residential zone.

The rezoning will change about 85 acres to an urban thoroughfare zone and 23 acres to a community services zone. Both zoning types are intended to provide goods and services to nearby communities, according to city code. Both allow a mix of commercial and residential uses.

Normally, building height in the community services zone is limited to five stories. The urban thoroughfare zone can have buildings up to five stories near a property line and seven stories farther out.

Landowner Paula Marinoni told the council past contracts to develop the land fell through because of complications from city leaders, staff and residents, and most neighbors in opposition live far away from the site. The request follows the city's future plans and guidelines for development and gained the support of city planners, she said.

"Do you believe in what you're saying, or is it a laborious collection of buzz words?" Marinoni asked.

Rania Trulley, who lives southeast of the property, said most of the uses allowed under the zonings, such as multifamily units or potentially outdoor music, are incompatible with the area. Extending streets from the property would negatively impact the neighborhoods, she said.

"We live in a quiet, very peaceful neighborhood," Trulley said. "We have a great quality of life, and it is of utmost importance that our lovely space not be disrupted. I do not want the Marinoni property to become an area of dissonance."

Council members described different potential configurations for the rezoning but ultimately voted on the request as proposed. Sarah Bunch said she wished the request had more finesse. However, the topography of the land, especially the wooded area to the south, and the city's hillside and streamside regulations will likely dictate potential development, she said.

"If we keep saying we can't do this here or we can't do that there -- I'm torn on it. I love Fayetteville," Bunch said. "I'd like for all the trees to stay there and everything to just the stay the same. But we can't grow as a community."

In other business, the council tabled approving a contract for land to build a new parking deck downtown until Feb. 16. Mayor Lioneld Jordan said he wanted about a month to continue negotiation, and also wanted the city to hire an outside firm to review the contract.

With the proposed contract for the parking deck, the city would pay Greg House and Ted Belden $250,000 for land at the northwest corner of Dickson Street and West Avenue. Bank of Fayetteville would get $100,000.

In turn, the city would be able to build a five-story parking deck with 300 spaces to replace parking lost once the lot west of the Walton Arts Center becomes the civic plaza of the arts corridor.

Another building referred to as the Food Hall would be privately built at the northern end of the civic plaza.

Councilman Sloan Scroggin asked for the bedrock beneath the city's parking lot on School Avenue to be studied in case the deal falls through and the deck has to go there.

"I look forward to having the deck on the depot lot and the liner buildings and that's what I hope works out," he said. "I just want to make sure we have other options in place."

Also, proposed regulations on short-term rentals such as Airbnb were forwarded to the council's ordinance review committee. The committee will meet 5:30 p.m. Jan. 14 online on Zoom.

The council will hold a second meeting 5:30 p.m. Thursday to address new business not covered in Tuesday's meeting.