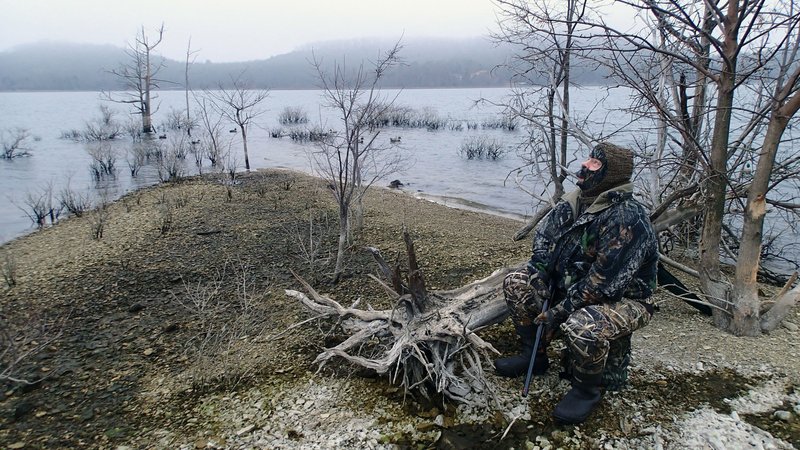 Alan Bland eyes a foggy sky for incoming mallards on Dec. 28 2019 during a duck hunt on Beaver Lake. High water and cold weather are the best conditions for waterfowl hunting at the reservoir. (NWA Democrat-Gazette/Flip Putthoff) - Photo by Flip Putthoff

Recent rainfall didn't do much for duck habitat in much of the state, according to Luke Naylor, Arkansas Game and Fish Commission waterfowl program coordinator.

"That rain system did not do what was predicted," he said. "There were predictions at one point for a pretty extensive, 4- to 6-inch rain band, and if you watched that thing, the storm kind of turned on its axis and everything shifted south of (Interstate) 40. I had expected the Arkansas River Valley, a lot of those agriculture fields around Ed Gordon (Point Remove WMA) and Petit Jean to get overbank flooding for the first time, but that didn't happen. They didn't get much, or at least not enough."

There wasn't enough rain in the Ozarks to raise the lower White River, and there isn't much rain in the forecast, Naylor added.

Along with the lack of available habitat is a delay in any major migration of ducks, particularly mallards. Anecdotal reports much further north of here say observers are just now seeing their expected influx of winter-migrating ducks in areas of eastern Nebraska. Hunting has ended in South Dakota, and it ends this week in Missouri's north zone. Duck counts in conservation areas in Bootheel region show less than 60,000 ducks, according to the Missouri Department of Conservation. Missouri's larger duck counts at the end of December came from conservation areas and national wildlife refuges in the middle and western portions of the state, with small numbers seen near the Mississippi River areas. Its statewide total as of Dec. 31 was 501,402 ducks, down about 200,000 from two weeks earlier and on par with the 20-year average of 495,951, but lower than the previous 5-year average of 674,512 ducks. Mallards in Missouri for the late December count were down 12% from the 20-year average and 35% below the previous five-year average.

Quite a bit of Arkansas hunter success hinges on the weather from the breeding grounds on down the flyways. The entire Mid-Continent covering the Central and Mississippi flyways has seen unusually higher temperatures for late fall/early winter.

As for duck sightings in state, the AGFC has an aerial survey team of biologists out around the state this week for the first of two scheduled January surveys. Anecdotally from what he's been told, Naylor said, "I've heard early reports from the aerial surveys that don't indicate a dramatic increase in ducks, for sure."

*Water levels listed in this report were taken Monday and do not reflect any rainfall Tuesday and Wednesday.

South Oliver GTR Mast production has been good. The area is 50% flooded with a current gauge reading of 1.75 foot. Water is rising in the GTR.

Thompson Tract GTR Mast production has been good. The area is 100% flooded with a current gauge reading of 2.1 feet.

Hunt Area Mast production is good. Water levels in the huntable areas are dependent on the St. Francis River. The water level at Oak Donnick is 214.60. The level for huntable timber is 212.

Unit B Excellent stand of millet and native vegetation. 100% flooded.

Habitat and water levels are normal on both Pierce and Dix creeks.

BERYL ANTHONY LOWER OUACHITA WMA The WMA has good hard mast production. The only water on the WMA currently is in the sloughs and in the oxbow lakes.

FREDDIE BLACK CHOCTAW ISLAND WMA DEER RESEARCH AREA Habitat conditions are good. There is variable flooding associated with the Mississippi River. Use extreme caution when boating on the river.

Galla Creek GTR Moderate stand of native vegetation and millet, including a mixture of barnyard grass and sprangle top. 100% flooded.

Slaty Crossing Moist-Soil Unit Due to ongoing waterfowl habitat enhancement projects, this unit did not grow a desirable native vegetation crop this year. Only about half of the unit produced a crop of millet, but the areas that did produce look amazing. 80% flooded.

Pullen Pond Due to ongoing waterfowl habitat enhancement projects, parts of the northeastern sections of this area are bare ground. Other parts of this area have spotted sections of great desirable native vegetation. The desirable native vegetation has started to become more and more prevalent with each year of ongoing management work. Water level 70%.