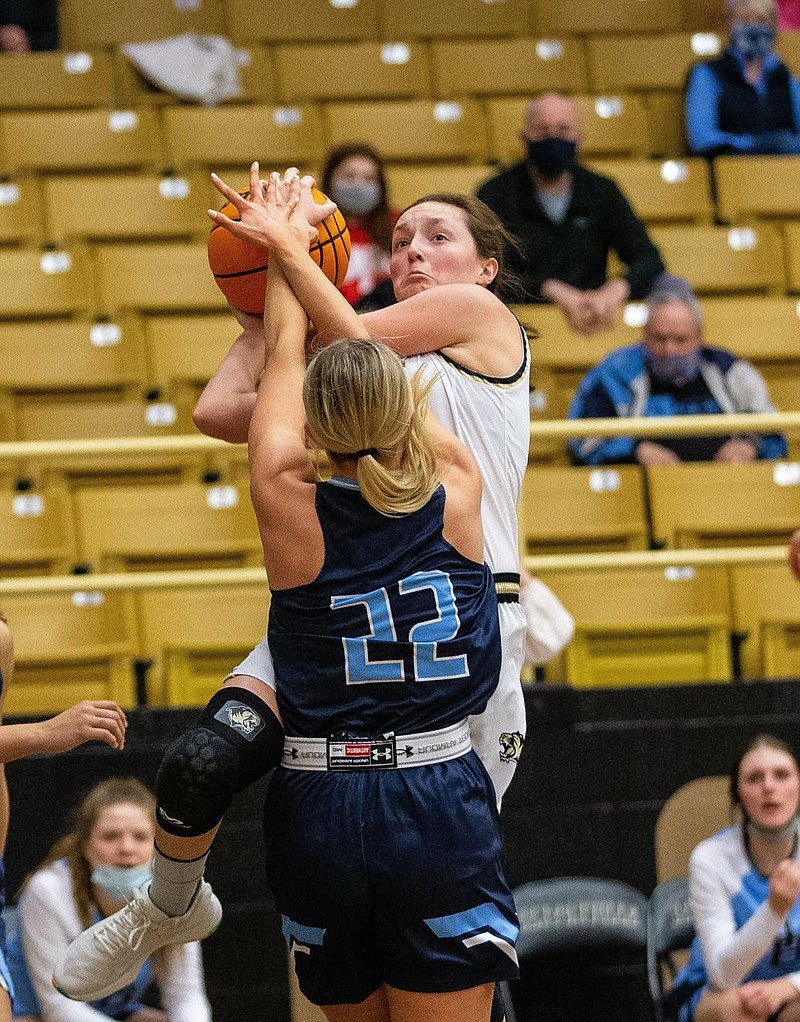 BENTONVILLE -- Even with Maryam Dauda in foul trouble Tuesday night, the Bentonville girls found a way to open 6A-West Conference play on the right foot.

The Lady Tigers picked up the needed offense from a variety of other players to run past Springdale Har-Ber 71-57 in Tiger Arena.

"They did a nice job of overcoming the adversity and the inconsistency," Bentonville Coach Tom Halbmaier said. "It was a good challenge for them, and I was proud of them for their level of effort and how they competed for four quarters.

"We had a bigger lead at the end of the third quarter than we did at halftime, so that shows the maturity of our team. Everybody seemed to step up and play within themselves during that time frame."

Bentonville had five players score points before the third quarter ended. Samantha Rhuda, who took Dauda's spot in the lineup, hit a bucket to put Bentonville's lead back into double digits. She added back-to-back putbacks to make it 54-36.

"They had some shooters step up and hit some shots," Har-Ber Coach Kimberly Jenkins said. "They also got some 50-50 balls that we couldn't seem to pick up and had some players step up when Maryam went out.

"They came down and hit a couple of threes, and we came down and was a little dead on offense. We didn't get any good looks to respond to that charge."

Har-Ber's only lead came when a bucket by Caylan Koons made it 5-4 with 6:11 left in the first quarter. The Lady Tigers scored 15 of the next 17 points and led 19-7 on Gracie Eaves' three-pointer. She hit another one to make it 22-9 at the end of the first quarter.

Nadia Akbar had 20 points to lead Bentonville, including a bucket and two free throws that gave the Lady Tigers a 63-44 cushion midway through the fourth quarter. Eaves was next with 14, followed by Dauda with 13 before she fouled out with 2:34 remaining. Jada Brown added 11.

McDaniel led Har-Ber with 20 points before she also fouled out late. Koons and Galatia Andrew each added 13 for the Lady Wildcats, who return to action Friday at home against Rogers Heritage.

Bentonville will travel to Fort Smith Southside for its next 6A-West game Friday night.