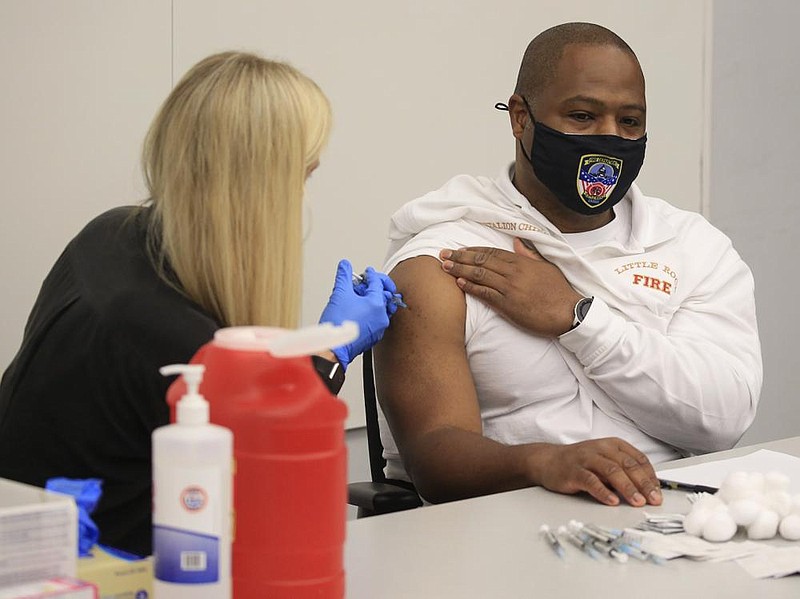 The initial covid-19 vaccinations for first responders in Little Rock were administered Tuesday morning to two longtime employees of the city's police and fire departments.

Gov. Asa Hutchinson's administration opted to move police and firefighters to the initial phase of the state's vaccine distribution plan, known as Phase 1A, alongside health care workers, and the residents and staff members of long-term-care facilities.

The push to inoculate first responders in Arkansas at the earliest opportunity marks a departure from federal guidance on how to distribute the limited doses of the covid-19 vaccines.

[Video not showing up above? Click here to watch » https://www.youtube.com/watch?v=lhAme4oJb3Q]

He said he believes the vaccine will provide a level of protection to "keep myself safe, keep my co-workers safe, my family safe, as well as the community that we serve."

Pope, 51, told reporters that he did research on the vaccine and concluded "it definitely couldn't hurt."

He said he believes officers should have been in the first group of inoculations regardless because of their close, hands-on interactions with the public.

With the time frame police have to work with, sometimes they do not have time to wear a mask or wear gloves, Pope said, "so I think this vaccine can help us be safer."

The patrolman has worked for the Police Department for 24 years.

Brittany Marsh, owner of Cornerstone Pharmacy at Rodney Parham, said her pharmacy is scheduled to vaccinate Fire Department employees in the first part of the week and later give injections to officials at the Police Department, 911 center and police headquarters.

She said the pharmacy plans to administer about 700 vaccines to first responders.

"We want everyone to get their vaccine. It's so important. It's important to health-care workers and first responders, as you're seeing," Marsh said. "We're having great turnouts. Very few reactions at all, if any."

During the governor's weekly covid-19 briefing Tuesday, Hutchinson said recommendations from the Centers for Disease Control and Prevention originally listed first responders as part of the first phase of vaccine distribution, a recommendation the CDC later changed, he said.

CDC recommendations say firefighters and police should receive the vaccine in the Phase 1B wave with other front-line essential workers in sectors such as education, food, and agriculture and manufacturing.

At the briefing, Department of Health Secretary Dr. Jose Romero said the addition of first responders to the first phase of vaccinations "fits Arkansas because we are a rural state."

Romero argued that police and firefighters in Arkansas often arrive at an accident first, unlike a metropolitan center where ambulance or rescue crews might arrive first.

Other Central Arkansas agencies will begin arranging vaccinations for their officers in coming weeks.

"Next week, officers will call and schedule their vaccines," Green said. "Then, they'll go in and get it. I think they have to be monitored for 15 minutes for any aftereffects. Then they can go back on duty or back home or wherever."

Pulaski County deputies may have to wait longer to be vaccinated, according to spokesman Lt. Robert Garrett.

"We have reached out to a few different local pharmacies to have our testing done," Garrett said. "Right now they're compiling the numbers, so we're hoping it will be in a couple of weeks."

"It's voluntary with our agency," Green said. "It's not mandatory by any means."

Information for this article was contributed by William Sanders of the Arkansas Democrat-Gazette.