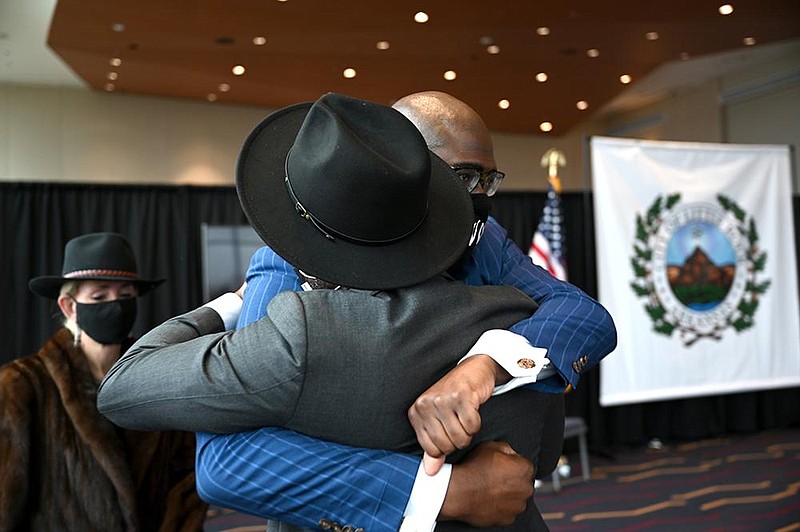 Little Rock Mayor Frank Scott Jr. on Friday presided over a swearing-in ceremony at the Robinson Center for three returning members of the Little Rock Board of Directors and the board's newest member, City Director Antwan Phillips.

Phillips, an attorney with the firm Wright Lindsey and Jennings, was elected in November to the at-large seat in Position 9 after he defeated six other candidates in the race. He replaces Gene Fortson, who had declined to run for another term.

In an introduction before Phillips took the oath of office, Scott called him "a dear friend -- one of my best friends."

"He is truly the embodiment of the city of Little Rock, and we are grateful for him and his [continued] years of service," Scott said.

The oath was administered by state District Judge Mark Leverett. Phillips was joined by his wife, Taneesha.

In brief remarks after he was sworn in, Phillips appeared to get choked up. "When my mom passed, she taught me to believe in better," Phillips recalled. "And each one of you are here because you believed in me."

He thanked his family, his law firm and his wife.

"To everyone watching, and the people who believe in better, whether you're in Singapore, South Africa, Sacramento, Baltimore, New York, Boston and to everyone in the city of Little Rock, thank you for giving me this opportunity to serve," Phillips said.

He said that "with recognition comes responsibility, and I accept the challenge to create a better Little Rock."

The incumbents on the 10-member city board sworn in for another term Friday were Joan Adcock, Dean Kumpuris and Capi Peck.

Adcock, an at-large director serving in Position 10, began her eighth term Friday. She is the longest-serving city director in Little Rock history and has served on the board since 1993.

The other returning at-large city director, Kumpuris of Position 8, was first appointed to the board in 1995 and has been reelected seven times, most recently in November. Little Rock City Clerk Susan Langley held the Bible as Kumpuris took the oath of office Friday.

Ward 4 City Director Peck was unopposed in her bid for a second term late last year. During the swearing-in ceremony, Peck placed her hand on a copy of the Torah as she was joined by her partner Brent Peterson, with whom she owns Trio's Restaurant in Little Rock.