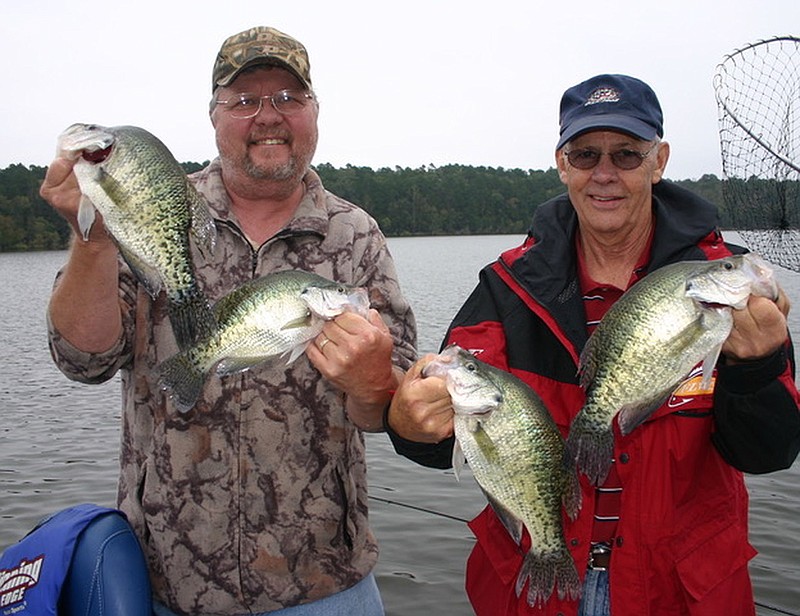 When you see boats while crossing Big Piney Creek on Interstate 40, you know crappie are biting.

It's one thing to see them on weekends, but when you see them on weekdays, during working hours, you know the bite is on. For the next couple of weeks, crappie will be aggressive and big.

Best of all, Lake Dardanelle is just one of many places to catch crappie this month in the Natural State. You don't need much. Just a boat and a long pole with a jig or minnow. Here's a sampler of places to visit.

Roughly following I-40, this 34,000-acre Arkansas River impoundment is somewhat overlooked for crappie fishing. Piney Bay, near the mouth of Big Piney Creek, is the most conspicuous hot spot because you can see it from the interstate, but you can catch crappie almost anywhere.

My last spring crappie trip to Lake Dardanelle was on a Tuesday with Alan Thomas. Big Piney Creek was our first stop. Most of the boats were at the mouth of the bay, a mile or so upriver from the creek's confluence with the Arkansas River. Thomas and I motored slowly upriver, looking for schools of baitfish on my electronic graph. Crappie were in open water staging for their mass migration to the shallows to spawn. They were eating ravenously, so if we found baitfish, we'd likely find crappie, too.

"We'll probably find them hugging the creek channel," Thomas said. "We'll want to get upstream from them and let the current drift us through them."

We found baitfish, but the crappie didn't bite. By 9 a.m., most of the boats were gone.

Piney Creek has a lot brushpiles along the channel. Some are huge and some are small, but they're great places to find crappie. We found a big brushpile on an inside bend. I used the trolling motor to stay just downstream of it, and we cast minnows upstream and let them drift over the brush under slip bobbers. We only caught one, but it was 14 inches long.

Thomas suggested taking a short trip up the Arkansas River to a place called Keener Cove. It's much shallower there, 5-10 feet, but the water temperature was also a little warmer. It was also deserted.

We anchored beside an old bridge piling over a submerged roadbed. I caught my next fish quickly, a 13-inch black crappie. We caught 10 more over the next couple of hours, a mix of whites, blacks and a blacknose. We got a lot more hits, but they felt more like collisions than bites.

This 6,700-acre fishing paradise about 30 minutes northwest of Little Rock is never deserted in the spring. The most popular spot is "The Hole," a big bay off Gold Creek, just a short boat ride upstream from Arkansas 365. A generous amount of vegetation lines the banks. If the water is up, the vegetation is submerged, and crappie burrow into it to spawn. I've had some great days dangling small tube jigs into the grass in water depths of less than 18 inches. When I caught a big crappie from a patch of grass, another one moved in to take its place in less than 30 minutes.

In March, when the water starts to warm, crappie move to live cypress trees, and then to the transition areas on flats. They stack up in "The Hole" during pre-spawn. In the middle of March, they school in the middle and then move to the banks as the pads start to grow.

This deep, crystalline impoundment of the White River is one of the last lakes in the state to come on line for great crappie fishing. In March, crappie are inactive except on sunny afternoons. You will find them on ledges in Hickory Creek, War Eagle Creek and up the main stem of the White River. Crappie also hover in brushpiles and beside standing timber on channel bends and flats close to the channel. The best water is less than 10 feet deep.

For lethargic crappie, dangle a jig under a bobber between 3-5 feet deep around the visible cover and brushpiles. Beaver Lake always has a lot of logjams in the coves and tributaries, and they hold a lot of crappie.

A warm stretch with several days of temperatures into the 60s often triggers crappie to move into bays close to the channels. That's a great time to use a black/chartreuse curly-tail and a 1/16-ounce lead jig to catch crappie between 12-17 inches long.

A 13,400-acre impoundment of the Caddo River near Arkadelphia, DeGray Lake is a miniature version of Lake Ouachita. Tammy Richardson, a guide on DeGray, said crappie fishing is best in the upper end of the lake in March because the water gets warmer sooner. Crappie are usually in or around brushpiles this time of year, and you can catch them with a twistertail grub on a light jig and spinning rod.

"In clearer water, a Kalin's twistertail in Tennessee shad is a real consistent producer," Richardson said. "If I've got stain, I use one with some chartreuse, but I wouldn't go without Tennessee shad."

From March 10-20, Richardson said you can catch crappie between 2-15 feet. She said they like to spawn around stumps in depths of 2-5 feet. The best fishing, she added, is from March 15 into April.

"The water temperature needs to be in the high 50s to 60s for it to be really good," Richardson said.

The eastern part of the state is loaded with all kinds of small lakes. Many are oxbows off the White and Mississippi rivers. Others are reservoirs. They are all loaded with crappie. Some notable examples are Grampus, Enterprise, Midway and Horseshoe. That last one is a dirty trick. There must be at least 25 Horseshoe lakes in eastern Arkansas. We're talking about the one near Hughes, the only lake in Arkansas with a daily limit of 50 crappie.

There's nothing technical or difficult about fishing these lakes. They are shallow and relatively featureless. The fish are hemmed in. Look for brushpiles in deep water and woody cover near the surface.

My favorite places to fish from the bank in Arkansas are next to the locks on the McClellan-Kerr Navigation System. I learned about this when I was in high school when I didn't have a boat. I was at Murray Park one afternoon when I swung by the dam and noticed people on the riprap on the downstream side of the lock. Every time a boat or a barge locked through, the current jolt activated fish, and people caught them hand over fist for as long as the jolt lasted. When the boat locked through, it was done.