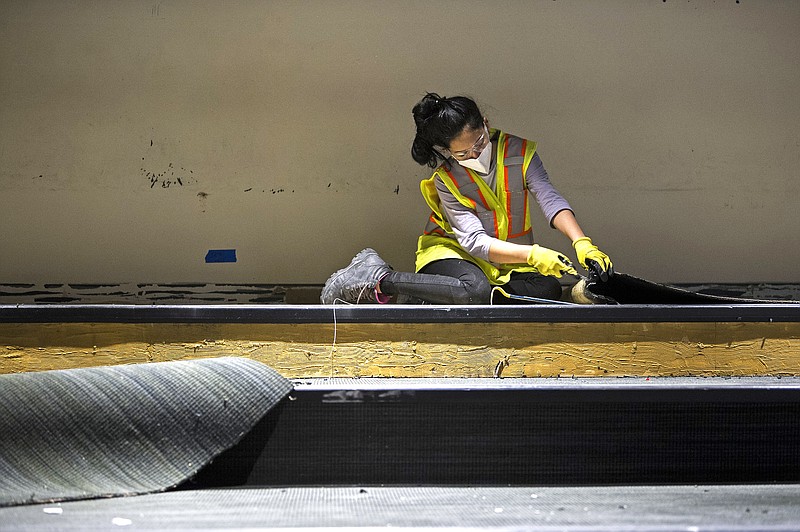 Mariangel Perdomo tears out carpet in the Awesome Science Theatre as she helps repair flood damage at the Museum of Discovery in Little Rock on Saturday, Feb. 27, 2021...(Arkansas Democrat-Gazette/Stephen Swofford)

Damage from a waterline break that left behind several inches of water at Little Rock's Museum of Discovery will likely cost millions of dollars to repair, museum officials said, and it will be several months before the museum can reopen.

On Feb. 18, during record snowfall and a cold snap that swept over the state, a broken water pipe flooded the Capital city museum, killing a blue-tongued skink lizard and forcing the evacuation of the other animals that call the museum home.

Kendall Thornton, Museum of Discovery marketing director, said the broken pipe, located in the boiler room on top of the building, ruptured overnight and was discovered by an employee who had come in to check on the museum's animals.

"A staffer found it [Feb. 18] when he went to go feed and check on the animals," Thornton said. She said the building's manager, Newmark Moses Tucker Partners, made an adjoining office building available for staff to evacuate the museum's animals, including birds, possums, snakes, lizards and other species.

"We had to get them to a safe space that would allow for heating for our lizards and snakes and that type of thing," she said. "Employees from Moses Tucker worked to locate the leak and shut down the electricity and kind of went from there."

On Wednesday, the animals were moved to a temporary home at the Little Rock Zoo, she said, where they will be housed away from the zoo's animals for the duration of the restoration. Thornton said the museum's virtual programming will also operate from the zoo in a limited capacity as well.

Museum of Discovery CEO Kelley Bass said Friday he didn't have an estimate on the damage yet, but it would likely total several million dollars.

"Right now, our insurance people think the damage to the building, meaning the carpet, the sheetrock, those kinds of things, is going to be at least $1.5 million," Bass said. "Then, we have the exhibits and the adjuster is coming in on Monday to look at the exhibits. So many of our exhibits involve electronics and we haven't had power, it's back on now, but we didn't have power in the museum and job one was really for the company, All-Clean USA, the disaster restoration company, to get the water out."

When the damage was discovered, he said, water was 4-5 inches deep inside the building on both levels of the museum. He said once the power was shut off, workers discovered multiple pipes attached to the boiler unit had burst and had found cracks in the boiler itself.

So far, it is not known to what extent the exhibits inside the building may be damaged, if they can be repaired or if replacement will be necessary, Bass said. He added that insurance adjusters will begin surveying the damage and putting together estimates Monday.

"When we put those exhibits in in 2011 and opened in January 2012, that was five and a half million dollars worth," he said. "I don't know what percentage of the exhibits are going to be fully trashed and which will be able to be repaired, but we're likely looking at millions of dollars on that exhibit side."

Added to that, Bass said, are the museum's computers, servers and other electronic equipment.

"I don't have any estimate on that," he said.

Bass said it is also difficult to make a prediction of when the museum will be able to reopen due to the uncertainty of which exhibits may have to be replaced.

"We can get the structure put back together, but those exhibits are all custom built," he said. "It's not like you can walk into a store, buy the exhibits, have them delivered and just turn them on."

The museum does have other exhibits stored in a warehouse that can be put to use, he said. The Museum of Discovery has maintained an inventory of exhibits that are available to be leased out to other museums around the country. Due to the covid-19 pandemic, however, Bass said only one of those exhibits is leased out, making the rest available for use.

"We'll take some of our traveling exhibits and supplement the empty gallery space as we need to and use those exhibits," he said. "But it's safe to say at this point that I can't see us being open before the first of May and it may be later than that."

When the Museum of Discovery is able to reopen, Bass said, it won't be exactly the same, but he said that could be a bright spot in the middle of the devastation.

"We have a lot of very popular exhibits, but when we're told how much money insurance is going to pay us to replace exhibits, that doesn't mean we have to go back and buy exactly the same ones we have," he said. "We're going to have new carpet and new paint, so I'm hoping we can have some new exhibits so that when we are able to open fully, that we've got a new experience for people to enjoy."

Another bright spot, Bass said, has been the number of people who have reached out to help since word got out about the damage, like the Little Rock Zoo.

Bass said the museum's educational staff has been delivering virtual programming for months due to the covid-19 pandemic, so getting those programs back up and running from the zoo, at least in a limited fashion, was relatively easy.

"It's been really gratifying during this covid situation that we've been doing programming for libraries and schools in Kentucky, Pennsylvania, I think we did Florida yesterday and of course we've done a lot for Little Rock and Arkansas schools too," he said. "When you're virtual there's no limitations on how broad your audience can be spread."

Bass said that people wanting to help the museum get back on its feet can donate through an online fundraising campaign at https://www.gofundme.com/f/museum-of-discovery-flood-damage-support. As of Saturday afternoon, the fundraising campaign had received over $19,000 from 172 donors toward a goal of $100,000.

CORRECTION: The building at 500 President Clinton Ave. that houses the Museum of Discovery is owned by the Arkansas Democrat-Gazette and managed by Newmark Moses Tucker Partners. An earlier version of this article misstated the building’s owner.