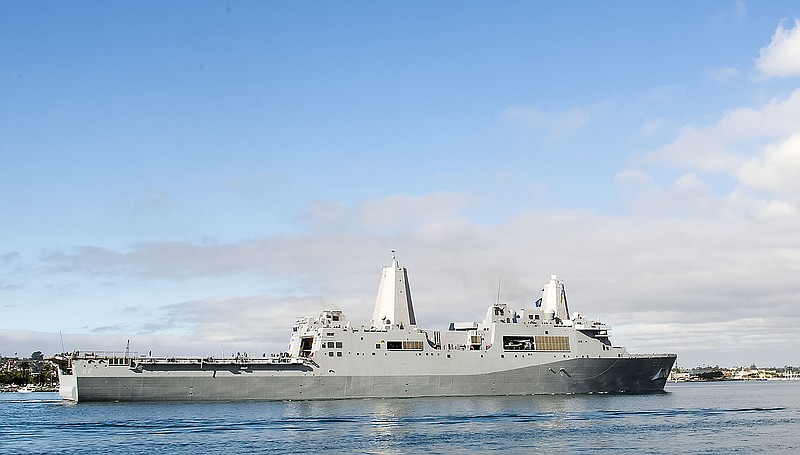 In this Dec. 6, 2012, photo released by the U.S. Navy, the amphibious transport dock ship USS San Diego sails in San Diego Bay in San Diego, California. Two U.S. Navy warships operating in the Mideast have been affected by the coronavirus, authorities said Friday, Feb. 26, 2021, with the San Diego already at port in Bahrain and another heading to port elsewhere. (U.S. Navy/Mass Communication Specialist 2nd Class Jonathan P. Idle, via AP)

DUBAI, United Arab Emirates -- Two U.S. Navy warships operating in the Mideast have been struck by coronavirus outbreaks, authorities said Friday, with both returning to port in Bahrain.

"All positive cases have been isolated on board, and the [ships remain] in a restricted covid bubble," Rebarich said. "The port visit and medical support have been coordinated with the host nation government and Bahrain Ministry of Health."

The San Diego sails with nearly 600 sailors and Marines aboard, while the Philippine Sea carries some 380 sailors.

The 5th Fleet patrols the waterways of the Mideast. Its vessels often have tense encounters with Iran in the Persian Gulf and the Strait of Hormuz, the narrow mouth of the Gulf through which 20% of all oil traded worldwide passes.

The Navy's largest outbreak so far in the pandemic was aboard the aircraft carrier USS Theodore Roosevelt, which had to be sidelined in Guam for nearly two months last year. More than 1,000 sailors tested positive and one died. Eventually all of the 4,800 crew members were sent ashore in Guam for weeks of quarantine, in a systematic progression that kept enough sailors on the ship to keep it secure and running.

The failure of the ship's leaders to properly handle the outbreak exploded into one of the biggest military leadership crises in recent years. The ship's captain, who pleaded for faster action to protect his crew from the rapidly spreading virus, was fired and the one-star admiral on the ship had his promotion delayed.

Earlier this month, three sailors tested positive as the aircraft carrier was conducting operations in the Pacific. The sailors and those exposed to them were isolated, and the Navy said it is "following an aggressive mitigation strategy," including masks, social distancing, and proper handwashing and hygiene measures. 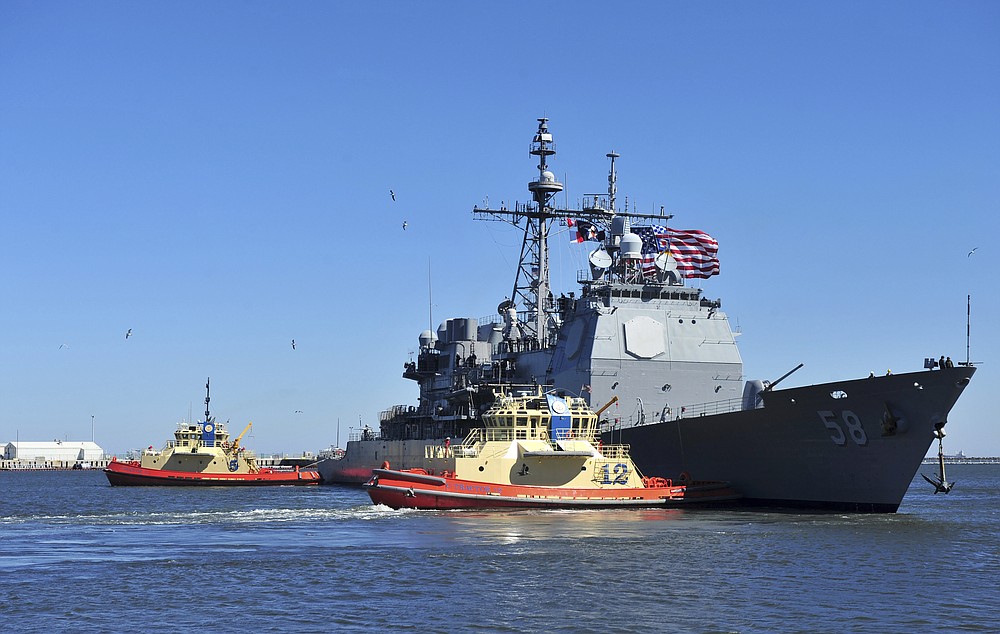 In this Feb. 15, 2014, photo released by the U.S. Navy, the guided-missile cruiser USS Philippine Sea leaves Naval Station Mayport in Mayport, Florida. Two U.S. Navy warships operating in the Mideast have been affected by the coronavirus, authorities said Friday, Feb. 26, 2021, with one already at port in Bahrain and another heading to port. The Philippine Sea will head to a port that the Navy declined to name over "operational security." (Mass Communication Specialist 2nd Class Marcus L. Stanley/U.S. Navy, via AP)
ADVERTISEMENT