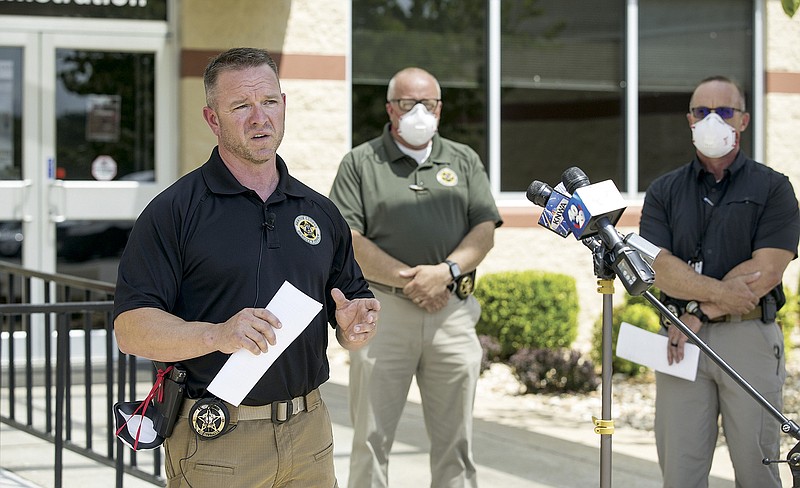 BENTONVILLE -- Benton County Sheriff Shawn Holloway is asking the public to replace inmates' books six months after confiscating almost all the reading material in the jail.

The Sheriff's Office removed most reading material from the jail in August because some inmates damaged and destroyed the books, said Shannon Jenkins, office spokeswoman.

Some inmates used paper from the books to cover vents, which can lead to heating and air-conditioning problems, Jenkins said. Some inmates also stuffed paper in doors or in toilets, causing their cells to flood, she said.

However, Jenkins said no records could be provided when first asked Feb. 2 for any written records of the destruction, cost of repair or discipline reports stemming from damage caused by inmates destroying reading material.

A request from the Northwest Arkansas Democrat-Gazette to the Sheriff's Office under the state Freedom of Information Act for any written or electronic communication on the destruction and decision to remove reading material also produced no records.

"I have not located any public record that discusses the decision to temporarily suspend the book cart service," Jenkins replied. "Often policy decisions, especially temporary policy decisions, are made by discussions that take place in person and which are not memorialized in writing or by recording."

Jenkins said in her response to the FOI request for disciplinary records they are filed by the inmate's name, not by the reason for the discipline. Maintenance and repair records don't indicate the cause of the damage, she said.

Rusty Turner, editor of the Northwest Arkansas Democrat-Gazette, said Tuesday the newspaper is still seeking the disciplinary records. He noted in a reply to the Sheriff's Office the law requires records be made available even if they are co-mingled with other records.

"We are simply trying to review the documents that formed the basis for the decision to remove books from the inmates back in August," Turner said.

Inmates still have access to the Bible and other printed religious material, Jenkins said.

Several inmates have written letters to the Northwest Arkansas Democrat-Gazette to complain they no longer have access to magazines and books. They requested books be returned to them.

Inmates said magazines, books sent by family and friends and donated reading material were all thrown away. One inmate said in his letter hundreds of dollars in textbooks he purchased were confiscated and tossed.

Jenkins said inmates cannot have any personal books with them in the jail. Personal books are kept with their other belongings and aren't discarded, she said.

People cannot bring books for a specific inmate, Jenkins said. Donated books are put in the cart for all inmates, she said.

Jenkins said office staff threw away all of the books because inmates damaged most of them.

Jenkins said in February officials were looking at providing televisions for inmates but didn't know if or when that would happen.

On Friday, Holloway's office announced a book drive this week, asking the public to replace the books. The book cart is a temporary solution until a more permanent digital solution -- one that might allow inmates to read books on an electronic device -- is implemented, Jenkins said.

Donated books will be distributed to those who qualify throughout the week, according to the Facebook post. Books can be dropped off at the jail clerk's window at the Sheriff's Office, according to the post. The drive started Monday and will end Friday.

Holly Dickson, executive director of the state's ACLU, said Tuesday through a spokeswoman the book cart is a positive step.

"We're glad the Sheriff's Office is taking steps to restore access to reading material to people in its custody, and we urge them to avoid such arbitrary and counterproductive restrictions on incarcerated people's access to information in the future," Dickson said.

Benton County Justice of the Peace Joseph Bollinger said he talked with Holloway about the issue and the sheriff told him he was looking into a digital solution for the jail.

"I believe providing books while being mindful of covid-19 mitigation measures and addressing security concerns on an individual basis is the proper course of action, and I am glad to see this being resolved," Bollinger said.

Jenkins said they are still working on a digital solution. Bollinger said he sent Holloway several options that could be provided.

"I feel a digital solution as a supplement on top of books being made available is an ideal solution to this issue and has my full support," he said.

People have donated some books to the jail, but Jenkins didn't have the amount the jail had received on Tuesday.

She said there are no guarantees inmates will not damage the books, but Sheriff's Office officials hope the inmates that enjoy reading will encourage others not to damage any books.

Book bans instituted by jails have been issues in other areas of the country.

A federal judge agreed in 2019 the First Amendment protected not only the right to speak, but also the right to read, but upheld the Cook County Jail's decision to the limit of three books at a time. An inmate sued the Illinois jail.

The judge found the limit wasn't unreasonable and jail officials said the limit was partly a safety issue because too many books could be used to start fires, according to ABC News.

There were 667 inmates at the Benton County Jail as of Tuesday.