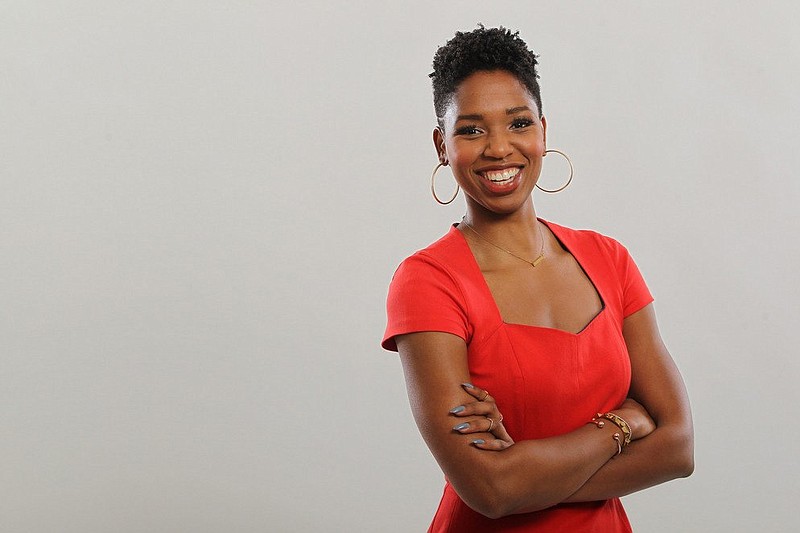 Monica McNutt will make her “Around the Horn” debut Wednesday. (ESPN/Travis Bell)

Monica McNutt’s year is off to a whirlwind start and showing no signs of slowing down. Less than two weeks after the ACC Network host and analyst made her “SportsCenter” debut in late January, McNutt was on the call for the women’s basketball thriller between No. 1 South Carolina and No. 2 U-Conn. from FS1’s studio in Charlotte, N.C. McNutt will add another bullet to her impressive résumé Wednesday, when she appears as a panelist for the first time on ESPN’s “Around the Horn.”

“I find myself pinching myself just a bit because honestly it’s happening a little quicker than I thought,” McNutt, 31, said.

Aaron Solomon, longtime coordinating producer of “Around the Horn,” called McNutt with the news earlier this month. He was familiar with her work on producer Erik Rydholm’s “UnSeen Productions,” a platform that gives talent a chance to practice their craft on mock shows posted on social media and circulated within the company, and prepares them for opportunities on the actual ESPN programs Rydholm oversees, including “Highly Questionable,” “Pardon the Interruption” and “Around the Horn.”

“One thing that you immediately notice about Monica is just how sure of herself she is,” Solomon said. “That’s not teachable. You either have that or you don’t, and she seems very confident and exudes it.”

McNutt, who grew up in Suitland, Md., honed some of her confidence on the basketball court. She was a two-year team captain at Georgetown, where she led the Hoyas to a Sweet 16 appearance as a senior in 2011. At a luncheon the summer after she graduated, McNutt was seated at a table with Solomon’s father, George, the former Washington Post sports editor and director of the Shirley Povich Center for Sports Journalism. When McNutt mentioned that she was interested in pursuing a career in journalism, Solomon encouraged her to consider the University of Maryland’s master’s program in sports broadcasting.

“George almost instantly became my journalism fairy godfather,” said McNutt, who got her master’s from Maryland in 2013. McNutt then worked at Prince George’s Community Television and as a multimedia journalist at News Channel 8 before her position was eliminated. She moved to Florida in summer 2015 to join the fledgling American Sports Network, an experience that was, at times, “a hot mess,” but gave her valuable experience covering a variety of sports. McNutt was laid off for a second time two years later.

“I had ideas of grandeur, of never coming back, but I packed up my apartment and came home with my tail between my legs,” McNutt said. “For the next 18 months, I struggled, but when I look back on it, it was so instrumental in me getting back to who I know to be.”

By the end of 2018, McNutt, who taught cycling classes at L.A. Fitness in Upper Marlboro, Md., to help pay the bills, was growing tired of looking for jobs on Indeed. Around that time, fellow Black women in the sports journalism industry helped lift her up. LaChina Robinson connected McNutt with her colleagues at FS1. Maria Taylor and Jemele Hill shared McNutt’s résumé reel on Twitter, calling her a “sports broadcaster on the rise” and “definitely one to watch for.”

On Dec. 2, 2018, McNutt made her national broadcast debut for FS1 as an analyst for a top-10 women’s basketball showdown between Mississippi State and Texas in Austin. The next few months brought additional opportunities, and when the ESPN-owned ACC Network debuted in 2019, McNutt was hired on a contract basis as an analyst. In addition to her expanding role at ESPN, she works as a host on MSG Networks, co-hosts the “Buckets, Boards and Blocks” podcast with fellow ESPN analyst King McClure and calls games for FS1 and CBS Sports Network with an infectious energy and enthusiasm that differentiates her from many of her peers.

“I have found that getting to do multiple things makes you better at all things,” McNutt said.

Over the past six months, McNutt has worked closely with producer Jasmine Ellis at “UnSeen Productions.” She co-hosted a mock show called “Here for It” with the Undefeated’s Justin Tinsley, who made his “Around the Horn” debut in January and has since made two additional appearances on the show.

“We’ve expanded our lineup quite dramatically over the years, and we’ve really tried to have as many voices and as many diverse voices as possible,” said Solomon, whose roster of rotating panelists is now more than 20 people deep.

“We are, I think, making progress in our industry, and seeing more diverse perspectives reflected, and I’m thankful to be a part of that, but we still have work to do,” said McNutt, who will make her “Around the Horn” debut alongside Clinton Yates, Jackie MacMullan and Frank Isola.

“I say to folks that I hope I am remembered for being prepared, having great energy and a great shade of lipstick,” she said with a laugh.