Slocum helps No. 18 Arkansas down LSU 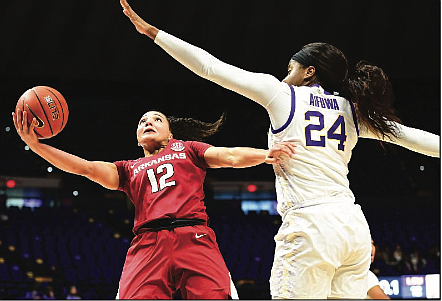 Destiny Slocum of Arkansas reaches to score past LSU’s Faustine Aifuwa on Sunday in Baton Rouge. Slocum had 29 points as the Razorbacks won 74-64 for their sixth victory in their past seven games. More photos at arkansasonline.com/222ualsu/ (Photo courtesy LSU Athletics)

The graduate transfer poured in a game-high 29 points after sitting out Friday's game because of an illness to lead the No. 18 Razorbacks to a 74-64 victory over LSU in Baton Rouge.

Slocum hit her first seven shots, finishing 11 of 15 from the floor and 5 of 7 from three-point range, as Arkansas (17-7, 7-6) never trailed and sent LSU to its fourth consecutive loss.

"I thought it was a favorable matchup," Neighbors said. "They went small with their starting lineup and it got us off. I think we hit three straight threes to start the game. It just got us a good frame of mind.

"It got us off to a great start and I thought she carried us at times when we went through stretches where we couldn't find a perimeter shot, she was really good driving it to the basket."

The 5-7 guard, who ranks second on the team averaging 15 points per game, hit a season high in points and was just one off her career-best. She added 4 steals, 3 rebounds and 2 assists in 37 minutes after not playing in the Razorbacks' win over Ole Miss.

But she returned to practice on Saturday and got the Razorbacks going early against LSU. Redshirt senior Chelsea Dungee added 20 points, coming off her 38-point performance against Ole Miss on Friday. Erynn Barnum chipped in 12 off the bench.

Arkansas enjoyed a double-digit lead most of the second half until Khayla Pointer's three-pointer with 15 seconds left got LSU (8-11, 6-7) within 72-64.

Pointer, a 5-8 senior, led LSU with 24 points, while Jailyn Cherry added 16 and a game-high nine rebounds. Arkansas held 6-5 senior Faustine Aifuwa, who is averaging a double-double in SEC play, to just four points on 2-of-8 shooting and three rebounds.

It was the Razorbacks' first win in Baton Rouge since 2016. But Neighbors liked the way his team was able to keep the Tigers at arm's length most of the second half.

"I think there were some areas we really improved on and learned from those things we've done in the past," Neighbors said. "There was a couple really good conversations during timeouts about time and score and understanding of the clock.

"We panicked a couple times. Eighteen turnovers is way too many for us. But in this environment against a team that was that aggressive, really happy and satisfied we did have some area we improved."

Arkansas has now won six of its last seven games and is looking to move up for possible NCAA Tournament seeding, according to pundits. Nina King, the NCAA Tournament committee chairman, said the Razorbacks were in the conversation on Monday for a top 4 seed in the tournament.

Neighbors said the Razorbacks are starting to discredit some of the naysayers, who were questioning them after losing five of their first seven SEC games.

"We finally have kinda taken a bullet out of some people's conversation or their narrative if they're trying to look for stuff on us. Because this year, in my opinion, league standings don't mean much. You don't play common people and certainly the home and the road is out of balance.

"But for so long everybody's been saying, 'Well, Arkansas's ranked so-and-so but they're ninth in their league or they're 10th in their league. ... I hope we can keep playing ourselves to take that piece of narrative out of anybody's conversation that might want to drag us down."

Arkansas settled for a 43-29 halftime lead after LSU's Ryann Payne hit three free throws with no time left on the clock. That was the only real damper on the first 20 minutes for the Razorbacks.

Arkansas hit its first four shots, including 3 three-pointers, to grab a quick 14-6 lead. Dungee, Makayla Daniels and Slocum each hit a three-pointer. The Razorbacks pushed the lead to 22-12 after a quarter.

Arkansas plays at Auburn on Thursday before hosting Alabama on Sunday to finish the regular season.