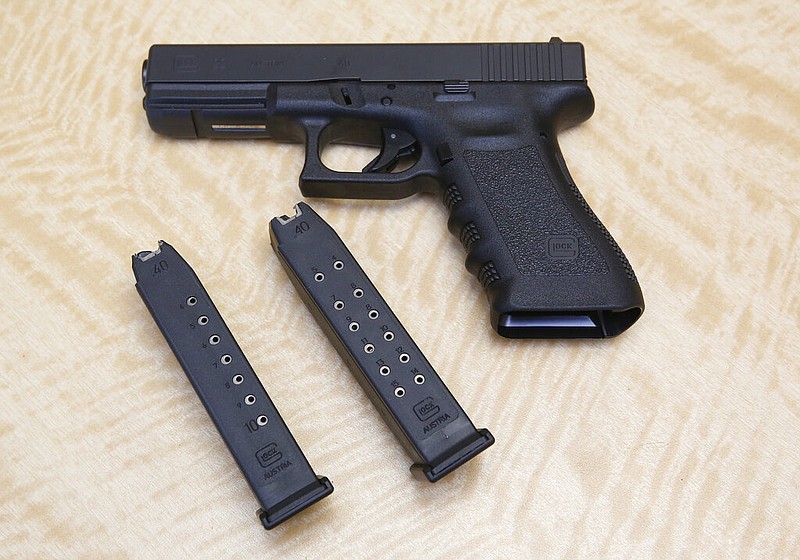 All but one state bordering Arkansas saw rates of gun deaths increase in the years after passing stand-your-ground legislation similar to a bill under consideration by the Arkansas General Assembly, a review of two decades' worth of federal mortality data by the Arkansas Democrat-Gazette found.

In Mississippi, Oklahoma and Missouri, the number of people killed in shootings per capita increased by double-digit percentages in the years after lawmakers approved stand-your-ground laws, which eliminate a person's "duty to retreat" before firing in self-defense. Louisiana and Tennessee each experienced smaller increases in the rates of gun deaths after such laws were enacted.

Texas, one of the early adopters of stand-your-ground legislation, was the only state around Arkansas to see a decrease in its rates of gun deaths, which fell 6.5% after Lone Star State lawmakers passed the law in 2007.

The Democrat-Gazette's review of federal data also found that Black people became more likely to die by gunfire in every surrounding state -- including Texas -- after lawmakers passed stand-your-ground legislation.

Meanwhile, the rates of gun deaths, excluding suicides, have fallen nationally in the roughly 15 years since state legislatures around the nation began passing stand-your-ground laws pushed by groups such as the National Rifle Association and the conservative American Legislative Exchange Council.

An effort to pass stand-your-ground legislation in Arkansas, Senate Bill 24, is currently stalled in the House, where it faces opposition both from conservatives who argue it does not go far enough to protect the rights of gun owners to shoot in self-defense, and from gun-control groups that point to studies showing that similar laws have led to increases in gun violence.

[Interactive graphic not showing up above? Click here to see it: arkansasonline.com/222stand/]

The House Judiciary Committee is scheduled to consider the bill again at a hearing Tuesday.

The sponsors of the bill, state Rep. Aaron Pilkington, R-Clarksville, and Sen. Bob Ballinger, R-Ozark, defended their efforts, noting the limitations of the data collected by the Democrat-Gazette and saying the bill could have other effects on Arkansas' high rate of violent crime.

"I would definitely say it gives me pause," Pilkington said in an interview Saturday. "We want to do this because we want to enhance our self-defense laws, not because we necessarily want to see more deaths in Arkansas."

Noting that the paper's data covered all deaths by firearms, other than suicides, he added that "we have to take into consideration, you know, how many of those deaths may have been related to police, how many of those could have been just general homicides that are completely unrelated to stand-your-ground."

Ballinger, in an email to the paper, said: "There are so many factors to try to control for I don't think ... there is any way to establish broad truths from the data. I guess one thing that is clear from the numbers is that SYG doesn't produce the 'killing fields' the anti-gun groups claim result from the legislation."

Kate Fletcher, a spokeswoman for the Arkansas chapter of Moms Demand Action for Gun Sense in America, said the data compiled by the newspaper fell in line with other research correlating stand-your-ground laws with increased gun deaths and a disproportionate harm to Black people.

"I think that the only thing we know for sure is that if [SB24] passes into law, there will be more dead Arkansans," Fletcher said.

In every state examined by the Democrat-Gazette, the rate at which Black people died by gun violence increased more than it did among white people after the passage of stand-your-ground laws.

Even in Louisiana and Texas, two states where per capita gun deaths among Black people increased the least, the rates of Black people shot to death far outpaced their white counterparts, whose rates either fell or stayed the same.

"The proof is in the pudding," said state Rep. Monte Hodges, D-Osceola, the president of the Legislative Black Caucus, after reviewing the newspaper's data.

To conduct its analysis of state-your-ground laws, the Democrat-Gazette examined federal mortality data by year and race for Arkansas and its six surrounding states for 1999 to 2019, the most recent year for which data was available.

This analysis included all gun deaths other than suicides. Suicides were excluded because stand-your-ground laws are extremely unlikely to apply in those instances.

Reporters also dug through legislative records and news stories to determine when lawmakers in other states passed legislation that included hallmark language of stand-your-ground laws, such as stating that a person "shall have no duty to retreat" or expanding that privilege beyond a person's home to include any public place where the person has "a right to be."

Without a more detailed analysis, it is impossible for the newspaper to state that the federal data alone shows that stand-your-ground laws caused increases in gun-violence deaths in these states. However, the paper's findings are in line with other studies that have shown that these laws are often associated with increased shooting deaths.

Florida lawmakers -- with the support of the NRA -- pioneered stand-your-ground legislation in 2005, adding language to the state's self-defense codes that read that "a person who is not engaged in an unlawful activity and who is attacked in any other place where he or she has a right to be has no duty to retreat and has the right to stand his or her ground and meet force with force."

Within two years, a number of other states adopted similar laws, often with the backing of the NRA and American Legislative Exchange Council, according to news reports.

Louisiana, Mississippi and Oklahoma each passed their own versions of stand-your-ground in 2006, and Texas and Tennessee followed the next year.

Missouri was the last of Arkansas' neighbors to adopt a stand-your-ground measure, with Republican lawmakers voting to override the veto of then-Gov. Jay Nixon, a Democrat, to pass legislation in 2016.

At least 25 states now have laws stating that there is no duty to retreat before killing someone in self-defense, according to the National Conference of State Legislatures.

Within years of states passing stand-your-ground laws, however, researchers and gun-control advocates began questioning the effects of the laws on crime and gun violence.

In 2018, a review of several studies conducted by the RAND Corp. found "moderate" evidence that stand-your-ground laws were linked to an increase in homicide rates, while at the same time determining that the laws' overall effect on violent crime was "inconclusive."

Not all studies reviewed by RAND reached similar conclusions.

"These findings are consistent with the fact that there is a great divide between urban and rural areas in terms of ownership and usage of guns, attitudes towards guns, and the implications thereof," the researchers wrote in an abstract to their work.

Stand-your-ground laws also became the subject of controversy after the 2012 death of Trayvon Martin, an unarmed Black teenager who was shot and killed by a man on neighborhood watch in Florida. (The shooter, George Zimmerman, did not raise Florida's stand-your-ground law as a defense at his trial, in which he was acquitted.)

A year after the shooting, the Tampa Bay Times published a review of more than 200 cases in which Florida's stand-your-ground law was invoked, finding that more than 70% of defendants who cited the law went free. Stand-your-ground defenses were even more effective when the victim in the case was Black, the paper found.

Arkansas' prosecutors, who opposed attempts to pass stand-your-ground legislation in 2019, have remained neutral this year after working with the sponsors of SB24 to add language addressing their concerns.

On Saturday, however, Pilkington said he was planning to propose an amendment to SB24 that would address concerns raised by gun owners regarding self-defense in areas where firearms are prohibited. Pilkington said he expected prosecutors to be opposed to the amendment.

Benton County Prosecutor Nathan Smith, the president of the Arkansas Prosecuting Attorneys Association, confirmed in a text message Saturday that the group was opposed to the "rumored change" and would oppose SB24 if the amendment were adopted.

Gov. Asa Hutchinson, a Republican, has yet to publicly state a position on SB24. Two years ago, Hutchinson expressed support for the state's self-defense laws as written.

A spokeswoman for the governor said Friday that he is waiting to see if changes to the bill are made in the House Judiciary Committee before "finalizing" his position.