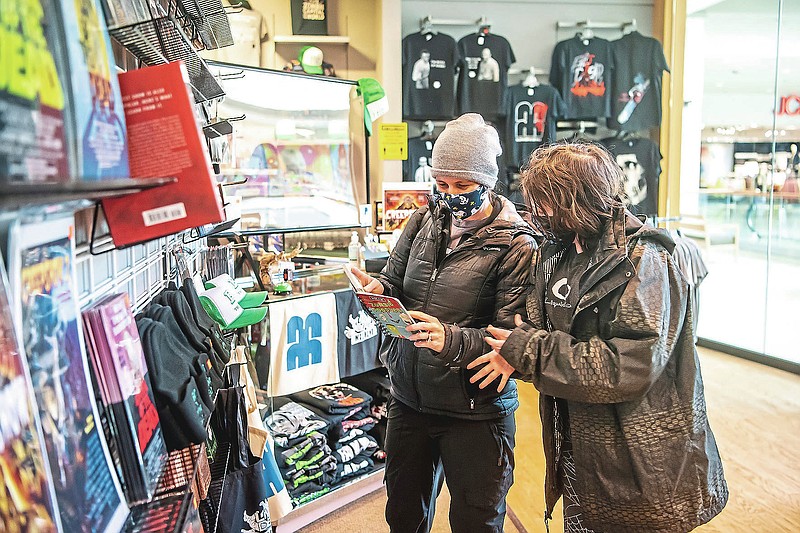 Iris Smith and Paxon Masters, 12, both of Sewickley, shop at the Living Dead Museum in the Monroeville Mall, Saturday, Feb. 6, 2021, in Monroeville, Pa. The Living Dead Museum, an institution dedicated to honoring the seminal 1968 zombie film “Night of the Living Dead” and its auteur, George Romero, had been a fixture in downtown Evans City since 2013. (Alexandra Wimley /Pittsburgh Post-Gazette via AP)

MONROEVILLE, Pa. -- It's no surprise that a museum dedicated to zombies couldn't stay in its grave for long.

The Living Dead Museum, an institution dedicated to honoring the seminal 1968 zombie film "Night of the Living Dead" and its auteur, George Romero, had been a fixture in downtown Evans City since 2013. The film was shot in and around the small Butler County community that prides itself on being the birthplace of the zombie genre.

But in October, the museum closed its Evans City doors -- only to rise again the following month at the Monroeville Mall, where the sequel "Dawn of the Dead" was filmed.

And fans can rest easy.

"Be assured that everything that was in Evans City will still be available and represented in Monroeville, plus a lot of great new surprises," said Kevin Kriess, the owner and curator of the Living Dead Museum.

The new museum will contain plenty of old favorite exhibits about the world of horror films, such as a timeline tracing 50-plus years of zombie movie history and the "Maul of Fame," a wall of celebrity horror stars' handprints. It will also make a point to delve more into Monroeville Mall's "Dawn of the Dead" bona fides.

"The new location ... will dig much deeper into that film with exhibits featuring screen-used props and set pieces, including the original (J.C.) Penney's Flyboy elevator -- which has been resurrected from the dead," Kriess said. Fans will understand the reference to a famed zombie character.

That's all well and good for Monroeville, but it does leave the town that Romero's work made iconic a bit more, well, zombie-like.

The Living Dead Museum was born in 2008 as one of many local monuments to Romero's "Night of the Living Dead," but it actually started at Monroeville Mall. After about five years, the museum was moved to downtown Evans City.

Kriess wants to be clear the decision to leave for Monroeville had nothing to do with Evans City itself and everything to do with the unfortunate realities of trying to run a business during a global pandemic.

About two years ago, he began planning to expand to a new Monroeville Mall location that would complement the Evans City museum's attractions. He didn't publicize that information pre-pandemic. He wanted it to be a surprise for horror fans the world over when it was ready -- complete with a grand opening.

The Monroeville expansion was set to open in spring 2020, which is when covid-19 upended all best-laid plans.

Financial constraints due to the pandemic forced Kriess into making the difficult decision to close one of the museums, and because he had already put so much time and effort into Monroeville construction, he opted to shutter the Evans City location.

"For all intents and purposes we did move, but it didn't start out with that plan."

At the moment, only the museum's gift shop is open at the mall due to the covid-19 pandemic. Kriess hopes the full display of memorabilia will be publicly accessible by this summer.

Back in Evans City, Mayor Dean Zinkhann is acutely aware of how much his city will miss the Living Dead Museum.

He said it was a very good attraction for the town -- a small borough in Butler County with an estimated population of 1,710 as of 2019, according to U.S. Census data -- that sees a lot of tourism from horror fans making the pilgrimage.

Folks come from all over the world for the "Living Dead" experience, including a couple from Australia who got married at the Evans City Cemetery Chapel. As much as he'll miss those novelty ballpoint pens that shoot out fake blood, Zinkhann understands why the museum had to go.

"Money talks and people walk," he said. "And they don't have the money to pay the rent and employees. What are you going to do?"

Zinkhann hopes the visitors will keep coming anyway. Tourists will still be able to check out all the other tributes to "Night of the Living Dead" around Evans City, including "Living Dead" historical markers downtown, places seen in the film such as the cemetery and chapel, and the Evans City Historical Society Museum, which features tons of information about the movie.

The mayor's view that the economic hit will be limited is supported by Jerry Oliver, 54, of Center Township, who owns several buildings surrounding the old Living Dead Museum and is currently trying to acquire that space as well. He's confident Evans City will continue to be the "best kept secret north of Pittsburgh."

"That building will be reinvented," said Oliver. "The Living Dead Museum was great but pretty niche. I think the business impact was sporadic at best, and maybe something that's more regular and mainstream will do just fine."

It helps that the museum will still be putting on its biannual Living Dead Weekends, festivals celebrating all things horror, in both Monroeville and Evans City.

One of the co-founders of the festivals is Gary Streiner, 74, of Evans City, who worked as a sound engineer on "Night of the Living Dead" and is now on the board of Image Ten Inc., the production company that handles the "Living Dead" franchise's affairs.

"'Night of the Living Dead' found Evans City, but the two came together at a point in 1967 that will go on forever," he said.

To Streiner's point, the films have displayed an enduring popularity, exemplified recently when a group of University of Pittsburgh film students screened their new documentary "George Romero & Pittsburgh: The Early Years" that used footage from the school's Romero archives to chronicle how the filmmaker rose to prominence.

Rick Reifenstein, 80, of Evans City, is the other co-founder of Living Dead Weekend and also president of the Evans City Historical Society. He plans to make his museum's "Living Dead" exhibitions "a little more visible" now that the other museum is in Monroeville.

He believes the movies have done quite a bit for the local economy, although some locals still "don't realize the weight of the whole deal, the value of it all."

"I don't think the pandemic is going to dampen anybody's spirits for that," he said. "I'm sure they're still going to be coming in here."

Even with the Living Dead Museum gone for the foreseeable future, the town that helped inspire its existence is never far from Kriess' mind.

"We're not giving up on Evans City," he said. "Evans City is very important to me and what we do." 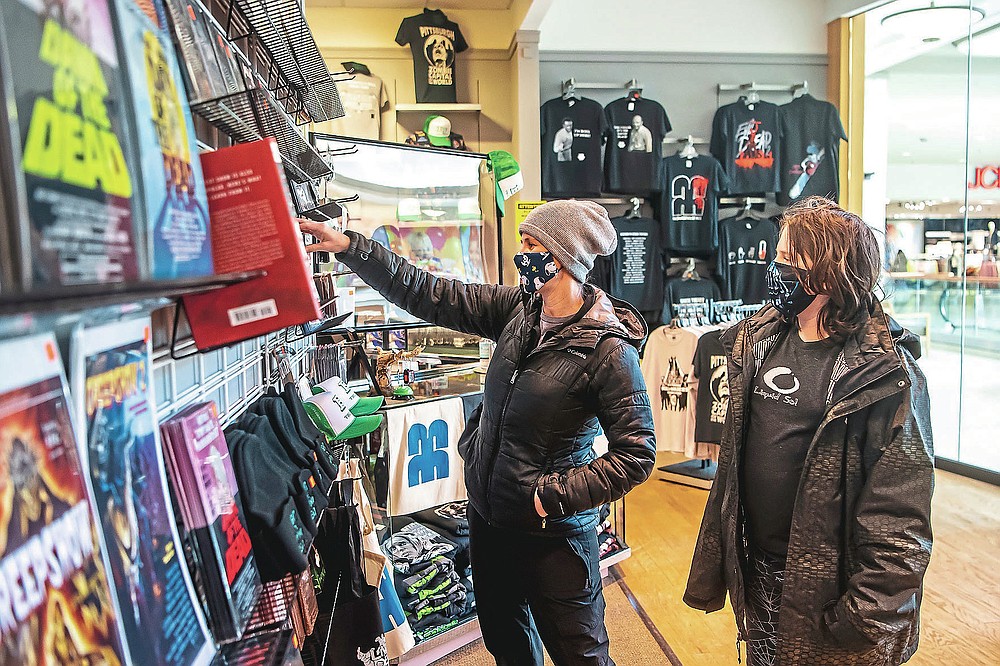 Iris Smith and Paxon Masters, 12, both of Sewickley, shop at the Living Dead Museum in the Monroeville Mall, Saturday, Feb. 6, 2021, in Monroeville, Pa. The Living Dead Museum, an institution dedicated to honoring the seminal 1968 zombie film “Night of the Living Dead” and its auteur, George Romero, had been a fixture in downtown Evans City since 2013. (Alexandra Wimley /Pittsburgh Post-Gazette via AP) 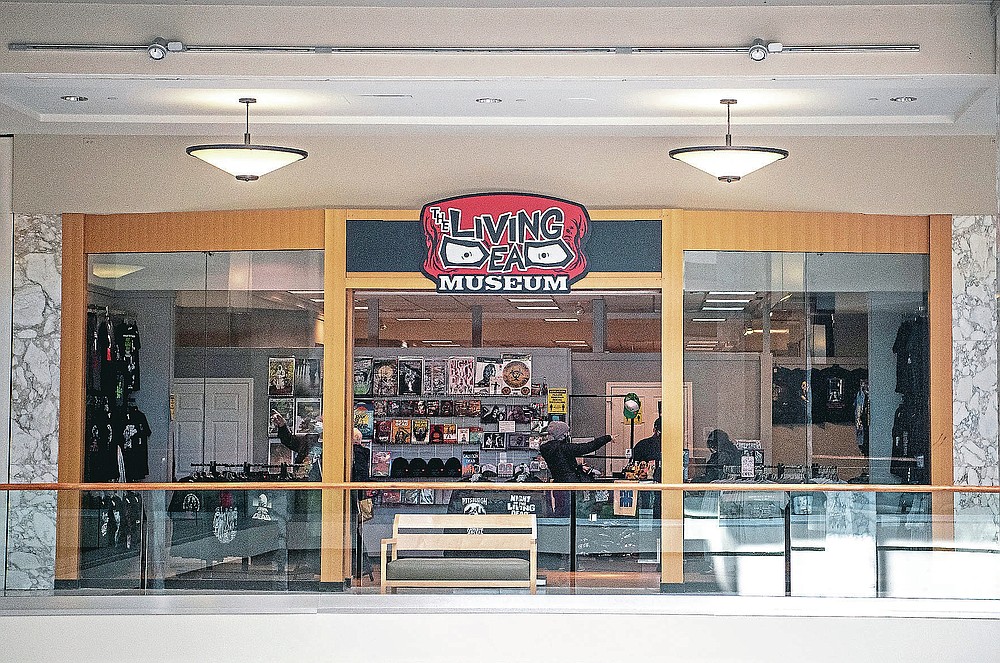 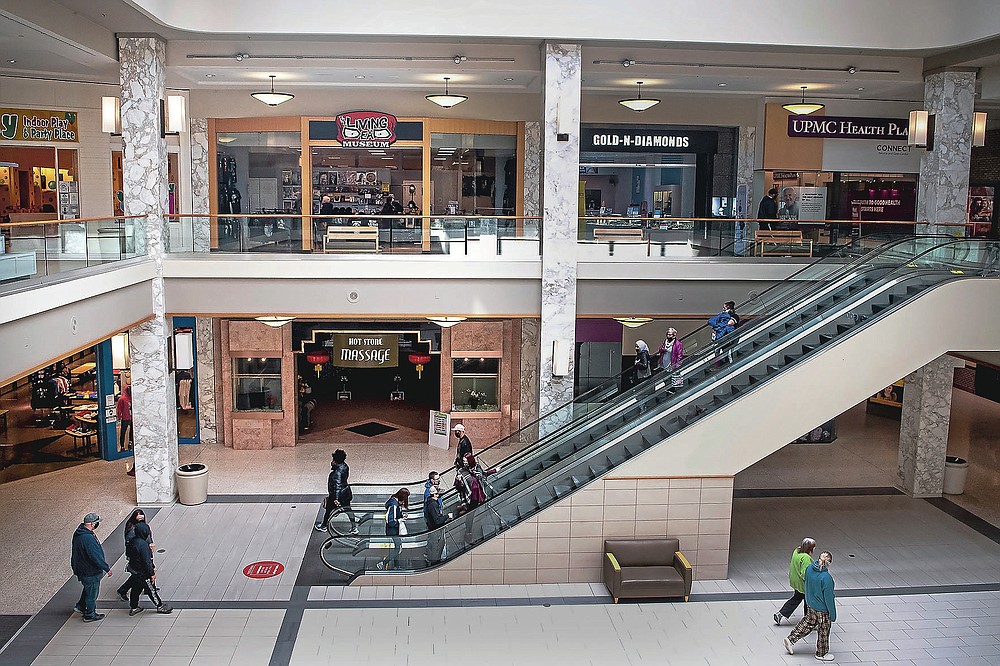