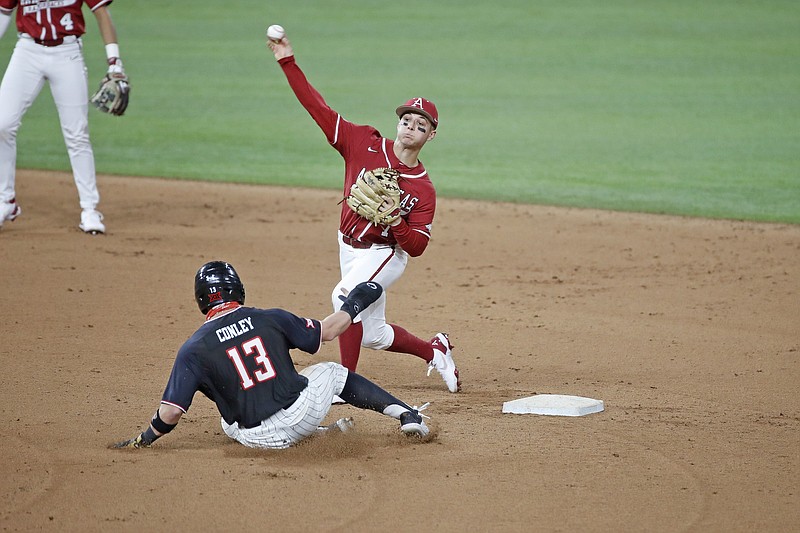 Arkansas second baseman Robert Moore (1) steps on the bag before throwing to first base to complete a double play during Saturday's game against Texas Tech during the 2021 State Farm College Baseball Showdown at Globe Life Field in Arlington, Texas. - Photo by James D. Smith, Special to the Democrat-Gazette

The University of Arkansas and Texas Tech played a season-opening thriller Saturday night that spilled into Sunday morning.

The No. 8 Razorbacks scored five runs in the top of the ninth inning and defeated the No. 4 Red Raiders 13-9 at Globe Life Field in Arlington, Texas.

Arkansas capped a 3-0 day for the SEC over the Big 12 at the College Baseball Showdown. Mississippi State defeated Texas 8-3 and Ole Miss defeated TCU 7-3. All six teams are ranked in the top 11 of the preseason USA Today Baseball Coaches Poll.

[Video not showing up above? Click here to watch » https://www.youtube.com/watch?v=PBuOcXrQTCU]

Arkansas and Texas Tech threw a first pitch more than an hour later than originally scheduled because the preceding game between Ole Miss and TCU ran long.

The wait was worth it as the Razorbacks and Red Raiders thriller did not end until 12:39 a.m. Central -- 4 hours, 18 minutes after it began.

"That game was crazy," Arkansas Coach Dave Van Horn said. "That was one of the craziest games I've been in in a while.

Arkansas took a 10-9 lead when freshman Cayden Wallace scored on a wild pitch by Texas Tech freshman right hander Andrew Devine in the top of the ninth inning.

The Razorbacks tied the game in the previous at-bat on Jalen Battles' RBI single to left field that scored Casey Opitz, who singled to right field to lead off the inning.

Battles scored on a second wild pitch by Devine to put the Razorbacks ahead 11-9, and Braydon Webb added a two-run single to center field to give Arkansas some cushion at 13-9.

Beginning in the fifth inning, the teams swapped leads six times, including twice in the seventh when both teams scored three runs.

"We had the opening-day jitters and just kind of excited to play and it's been awhile," said Webb, who made the game's defensive highlight in left field with a leaping catch at the wall in the third inning to rob Cole Stilwell of an extra-base hit. "We kind of settled in later in the game and got momentum on our side and made it happen."

Trailing 6-5, Arkansas loaded the bases with one out in the top of the seventh on singles by Cullen Smith and Brady Slavens, and a walk by Opitz.

But the Red Raiders answered back in the bottom of the seventh after Arkansas reliever Ryan Costeiu walked Stilwell and former Razorback Easton Murrell to lead off the inning. Following a pitching change, Fulford homered to left field in the next at-bat on a 3-2 pitch from Elijah Trest to put Texas Tech back ahead 9-8.

Trest stayed in the game and earned the win by pitching scoreless eighth and ninth innings. The sophomore right-hander struck out four batters, including Kurt Wilson to end the game.

"Very rarely does a reliever get a chance for a little bit of redemption to stay in the game and get him out for the next two innings," Van Horn said. "We come back, get a win, and he gets a win personally. He's a veteran, he's a strike thrower and couldn't put the first hitter away. He hit a home run. You could tell he was a little frustrated, but he fought his way through that inning.

"He ended up getting out of the inning and obviously gave us a chance to hang around close. Even down the line, we felt like we could come back and win it."

The high-scoring game couldn't have been predicted early when starters Zebulon Vermillion of Arkansas and Patrick Monteverde of Texas Tech held the high-powered lineups in check.

Monteverde was pulled after throwing 64 pitches in four innings. The senior left hander allowed 3 base runners on 1 hit and 2 walks, but never was in serious danger. He struck out five Razorbacks.

Brandon Birdsell replaced him in the fifth inning and quickly ran into trouble. Arkansas loaded the bases with one out on two walks and a single by Battles.

Birdsell issued a two-out bases-loaded walk to Smith to give the Razorbacks a 1-0 lead, but Arkansas stranded the bases loaded when Webb grounded out to end the inning.

The Red Raiders' first six batters reached in the bottom of the fifth inning against Vermillion, Caden Monke and Kevin Kopps, part of a five-run frame that gave Texas Tech a 5-1 lead.

But Arkansas answered with four runs in the top of the sixth to tie the game 5-5.

The Razorbacks loaded the bases with a hit batsman and two walks, and scored on Battles' two-run double, a wild pitch and a sacrifice fly by Robert Moore.

"They're up 5-1 and we just scored a run, so you're thinking, 'Wow, we haven't done much. This is going to be tough,'" Van Horn said. "And for us to be able to come back and tie that thing up showed a lot about our team and just that they didn't let it get to them. They just kept chipping away."

Battles, a junior-college transfer shortstop playing in his first game with Arkansas, went 3-for-5 with 3 RBI and 2 runs scored.

"He's got some inner fire and intensity about him that I like," Van Horn said. "Kind of a gamer."

Vermillion allowed 2 runs on 3 hits and 2 walks in 4 innings, and struck out 4 in his first career start.

The teams combined to throw 13 pitchers.