Dental experts chew through myths about tooth-grinding and clenching

Bruxism’s a normal human behavior that can get out of hand but also plays beneficial role by Kate Murphy, The New York Times | February 22, 2021 at 1:52 a.m. 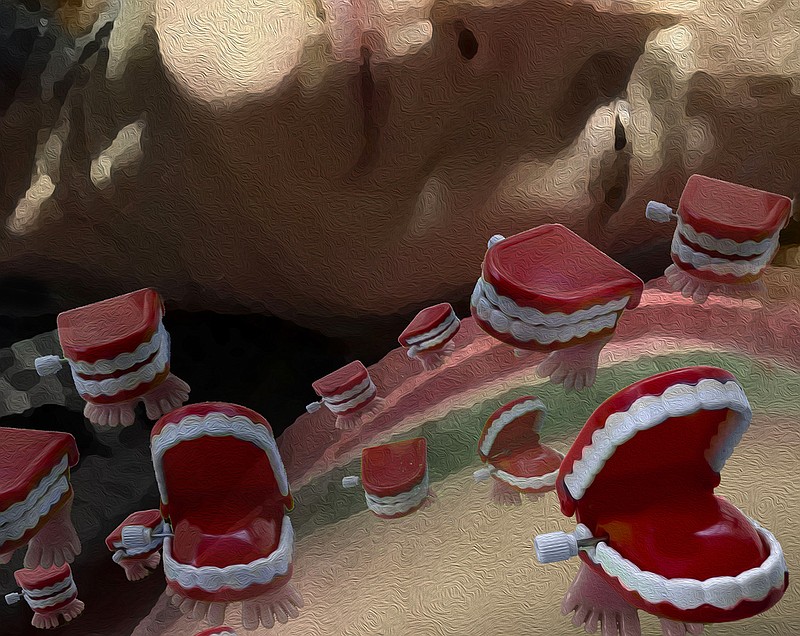 Everyday stressors such as a report due at work or the refrigerator breaking sometimes make you want to grit your teeth. But layer on top of that a pandemic, economic uncertainty and political upheaval, and you might start to give your jaw a serious workout -- gritting and grinding with as much as 250 pounds of force.

Dentists have reported an increase in patients with tooth fractures since the start of the pandemic. They attribute the increase to bruxism, the technical term for gritting, grinding or clenching your teeth.

Thought to be precipitated or exacerbated by stress and anxiety, bruxism is largely subconscious and often occurs during sleep. Most people don't know they grind their teeth unless a dentist tells them so, based on tooth wear. Less obvious indicators include itchy or plugged ears, neck pain and even premature aging of the face.

While night guards may help to prevent dental wear and tear, some studies suggest they can be ineffective or even make the problem worse. This has led some experts in the fields of dentistry, neuroscience, psychology and orthopedics to say there needs to be a paradigm shift in our understanding of the causes and treatment of bruxism: They say it is a behavior, like yawning, belching or sneezing, rather than a disorder.

"It's not abnormal to brux," said Frank Lobbezoo, a bruxism researcher and professor and chair of the Academic Center for Dentistry Amsterdam in the Netherlands. "In fact, it can be good for you."

activity in the jaw's masseter muscle (your major chewing muscle) during the night. It also happens during non-REM sleep. So, contrary to popular belief, you're not doing it while you are dreaming.

Moreover, the evidence suggests that this muscular activity can have the salubrious effect of opening up your airway to allow in more oxygen. Clenching and grinding also stimulate salivary glands to lubricate a dry mouth and neutralize gastric acid. As a result, experts say, it can be dangerous to wear a night guard or splint if you have sleep apnea or severe gastroesophageal reflux disorder (GERD).

"There's tremendous overtreatment for a nonproblem," said Karen Raphael, psychologist and professor at New York University College of Dentistry, referring to the widespread use of bite guards, tranquilizers and even Botox injections to prevent bruxism. "There is no evidence that tooth wear patterns reflect current grinding."

Indeed, she said, tooth wear is more often associated with an acidic diet, which erodes enamel and triggers bruxism to increase the pH in the mouth. Treating bruxism in this instance would be treating the effect rather than the cause.

Of course, an overproduction of stomach acid and reflux often occur during times of stress, which might in part explain why dentists and patients are reporting more cracked teeth and jaw pain since the start of the pandemic.

Also, people tend to drink more alcohol when they are anxious. Even mild intoxication leads to more flaccid neck muscles, which can cause an increase in the duration and force of bruxism to restore airflow.

Other factors that could increase bruxism are poor sleep hygiene and bad posture. If you are a light or poor sleeper, you spend more time in non-REM sleep, which is when people naturally brux. This can be caused by stress but also by consuming caffeine or sleeping with your phone.

So the question is not so much whether you brux, but why you might be bruxing more than is normal and possibly causing jaw or dental problems.

"Bruxism is not a disease," said Gilles Lavigne, a neuroscientist, dentist and professor at the University of Montreal. "It's just a behavior, and like any behavior, when it reaches a level that it's bothersome, you may need to consult someone."

Perhaps a physical therapist can teach you how to relax your jaw and do abdominal breathing. And maybe a psychologist can help you modify behaviors that lead to an increase in bruxism, like eating too much before bed and drinking more than your share of wine and whiskey.

But simple awareness of the position of your mouth, tongue and teeth throughout the day could go a long way toward preventing tooth-grinding. "Nobody knows where their tongue is when they are at rest," said Cheryl Cocca, a physical therapist at Good Shepherd Penn Partners in Lansdale, Pa., who treats patients with bruxism.

She recommends continually checking to make sure you are breathing through your nose with your mouth closed, your tongue resting on the roof of your mouth, and your teeth apart. Set a timer if you need to remind yourself, or do it every time you stop at a red light or get a text alert.

Part of the problem could be the modern diet. A growing body of evidence supports the once-fringe notion that, following the agricultural and industrial revolutions, as humans began eating foods that are more processed and easier to chew, we came to have smaller jaws than our ancestors and underdeveloped orofacial muscles. A result, researchers say, is that we tend to breathe through our mouths, with our tongues resting on the bottom of our mouths.

"Watch people on the subway, watch people on the bus, they're all on their phones, their mouths are slightly open breathing in and out. Particularly kids, they all are," said Dr. Tammy Chen, a prosthodontist in New York who has written about the increase in tooth fractures. "As soon as the mouth is open, the tongue is down. The tongue should always be on top of the mouth pushing up and out," which strengthens face and neck muscles, widens the jaw and opens the airway.

At night, our modern penchant for soft pillows and mattresses, rather than lying on the ground as our ancestors did, makes our mouths more likely to fall open and for us to drool, leading to a drier, more acidic mouth microbiome, not to mention sagging neck muscles, which further obstruct the airway.

A firm pillow, or a folded blanket under the head, can help, as can committing to an orofacial, neck and airway stretching and strengthening routine. Cocca recommends daily repetitions of pulling your head back into your neck as if you were trying to retreat from someone leaning in for a kiss and also nodding your head down until your chin touches the base of your throat.

Other good exercises are squeezing your shoulder blades together and holding, as well as putting your arms up like a goal post and leaning into a doorway to stretch out your chest.

Research also indicates diaphragmatic breathing and singing can strengthen and expand your airway muscles to reduce snoring and bruxism.

While bite guards worn during the day or night won't stop you from grinding, Chen said, they can act as a bumper to protect teeth. But only if they are carefully designed according to the size and shape of your mouth, and of materials specific to whether you are a grinder, clencher or chomper. Hard acrylic guards are thought to be better for grinders and chompers while softer rubber guards are better for clenchers.

However, experts caution guards can sometimes make the problem worse, particularly if they are poorly made.

"Bruxism often comes down to a breathing or airway issue," Chen said. "Night guards are a Band-Aid, but if you want to stop grinding, you have to get to the root cause of the issue."