Fauci: Masks' use foreseeable into '22

Shots for high-schoolers among goals by Compiled by Democrat-Gazette Staff From Wire Reports | February 22, 2021 at 7:22 a.m. 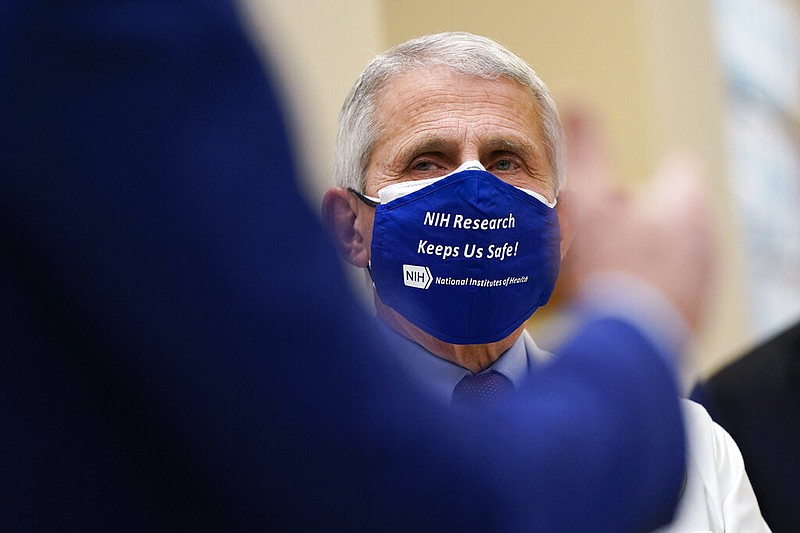 Dr. Anthony Fauci, President Joe Biden's chief medical adviser for covid-19, said Sunday that Americans may still be wearing masks outside their homes a year from now, even as he predicted the country would return to "a significant degree of normality" by fall.

"I want it to keep going down to a baseline that's so low there is virtually no threat," Fauci said on the CNN's "State of the Union," referring to the number of cases nationally that would make him comfortable enough to stop recommending universal masking. "If you combine getting most of the people in the country vaccinated with getting the level of virus in the community very, very low, then I believe you're going to be able to say, for the most part, we don't necessarily have to wear masks."

Fauci appeared on several TV news programs Sunday morning, where he answered questions on the dangers of variants of the coronavirus, the schedule of the nation's vaccine rollout and when vaccination would allow more students to return to schools.

Fauci said on "Fox News Sunday" that he hoped high school students, far fewer of whom have gone back to classrooms compared with younger children, would be eligible for vaccination in the fall.

"That's why we are pushing on those studies, to get them vaccinated," he said of teenagers, who are the subject of clinical trials by Pfizer and Moderna. "That will likely occur in the fall; I can't say it's going to be on Day 1 of when school starts in the fall term."

Vaccinations for younger children, however, "likely will not be before the beginning of the first quarter of 2022," Fauci said.

On the question of whether people should wait longer than the recommended three or four weeks to get a booster vaccine, or even skip the second dose, Fauci said on NBC's "Meet the Press" that it was prudent for people to stick to the prescribed schedule.

"There are enough unknowns in that, particularly the durability of the protection," he said.

He added that while new data suggesting people who have had covid-19 could get enough protection from one dose was "really quite impressive," it might be complicated to document who has had the virus.

He also addressed the subject of the mutated variant of the coronavirus identified in South Africa. In clinical trials involving the AstraZeneca-Oxford vaccine in that country, patients who were inoculated were not protected from mild or moderate illness caused by the variant, known as B. 1.351. Fauci said on "Fox News Sunday" that while it is rare in the United States, "if it becomes more dominant, we may need a version of the vaccine that's effective specifically against" it.

[Video not showing up above? Click here to watch » https://www.youtube.com/watch?v=ANOzLyw5uZQ]

With the United States expected to surpass 500,000 deaths from covid-19 in the coming days, Fauci told Chuck Todd on "Meet the Press" that "we haven't seen anything even close to this for well over 100 years," since the 1918 influenza pandemic, adding, "People will be talking about this decades and decades and decades from now."

Speaking on "Meet the Press," Fauci also expressed optimism Sunday that vaccination sites around the country would quickly recover from delays in coronavirus vaccine inoculations caused by weather-related shipping delays last week, and administer all 6 million missed doses while still ramping up the number of new appointments.

"We can play pretty good catch-up," Fauci said, noting that 2 million of the delayed doses had already been shipped. "When you just, you know, put the foot to the accelerator and really push, we'll get it up to where we need to be by the middle of the week."

The U.S. rate of vaccinations, which had been accelerating after a slow start, fell last week after winter storms blew through much of the country. About 1.52 million vaccine doses were being administered per day, according to a New York Times database. Although that is still above Biden's target, it was the lowest rate since Feb. 8.

The country has been racing to vaccinate as many people as possible before more contagious and possibly deadlier variants of the coronavirus become dominant, and the figure had been well above the president's goal of 1.5 million doses for several days. It peaked at 1.7 million Tuesday before a brutal winter storm hit states from coast to coast. The bad weather delayed shipments of vaccine supplies from two hubs: a FedEx center in Memphis and a UPS site in Louisville, Ky.

More than 2,000 vaccine sites were in areas with power failures, according to the Federal Emergency Management Agency. Many were not only forced to close but left relying on generators to keep doses at the ultracold temperatures they require to prevent them from spoiling.

Texas, after a frigid storm left millions without power and water for a time, has reopened inoculation sites. The state has been assigned almost 600,000 first doses of the vaccine this week, according to the state health department, up from about 400,000 first doses for the week of Feb. 15.

The doses that were supposed to be delivered last week are still waiting to be shipped to Texas from out-of-state warehouses, state health officials said. The missed doses are expected to be delivered in the first half of this week.

On Sunday, Houston's mayor, Sylvester Turner, said on "Face the Nation" that vaccinations had resumed there and that a FEMA site would open today with the potential to administer shots to 6,000 people a day for the next six to eight weeks. He estimated the city could vaccinate more than 100,000 people in the coming week.

"The people are resilient," he said. "I'm very proud of the people in the city of Houston, how they have come together."

In Dallas, a major vaccination hub at Fair Park reopened Sunday, but sites in Austin remain closed. The mayor of neighboring Fort Worth, Betsy Price, also appeared on "Face the Nation" and said that vaccinations would resume in her city today or Tuesday.

Much of the increase, according to data from the Centers for Disease Control and Prevention, comes from people receiving their second dose of the Moderna or Pfizer vaccine. The pace of first-dose vaccinations, meanwhile, has been largely steady over the past several weeks, hovering around an average of 900,000 shots per day.

Increasing both the rate of first-dose administrations and the rate of overall vaccinations will be key to achieving herd immunity -- estimated to require vaccination of about 80% of the population -- in hopes of ending the pandemic and curtailing the emergence of potentially even more dangerous "mutant" strains of the coronavirus.

A year into the pandemic, the running total of lives lost was over 498,000 Sunday evening-- roughly the population of Kansas City, Mo., and just shy of the size of Atlanta. The figure compiled by Johns Hopkins University surpasses the number of people who died in 2019 of chronic lower respiratory diseases, stroke, Alzheimer's, flu and pneumonia combined.

The global death toll was approaching 2.5 million, according to Johns Hopkins.

While the count is based on figures supplied by government agencies around the world, the real death toll is believed to be significantly higher, in part because of inadequate testing and cases inaccurately attributed to other causes early on.

Information for this article was contributed by Abby Goodnough, Lucy Tompkins, Christina Morales and Giulia McDonnell Nieto del Rio of The New York Times; and by Zeke Miller, John Raby and Heather Hollingsworth of The Associated Press.