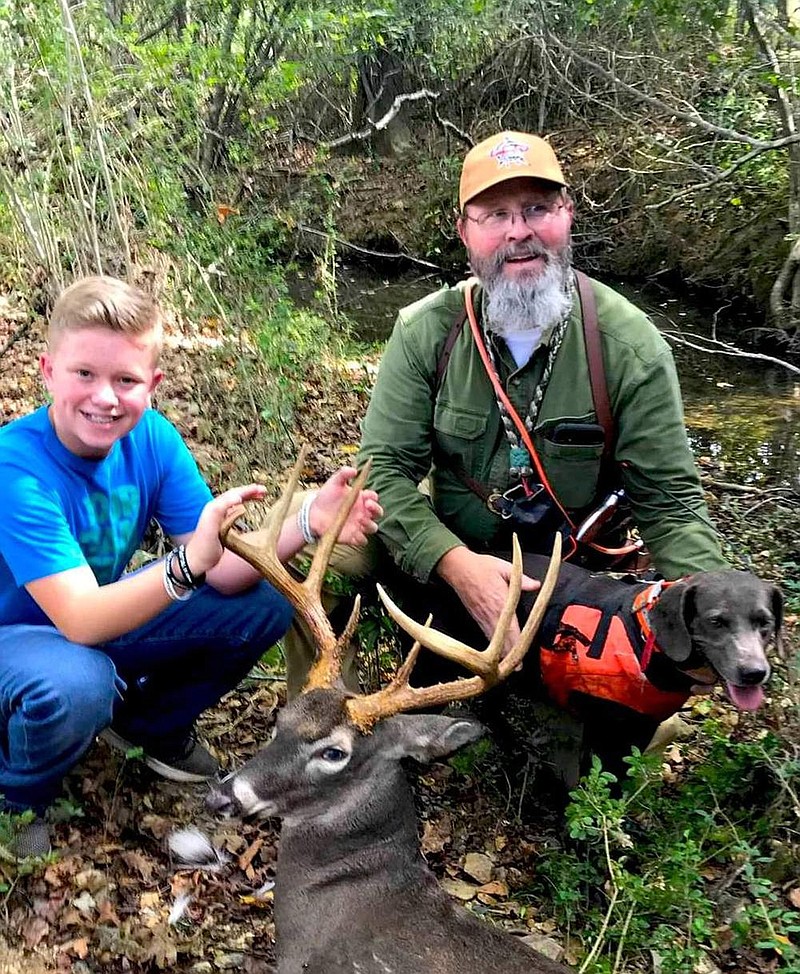 Katie, a blue lacy owned by Brad Besancon of Malvern, accounted for 48 of the 856 deer recovered by trackers in the Arkansas Blood Trailing Network in 2020, including several taken by youngsters. Mortally wounded deer often go to water, which can make it difficult for a human to follow a blood trail without help from a dog. (Photos submitted by Brad Besancon)

Arkansas deer hunters checked 214,022 deer in the 2020-21 season, and trackers in the Arkansas Blood Trailing Network found 856 of them.

While that's a significant increase over the 509 deer recovered in 2019, it's less than one-half percent of the total deer harvest. However, that number represents 856 happy hunters who otherwise would have been disappointed. More importantly, those deer ended up as venison and wall mounts instead of food for coyotes and vultures.

Brad Besancon of Malvern, one of the network's founders and the Facebook page administrator, said there are 67 active trackers in the network and that 2020 was a record year for trackers who found 20 deer or more. Besancon recovered 48 deer. Donnie Deaton of Gurdon recovered at least 71.

As with duck hunting and upland bird hunting, dogs are the marquee performers in blood trailing. Besancon's dogs, Katie and The Dude, are blue lacys, the official state dog of Texas. Deaton also owns blue lacys. If a deer is fatally wounded, Katie will find it, Besancon said.

"I've had people offer me some pretty large numbers for my dog," Besancon said. "This is not a cadaver dog. She's not going to come out here a week and a half after you shoot a deer and call that a recovery. You could bring your yard dog, and it might smell rotting meat and find your deer. My dog is not going to do that. Most of the deer my dog bays are not going to survive that wound."

Ideally, a deer drops in its tracks, but not always. They can run for a lot of different reasons, and they can run a long way. The most common reason is because a hunter attempted a low-percentage shot, such as a deer quartering to the hunter. In the excitement of the moment, a hunter might shoot slightly off target, but enough off target to matter. Sometimes, a deer hit with a perfect shot can run.

"The difference between a 100-yard tracking job and a 1,000-yard tracking job is a quarter of an inch," Besancon. "There are so many factors. A guy I know made a perfect double-lung shot on a doe with a crossbow. He put his dog on it, and he found that deer 1,000 yards later. I've tracked 'double-lungers' shot with a 270 [rifle]. They leave no blood, and you find that deer 200 yards later. For whatever reason they just don't bleed."

Besancon said some hunters believe that better equipment compensates for marginal angles. Shots that nobody would have dared attempt with an '80s vintage Bear Whitetail II with a 40-pound draw weight are common for people using the latest compound bows from Hoyt or Mathews.

"For some reason, fellows that bow hunt nowadays think their equipment is magical," Besancon said. "If you take a crappy quartering-to shot and stick a deer in the shoulder blade, it is not going to kill that deer. It just won't. Same with rifles. 'Mag' does not stand for magic."

It is a question of ethics and skill, Besancon said.

"Every now and then you just have to accept that the animal will win," Besancon said. "If a deer is quartering to you, he's either going to keep coming to you or he will eventually turn broadside. If he gives that broadside shot, take it.

"If he doesn't, look, you've figured that deer out. You've got him. You haven't spooked him, but if you jab him with something sharp in a non-vital area, he probably ain't going to be coming back. Some people have figured that, 'I've got this deer in range. I've got the right to take whatever shot there is.' That's just unforgivable, but we don't play the game nowadays with the possibility of getting beat."

Every bowhunter wants to hit a deer in the narrow crease where the shoulder meets the body. The effects of adrenaline and excitement make it too easy to shoot too far forward and hit a deer in the shoulder, which will likely produce a non-fatal wound. Besancon recommends aiming slightly farther back. The deer might run a little farther, but that placement increases the chances of a fatal double-lung puncture.

The high back shot produces a nasty looking wound, but it is seldom fatal.

"I have tracked 90 high back shots and recovered two," Besancon said.

Frequently, a wounded deer might enter property that a hunter does not have permission to access. A wounded deer can get off a 100-acre tract very quickly, and network trackers will not cross property boundaries without permission. Besancon is firm on this point, and that also requires educating hunters about trespass laws. Besancon said that even a wildlife officer cannot enter private property to help recover a deer without a landowner's permission.

"Unless you are suspected of criminal activity, they can't come on your property," said Besancon, adding that courtesy and diplomacy resolve most issues. He recommends that hunters establish relationships with neighboring landowners. Visit with them in the offseason and send them Christmas cards.

"I have had anti-hunters allow me onto their property when I explained the situation to them," Besancon said. "They won't allow hunting, but they also don't want a deer to die needlessly on their property, either. I just explain that we're trying to finish something that has already started."

Most hunters are ecstatic when a tracker recovers a dead deer, but not always, especially when a buck turns out to have a smaller rack than the hunter expects.

"I've had people say, 'That's not the deer I shot!' Oh, yes it is!" Besancon said. "But for the most part we get big smiles and big grins and happy kids."