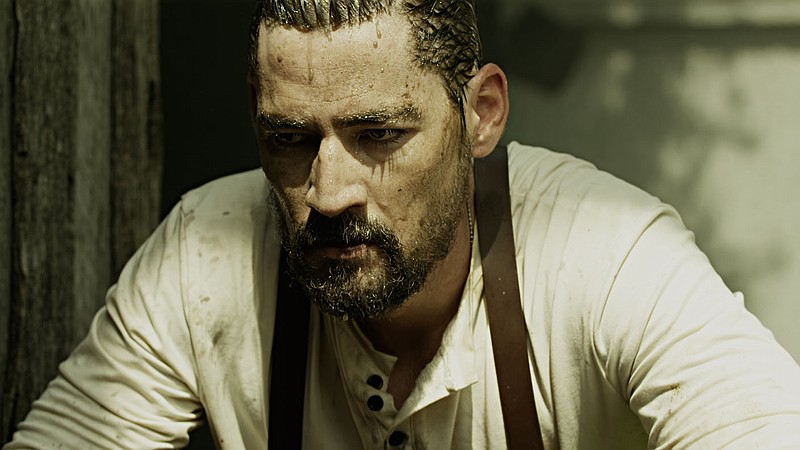 World War II is over, and Charlie Evans, a paratrooper who jumped into Normandy on D-Day, is coming home to Arkansas. It’s a sweet moment full of love and promise as he reconnects with his wife at the train station. But she doesn’t know the burden he brings with him. No one talked about post traumatic stress disorder in 1945.

“During World War II, PTSD was just referred to as ‘battle-fatigue,’” says Caleb Fanning, director of the new Rockhill Studios short film, “Blood on the Risers.” “Most cases were left undiagnosed and untreated. We wanted to help make the viewers aware that PTSD isn’t just a current issue, but it has existed for many generations.”

Producer Blake Elder adds that the crew was also committed to creating a realistic portrayal of the time period.

“With the awesome resources around us, we had the opportunity to replicate an era that the audience could be immersed in,” he says. “Thanks to our great partnerships, including the Shiloh Museum, the Arkansas & Missouri Railroad and the Arkansas Air and Military Museum, we had a jump start to our goal of period accuracy. Coupled with an experienced art and wardrobe department, we’re very proud of the authenticity we achieved.”

“It was a treat to have Rockhill Studios on the museum campus for filming,” says Allyn Lord, director of the Shiloh Museum of Ozark History. “Most of us rarely see the behind-the-scenes activities, so it was a joy to have that insight. And a joy to be able to provide some authenticity for their location shoot.”

The Rockhill production team didn’t necessarily cast Chuck Mere with historical authenticity in mind; he’s not a veteran and, of course, does not remember World War II. But that’s what they got in his portrayal of Charlie. Approached to create special effects for the film, Mere says he found himself connecting to Charlie “in a very profound way” and asked if he could put his name in the metaphorical hat for the role.

“[Blake] said that he had thought of me for the role, but he was concerned about me being too young,” Mere remembers. “This was the same sentiment that almost lost me the role of Max Winslow’s dad in ‘Max Winslow and the House of Secrets.’ I told Blake my actual age, which was 37 at the time, and he was surprised to know that I was actually the perfect age for the character. He asked me to submit a self-tape, and a few auditions later, I got the part.”

In addition to the research he did to portray Charlie, Mere brought his own PTSD to the role.

“In 2011, my first love, Kathy Mellinger, was killed by a drunk driver,” he explains. “When you deal with pain that visceral, something changes in you. It stays a part of you forever. It’s almost as if the person you were dies and a shadow of that person has to take the reins.

“It was important to me to tell Charlie’s story for myself and for my friends,” Mere adds. “I was drawn to the depth of Caleb’s writing, the depth of Charlie as a character, the insane challenge that it would be to bring Charlie to life, and the chance to work with Blake and Rockhill on a much more intimate level.”

Mere not only brought his research and his experiences to the role, he decided to walk — quite literally — in Charlie’s footsteps.

“As soon as I knew I was cast, I had only a month to prepare, and I know that when I’m really stressed, I tend to not eat,” he says. “I figured Charlie was the same way, so I took my diet down to 900 calories per day, and I did at least a hundred pushups per day.

“PTSD is a very real and difficult disorder to understand and deal with,” she says. “Yes, I had a couple of close relationships to pull from. Honestly, dealing with anyone’s mental health on any level, especially with an intimate partner, is confusing at best.

“There were [also] fun elements that intrigued me as an actress,” she adds. “The script was solid. It was a period piece. They were going to film with projections, which is a unique convention. Ultimately it was most appealing because of all the players on the project. Everyone was someone I had either worked with before or had hoped to have a chance to work with. It was an amazing team.”

Rounding out the three-person cast was Scott McLean Harrison, who is originally from Poteau, Okla., but lived in New York City for 16 years and Los Angeles for three years before moving to Rogers in 2019.

“I was attracted to the role because it was more dramatic than I’m used to,” he says. “I usually do comedy, so I was excited to do something different. And once Caleb filled me in a bit more about the character and the storyline, I was even more intrigued.”

Harrison’s character, Jackson Grady, is open to some interpretation. He might not be a ghost, but he is certainly haunting Charlie. He might be Charlie’s conscience, but if so, he demands a brutal price for reparation. And for the actor, the challenge came not just in the creation of the character but in the delivery.

“My grandfather was in the Navy in World War II, so I thought about him quite a bit while filming,” he says. “I don’t have much in common with my character, but I can relate to him when it comes to the truth. In the film, he’s trying to get the truth to be told, and I’ve always found my life to be a whole lot easier if you’re truthful to yourself and to everybody else.

“The role was always intended to be behind a mask,” he adds. “I had never even heard of soldiers wearing these masks until we shot this film, but when doing my research, I found some fascinating photos of them. Even though all you can see is my eyes, I didn’t do anything different in regards to acting, because so much of what you say comes through your eyes already.”

“A camera can pick up the subtle nuances, an eye shift, a finger tap, even a whisper,” agrees Self. “Still very intentional choices, but it’s more intimate [than the stage]. I do love both a great deal, but you definitely have to pull from different toolboxes as an actor.”

Like Afton waiting for Charlie, audiences must be patient about “Blood on the Risers.”

“We are submitting to festivals for this year’s circuit — including Tribeca, SXSW and Sundance — which will be the best way to see it,” says Dan Robinson, one of the film’s producers. “We are submitting to screen at Arkansas festivals this year as well, which will give locals a great opportunity to see it. After the festival run, we will do a local screening event to give the community an opportunity to see what we were able to accomplish.”

‘Blood on the Risers’