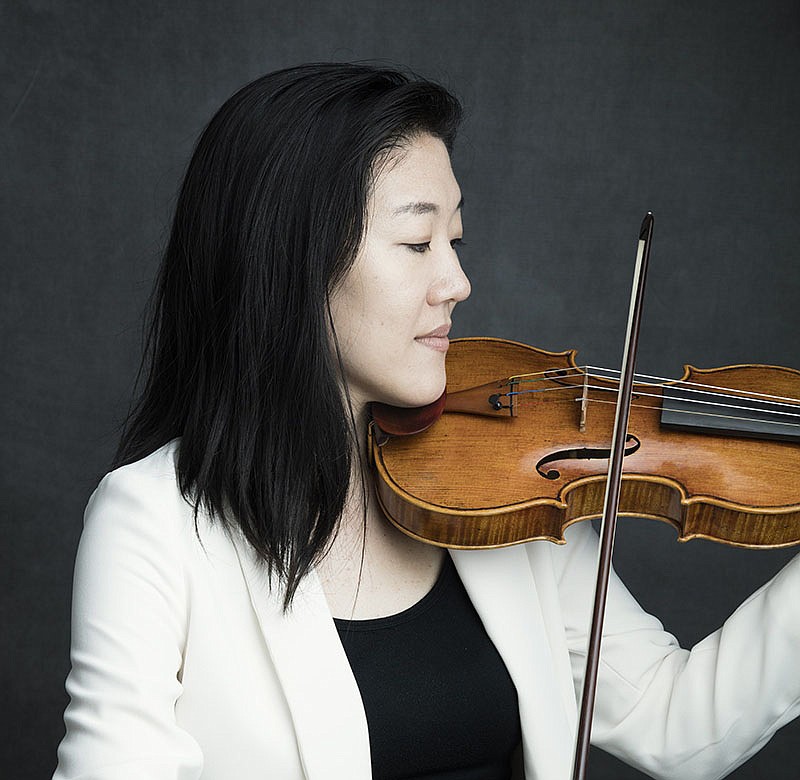 Violinist Er-Gene Kahng says there’s a special thrill about playing as a soloist with the Fort Smith Symphony, of which she is also a member musician. (File Photo)

Music lovers fast enough to grab up the limited seats at the ArcBest Performing Arts Center will enjoy a smorgasbord next weekend presented by the Fort Smith Symphony.

“The Awesome Classix performances on Feb. 27 are part of our scheduled 2020-21 season,” explains music director John Jeter. “The Chaplin film performance on Feb. 28 is a rescheduled event from last season. To avoid some schedule challenges we were dealing with earlier in the year, we decided to combine these two different events on one weekend.”

That means audiences will first hear the Violin Concerto in E minor by Felix Mendelssohn — with violinist Er-Gene Kahng as soloist — and Beethoven’s Symphony No. 4, “two very popular works by well-known composers [and] audience favorites,” Jeter says. “The playful, early Romantic style of the Mendelssohn work provides an excellent contrast to the serious rhythmic drive of Beethoven. These are both exciting works that audiences always enjoy.”

“It has been such a joy to revisit this concerto,” she begins. “There’s always a part of me that worries that I will not have the capacity as an artist to find new things in such a standard and well-known work, [and] I am always relieved and surprised when I keep finding new things. I don’t think I could ever get bored of this piece, or bored of the interpreter’s job of continually finding ways to tinker away at a more and more nuanced interpretation.

“I’m also excited to be performing with an orchestra I know so well,” she adds. “I have known John and the orchestra for 13 years, and while it is typical for artists to zip in and out for a concert, it is a special joy to be able to solo with an orchestra of which you are also a member. There are emotional, musical shorthands that you develop by truly knowing each other; there is no shortcut to that kind of a bond.”

But the Mendelssohn concerto has a special place in Kahng’s heart, no matter where she plays it.

“The third movement — last movement — of this concerto is like my personal Beethoven 5,” she explains. “Just like the symphony came to symbolize victory for so many during World War II, by the time I get to the last page of this concerto, the effervescence and the energy of the music makes me feel — for just a moment — endlessly powerful, perhaps even invincible. Time stops, I forget my troubles, and I feel the singular thrill of … imagining myself bicycling down a steep road without the brakes, or like a rocket shooting up into space! It’s such a child-like image, but it is a simple but powerful emotion that catapults me to the concerto’s conclusion. I hope I’ll be able to convey this thrill to the audience, as it is one of my most favorite musical passages to perform, and one of my most favorite musical places to inhabit.”

Jeter is just excited about the Feb. 28 performance of the score to Charlie Chaplin’s film “The Kid.”

“Performing music live to accompany a film is extremely rewarding,” he says. “It’s very fulfilling to watch and listen as the music helps bring the visual images to life and vice versa. It’s a unique experience in that it combines the best of both worlds of music and visual art.”

And, he adds, this is a unique opportunity as far as timing of the rescheduled performance.

“We were excited to discover that ‘The Kid’ premiered 100 years ago in January 1921,” he says. “It’s so interesting and exciting to experience a film that is 100 years old! It’s kind of hard to fathom that!”

Jeter says he hears every day “how important music is to people these days. This experience is most effective live, so we hope people seek out live music, provided it is being presented is the safest manner possible. Although all of these upcoming performances are officially sold out, we are working hard to open up any turned-in tickets to people who would like to attend.”

COST — The concerts are sold out.