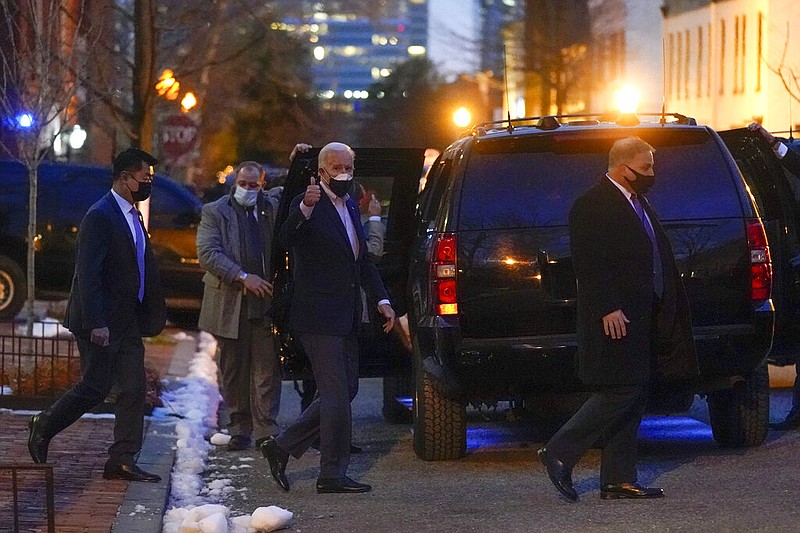 President Joe Biden gestures as he walks to a motorcade vehicle after attending Mass at Holy Trinity Catholic Church in the Georgetown neighborhood of Washington on Saturday, Feb. 20, 2021.

Biden had already approved states of emergency in Louisiana, Oklahoma and Texas after the storms that pummeled the South last week, killing dozens of people and initially rendering millions without power, heat or potable water.

[Video not showing up above? Click here to watch » https://www.youtube.com/watch?v=FTULIcMJD30]

"This is great news for the people of Dallas after a horrible week," Mayor Eric Johnson said Saturday. "The damage caused by this storm is extensive, and the disaster declaration will help our city recover."

Biden told reporters Friday that he is planning a visit to Texas, but he emphasized that he did not want to create a "burden" for officials involved in emergency relief efforts in the state.

"They're working like the devil to take care of their folks," Biden told reporters.

The storms left more than 300,000 people still without power across the country on Saturday, with many of them in Texas, Louisiana and Mississippi.

About 80,000 electric utility customers in Texas remained in the dark and without heat as the state awoke to temperatures in the 20s. More than 14.3 million people in 190 counties were still experiencing water-service disruptions.

More than 50,000 Oregon electricity customers were among those without power, more than a week after an ice storm ravaged the electrical grid. Portland General Electric had hoped to have service back to all but 15,000 customers by Friday night. But the utility discovered additional damage in previously inaccessible areas.

Oregon Gov. Kate Brown ordered the National Guard to go door to door in some areas to check on residents' welfare. At its peak, the worst ice storm in 40 years knocked out power to more than 350,000 customers.

In West Virginia, Appalachian Power was working on a list of about 1,500 places that needed repair, and about 44,000 customers in the state remained without electricity after experiencing back-to-back ice storms Feb. 11 and Monday. More than 3,200 workers were attempting to get power back online, with their efforts spread across the six most affected counties on Saturday.

In West Virginia's Wayne County, workers had to replace the same pole three times because trees kept falling on it.

"We have a responsibility to protect Texans from spikes in their energy bills" resulting from the weather, he said in a statement.

U.S. Rep. Alexandria Ocasio-Cortez, D-N.Y., tweeted Saturday that she helped raise more than $3 million toward relief. She was soliciting help for a Houston food bank, one of 12 Texas organizations that she said would benefit from the donations.

Water woes added misery for people across the South who went without heat or electricity for days.

In many areas, water pressure dropped after lines froze and because other people left faucets dripping to prevent pipes from icing, authorities said.

That's up from 1,300 reporting issues Friday afternoon. But Baker said the number of affected customers had dropped slightly. Most were under boil-water orders, with 156,000 customers lacking water service entirely.

"It seems like last night we may have seen some stabilization in the water systems across the state," Baker said.

Houston, the nation's fourth-largest city, remained under a boil-water advisory Saturday. Much of Austin lacked running water, and officials could not say when it might return.

"This has just been one thing after another," Adler said Friday on CNN. "This is a community of people that are scared and upset and angry. We're eventually going to need some better answers to why we're here."

Saturday morning temperatures in southern Texas plunged again into the 20s, but state temperatures are on the upswing. Highs on Saturday reached the 60s and 70s, with overnight lows above freezing in the 30s and 40s.

But with the warming weather came a new strain on infrastructure. Rapid temperature swings can cause water pipes to burst, ice to slide dangerously off buildings and roadways to crack.

A Saturday thaw after 11 days of freezing temperatures in Oklahoma City left residents with burst water pipes, inoperable wells and furnaces knocked out of operation by brief power blackouts.

Rhodes College in Memphis said Friday that about 700 residential students were being moved to hotels in the suburbs of Germantown and Collierville, Tenn., after school bathrooms stopped functioning because of low water pressure.

As Texas began its recovery from the failure of its electric grid, attention began to shift to whether a disaster of this magnitude could have been avoided and who is to blame for the emergency. Congress is likely to open an investigation this week into what went wrong, and the state's Legislature is expected to conduct its own hearings. Abbott ordered an investigation into the failure.

Complaints are landing on court dockets, too. One lawsuit alleges the Electric Reliability Council of Texas ignored safety warnings for decades. Resident Donald McCarley argues in the suit that the utility failed to prepare for inclement weather and produce enough energy, the Dallas Morning News reported.

At least one other lawsuit related to the power outages has been filed, court records show.

Electric Reliability Council of Texas officials have defended their preparations and the decision to begin forced outages Monday as the grid reached a breaking point.

"Our thoughts are with all Texans who have and are suffering due to this past week," a spokesperson for the Electric Reliability Council of Texas said Saturday in a statement. "However, because approximately 46% of privately-owned generation tripped offline this past Monday morning, we are confident that our grid operators made the right choice to avoid a statewide blackout."

Independent authorities said it is up to the Public Utility Commission of Texas -- which oversees the utility -- to mandate that suppliers better prepare for extreme cold and penalize those that choose not to do so. Without such costs, experts said, the power suppliers will continue to neglect preparations, with predictable consequences.

"To save millions of dollars, the generators failed to weatherize, and the consequences are that people have died and it's cost the state many billions of dollars in repairs to our homes and our buildings," said Tom "Smitty" Smith, a former longtime director of the Texas branch of the left-leaning public-interest organization Public Citizen.

The bout of winter weather could cost $18 billion in insured losses, with the total economic damage likely to be higher, according to Karen Clark, co-founder and chief executive of Karen Clark and Co., a catastrophe modeling firm. The damage was spread across 20 states, though most was in Texas.

The Insurance Council of Texas said the storm would be the "largest insurance claim event in [Texas] history."