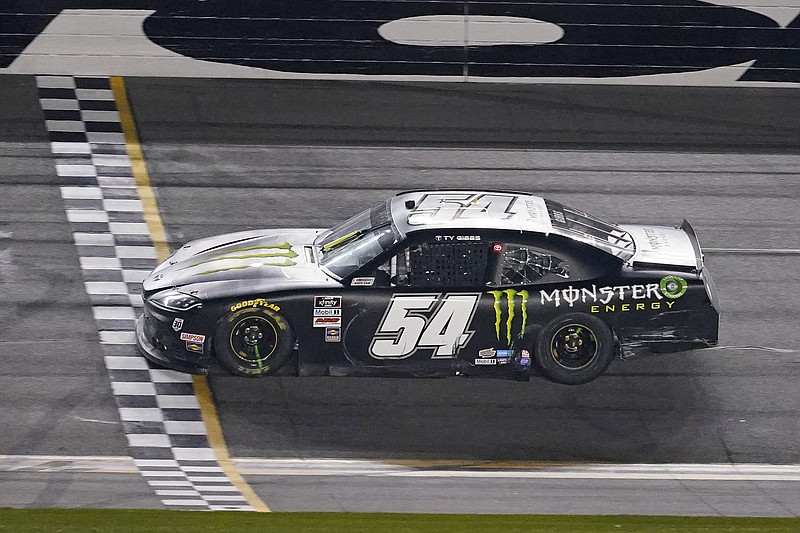 It was the very first NASCAR national series race for Ty Gibbs, who jumped two steps from ARCA to Xfinity for his debut. He plowed through the field on a pair of restarts to beat reigning Xfinity Series champion Austin Cindric in double overtime.

Gibbs became the youngest driver to win an Xfinity road course race at 18 years, 4 months, 16 days. Cindric held the record at 20 on the road course at Mid-Ohio in 2019. Joey Logano holds the overall record; he won 21 days after his 18th birthday in his third race -- also driving for Gibbs.

Chris Gayle of Little Rock is the crew chief for Gibbs' team. It was Gayle's 21st career victory in the Xfinity Series.

Gibbs drove through the grass, used the top lane on the oval and dove inside in the turns in his shocking first win. He'd never raced an Xfinity car before, never done a live pit stop before and covid-19 restrictions cut practice and qualifying for Saturday's race.

Joe Gibbs, a member of the NASCAR and Pro Football Hall of Fames, watched stoically from behind the pit stand. Shielded by a mask, he gave no indication of emotion. But as his grandson crossed the finish line, his glasses fogged and he hugged a Joe Gibbs Racing team member.

"This is the only thing Ty has wanted to do since he was 2-years-old," Joe Gibbs said. "This is such an experience. Any parent or grandparent would tell you, it's like a dream come true for our family."

Ty Gibbs dropped to his knees beside his Toyota and bowed his head into his hands.

Then he admitted he didn't know how to do burnouts, either.

"I don't even know what's going on," he said. Gibbs choked on tears, wiped away his eyes and apologized for giving a poor interview.

"I'm sorry I'm a wreck, I really didn't think this was going to happen at all," he said.

Ty Gibbs won eight ARCA races the last two seasons, and finally old enough to run at the national level, his grandfather gave him a shot at NASCAR's second-tier series. Although JGR is one of the top teams in NASCAR with outstanding equipment, Gibbs stream-rolled through the field and held his own as Cindric tried to muscle him back into his place.

Cindric and AJ Allmendinger crashed racing to the finish of the first stage, and Cindric was left with a gaping hole in his front fender. He dropped to 34th in the field but still drove his way back to the lead.

Cindric, who led a race-high 29 laps, had a Daytona sweep in sight until caution with three laps remaining gave Gibbs a chance. They both pitted for fresh tires and Gibbs restarted 10th, Cindric in 11th.

Gibbs on the first overtime restart blew past a pack of cars on the outside of Daytona's oval and weaved his way in and out of traffic all the way to third. Another caution sent into double OT and Gibbs this time dove inside to gain ground.

He drove deep into the grass -- kicking up dirt all over his car -- and somehow still surged into the lead. Gibbs then pulled away to win of 1.726 seconds over Cindric. 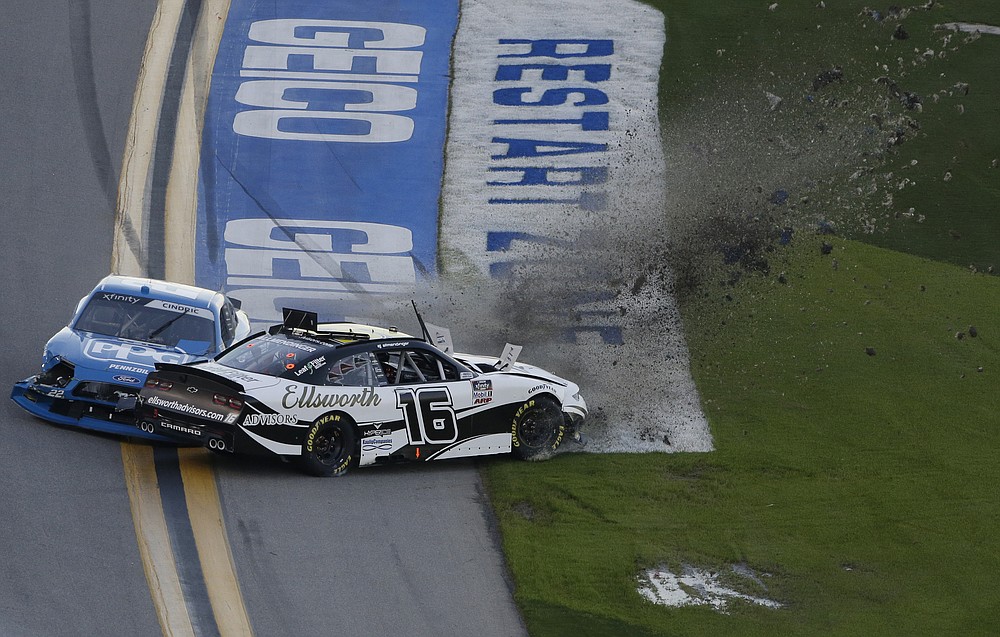 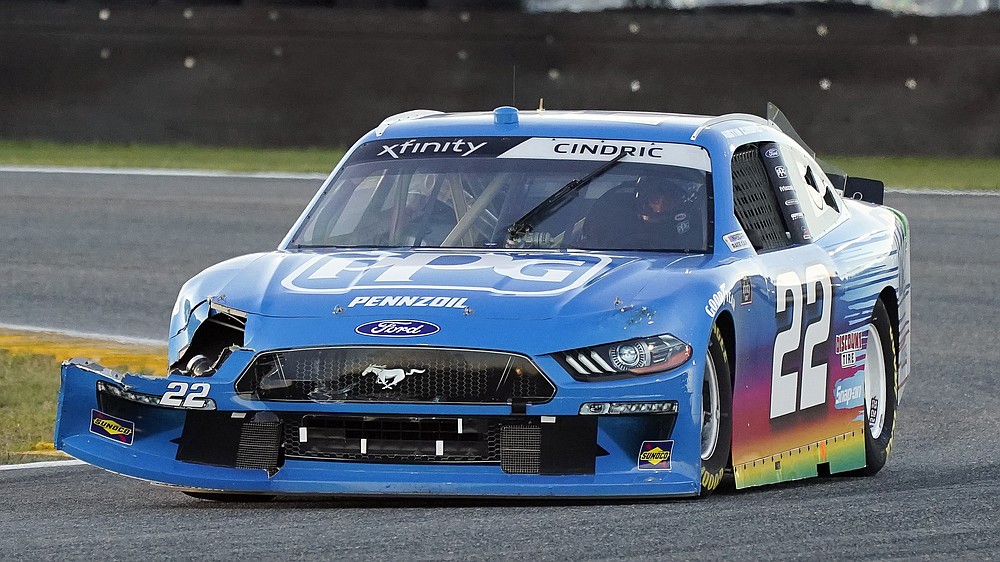 Austin Cindric (22) drives through a turn with damage to his front fender after he was involved in a crash during the NASCAR Xfinity Series road course auto race at Daytona International Speedway, Saturday, Feb. 20, 2021, in Daytona Beach, Fla. (AP Photo/John Raoux) 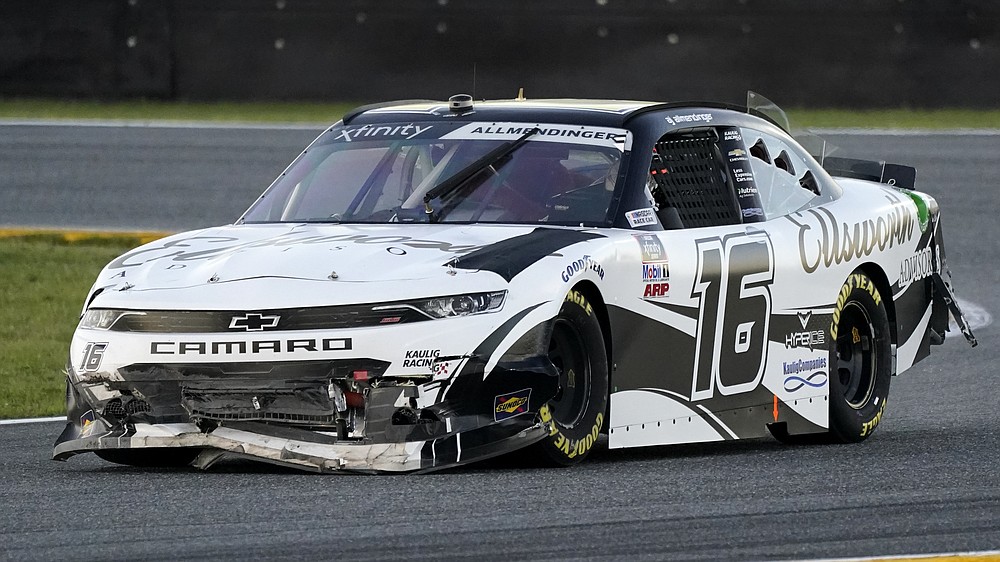 A J Allmendinger (16) heads through the infield after he was involved in a crash during the NASCAR Xfinity Series road course auto race at Daytona International Speedway, Saturday, Feb. 20, 2021, in Daytona Beach, Fla. (AP Photo/John Raoux) 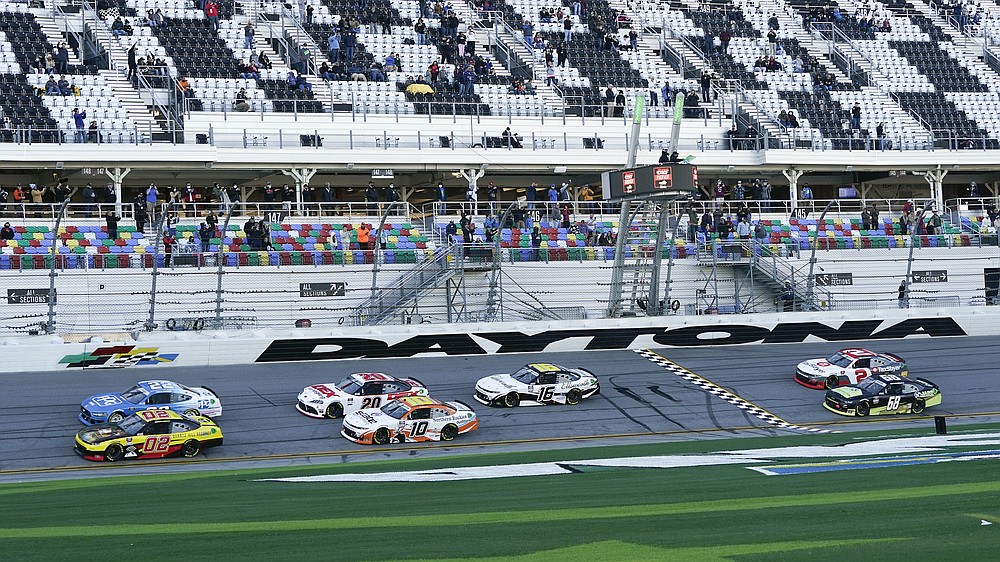