Dust To Dust: 'A Clean House' is hilariously tragic 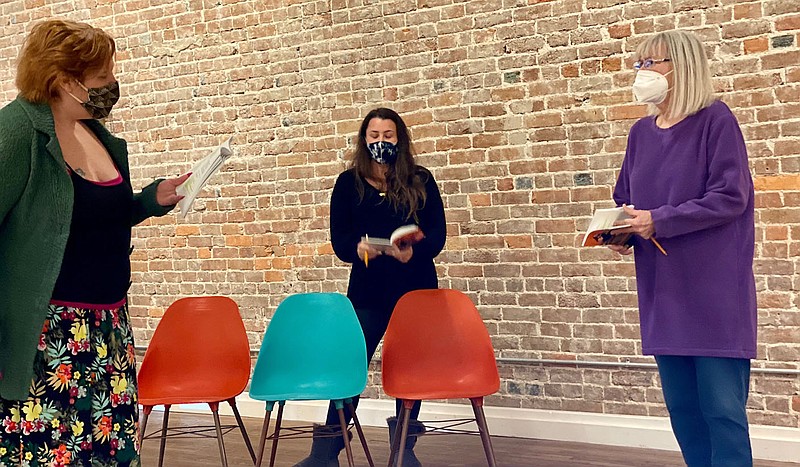 Pictured in rehearsal, Amber Brown (left) plays Lane, a successful doctor who hires Matilde (Daniela Kidd, center) to clean her house. But Matilde doesn’t like to clean, so Lane’s sister Virginia (Jan Riedmueller) takes over the job in the Arkansas Public Theatre production of “The Clean House.” (Courtesy Photo/Joseph Farmer)

Sarah Ruhl's "The Clean House" opens with a joke.

"Of course," wrote The New York Times in a 2006 review, "it's told in Portuguese, so you probably won't get it. But this peculiarity epitomizes a fundamental message of Ms. Ruhl's odd and enchanting play: We may never come to a full understanding of the jokes life plays, but the wisest and possibly noblest response is to have a good laugh anyway."

"The comedy is very intentional," says Joseph Farmer, who is directing the play for Arkansas Public Theatre. "From a maid who is made sad by the act of cleaning to a Gentile man who leaves his wife by following a Jewish law he overheard on a radio program, comedy is ever-present throughout the script."

Now you know the purpose and the premise. The rest is just sitting back and watching the story unfold. The cast has spent many nights creating the comedy via Zoom -- and on other nights, their faces have been half hidden by masks for in-person rehearsals. Farmer calls it a blessing in disguise.

"It helps bring focus to the words of the playwright and highlights the physical humor within the show," he says. "The strength of the women in the cast of 'The Clean House' inspires me. They are fearless. They are funny. They are nothing short of fabulous."

Daniela Kidd, who is new not only to the APT stage but also to acting, plays Matilde, the Portuguese maid who is the fulcrum of the plot. Kidd is, in fact, from Brazil, and she does, in fact, speak Portuguese. She came to Fayetteville, where she is a department manager for Crop, Soil, and Environmental Sciences at the University of Arkansas, with her ex-husband 15 years ago.

Her parents, says Matilde, were the funniest people in their Brazilian village. "My mother and father didn't look into each other's eyes" as a statement of their love, she says. Instead, "they laughed like hyenas." Matilde was the third funniest person in their town, and when her parents died, she says, it was terrible to be expected to be the funniest.

Now she works for Lane, a doctor played by APT veteran Amber Brown.

"She's an excellent doctor, and maybe puts all her energy into that, with not enough left over to spread around to the other areas of her life," Brown says. Lane certainly doesn't want to waste that energy cleaning. Unfortunately, even though she's employed as the maid, cleaning makes Matilde unhappy. Fortunately, it makes Lane's sister Virginia giddy with delight.

"I love dust. The dust makes progress, and I clean the dust, and I make progress. Without dust, I would die," she says. It's a concept actress Jan Riedmueller understands, at least a little. "Virginia is an obsessive-compulsive cleaner, and I have those moments myself," the veteran actress says. "But I'm too lazy to be that clean."

Lane's story comes to a head when her husband (newcomer Shoubhik Purkayastha) leaves her for one of his patients (played by another APT newcomer, Latresa Sweetser).

The New York Times says the key to the play's success "is the fullness with which Ms. Ruhl sees her characters, who all possess complicated interior lives that begin to impinge upon one another in mysterious ways as their fates become intertwined. 'Who are they?' a startled Matilde asks, entering Lane's pristine living room unexpectedly and seeing an unknown couple embracing. 'My husband and the woman he loves,' Lane responds coolly. 'Don't worry. It's only my imagination.'"

Farmer says any theatergoer who enjoyed Ruhl's "Dead Man's Cell Phone," on stage at APT in 2017, knows what to expect from "The Clean House." But in the time of a pandemic, there's also meaning Ruhl might not have anticipated.

"Virginia has a line in the show that says: 'We clean together. We talk, and fold laundry, as women used to do. They would gather at the public fountains and wash their clothes and tell stories. Now we are alone in our separate houses, and it is terrible,'" he recounts. "Though written in 2007, this line alone speaks volumes on the current outlook of many people I know. This line aside, the overall message, I think, is that laughter is food for the soul. 'The Clean House' teaches us about the importance of having a task, having a dream and above all else: the universal power of humor."

WHERE — Arkansas Public Theatre at the Victory in Rogers

FYI — Covid-19 precautions, including limited seating and mask requirements, will be in place.