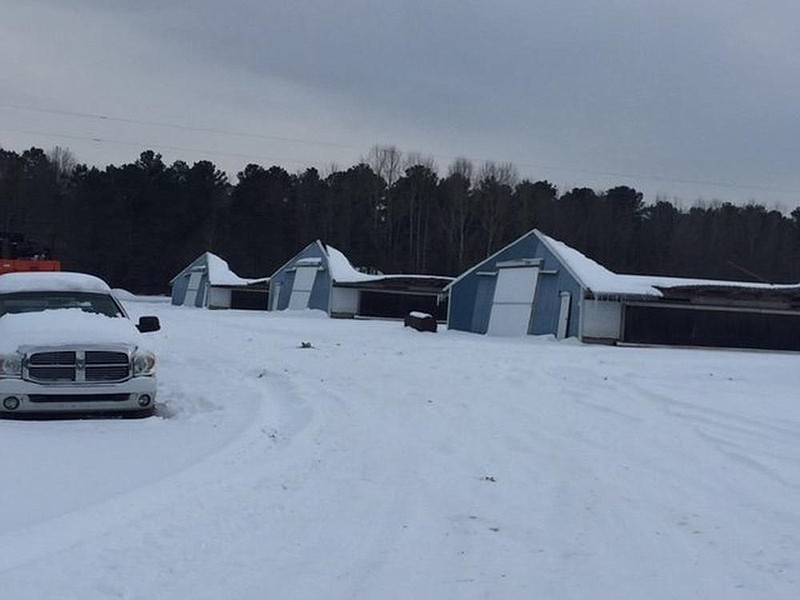 More than 30 poultry houses collapsed under the snow this week in Lincoln County. (Special to The Commercial/Steven Stone)

A week of higher temperatures will give people involved in Arkansas agriculture an opportunity to assess damage and losses from this week's record cold and snowfall.

The heavy snow that came with a second round of winter weather this week proved too much for some poultry houses in southeastern Arkansas.

Lincoln County saw between 12 and 14 inches of snow, Stone said.

"There are over 30 poultry houses with some amount of damage," Stone said Thursday evening. "One farm had five of eight houses collapsed and another that may not make it through the night."

The National Weather Service at North Little Rock said snowfall totals for Feb. 14-18 ranged from 6 inches to more than 22 inches. The heaviest snow fell in a band from Texarkana to just east of Stuttgart. Temperatures dived into single digits and below zero in many parts of the state, with Fayetteville seeing a reading of minus-20 degrees Fahrenheit.

High temperatures for the coming week are expected to rise to nearly 60 degrees in some parts of the state.

"Like all other producers, the struggle to keep water thawed [for livestock] was a huge issue," said Cory Tyler, Fulton County's agriculture extension agent. "Even 'freeze proof' options were still freezing, adding to the producers' already-full workload."

Simpson said it was so cold that "the net wrap on the hay bales froze and has been very difficult to remove."

Tyler said adding to the difficulty of making sure the livestock were fed and had water, was that many producers "were dealing with livestock giving birth -- this included both cattle and goats. Due to the extreme cold and snow, producers who knew livestock were in the final stages of gestation were continually checking their herds multiple times during the day and night."

While cattle and other livestock can adapt to snowy conditions, the sudden change in weather was problematic.

"Since the temperatures dropped so fast, they didn't have time to adapt, and therefore it was much harder on livestock than normal," Tyler said.

"Producers checked livestock constantly, compared to other times of the year, so that if intervention was needed, it could be done quickly," he said. "This normally resulted in a calf in the floorboard of a pickup truck or tractor or in the producer's house in front of the propane stove."

"We personally have lost eight calves" to low temperatures, she said. "Like many ranchers in Polk County, we are just trying to stay ahead by supplying extra feed and breaking ice. We have two hired hands to help, or there is no way we could do that keep an eye on heifers' calves."

Matthew Davis, Jackson County extension staff chairman for the University of Arkansas System Division, said the effects of the deep freeze will be felt across multiple aspects of agriculture.

"The next week or so will be a time of assessment; seeing what needs to be done for everyone," he said.

"Wet and muddy conditions appear to be sticking around for some time," he said. "Even with snow melting, we have rain in the forecast, so any row crop work will be delayed into the first of March looking at the extended forecast."

Heavy snow caused disruptions along interstates in Arkansas and stopped traffic along many rural routes, bringing supply runs to a halt.

"Trucks are several days behind now causing essential items to be in short supply for both humans and animals," Davis said.

"Due to the pileup on I-40, which was at a standstill for about 12 hours, and which runs through our farm, truck drivers were looking for alternate routes. Their trusty GPS took them on Highway 249," she said.

Arkansas 249 runs between I-40 and U.S. 70 via several 90-degree turns and happens to run through her family's farm.

"Two 18-wheelers were stuck overnight on these roads," Tallent said. "My dad, Eric Greenwalt, was making his morning circle (through the farm) and came upon them. So, he and my husband, Chad Tallent, along with a county deputy, pulled them to U.S. 70 with a tractor so they could be on their way.

"If they would have had to wait on a wrecker to pull them out, it would have been late last night because of the need for them on the interstate," she said. "We tend to have to do this during any snow event that stops the interstate, but we are always glad to help out."

To learn about extension and research programs in Arkansas, visit https://uada.edu/. Follow the agency on Twitter at @AgInArk, @uaex_edu or @ArkAgResearch.

Mary Hightower is with the U of A System Division of Agriculture. 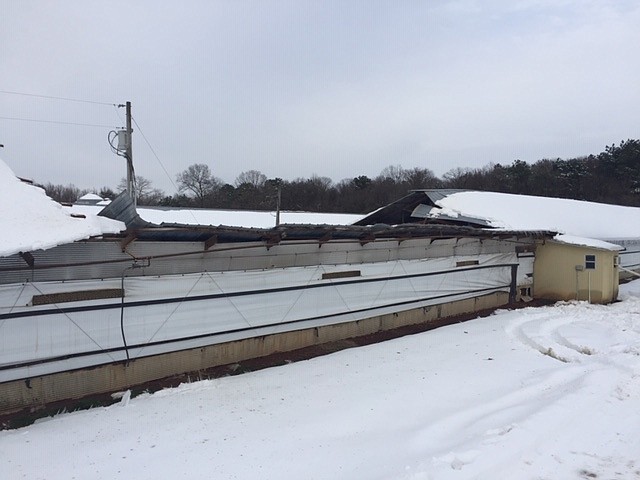 More than 30 poultry houses collapsed this week in Lincoln County. (Special to The Commercial/Steven Stone)
ADVERTISEMENT