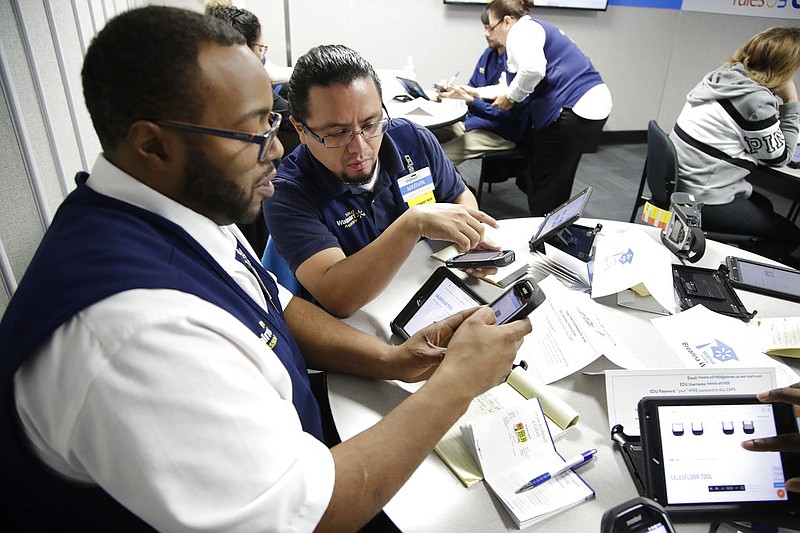 Walmart employees Kenneth White (left) and Marvin Toc work together using an inventory app while participating in a class at the Walmart Academy at the store in North Bergen, N.J., in this Thursday, Nov. 9, 2017, file photo.

Walmart Inc. is raising hourly pay for nearly a third of its U.S. workers. The raises, which vary in amount by location and market, will take effect March 13.

John Furner, chief executive officer of Walmart's U.S. division, said in a memo to employees Thursday that 425,000 store workers in digital and stocking teams will get the raises, with starting rates ranging from $13 to $19 per hour.

The nation's largest private employer, Bentonville-based Walmart has about 1.5 million workers in the U.S.

Furner said in the memo that the raises are "an investment in our people at the same time we make new investments in our supply chain, automation and technology."

"It follows other actions we took last year, including special covid-19 bonuses, raising pay for 165,000 key leadership roles, and restructuring to a team-based model of working in our stores," Furner said.

Store workers "faced challenges that none of us could have predicted, and for customers the items they needed -- however they wanted to shop for them," Furner said. "You helped people feel safe, and many of you played an invaluable role administering covid-19 tests and now vaccines."

The 165,000 workers who got raises in October under the new organizational structure included both salaried and hourly store employees, said Dacona Smith, chief financial officer for Walmart U.S.

Wages for hourly team leaders now start between $18 and $21 and can go up to $30 at supercenters, Smith said when the changes were announced in September. In addition, some workers in the bakery and deli areas saw their minimum hourly pay rise from $11 to $15.

Smith did not say how big a raise the salaried workers would get.

But Smith did say that beginning in the first quarter of this year, all workers who got raises under the restructuring no longer will get the quarterly bonuses based on store performance that other employees receive.

It was unclear Friday whether the 425,000 getting the latest round of raises will continue to receive the quarterly bonuses.

In 2018, Walmart raised its base starting pay to $11 an hour. Rival Target Corp. raised its minimum pay for all hourly workers from $13 to $15 in July.

Amazon.com, Best Buy and Costco are among retailers that have also adopted a $15 minimum wage.

Worker advocacy group United for Respect responded to Thursday's announcement with a statement that by its analysis, about 760,000 hourly Walmart workers will not get a wage increase "and likely will continue to make less than $15 an hour."

The group has long pressed Walmart and other retailers to raise their minimum wage to $15 an hour.