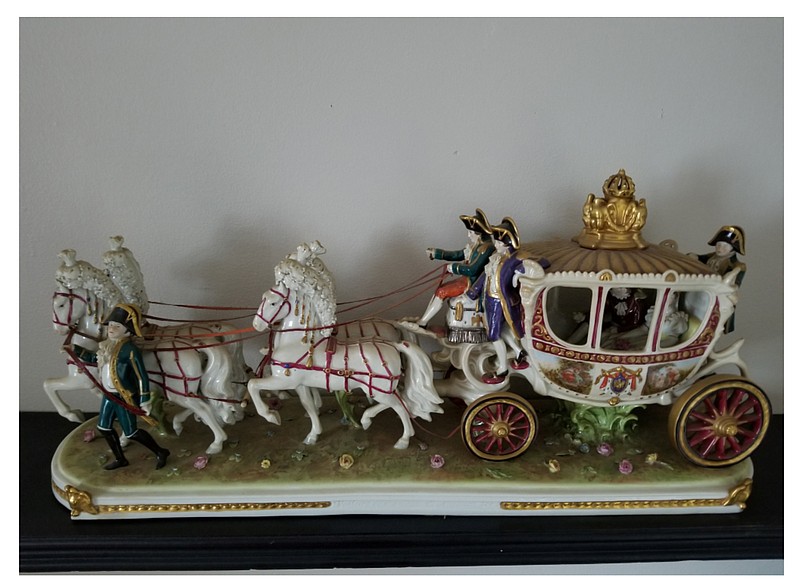 Even without seeing the marks, there is little doubt this piece was made in Dresden, Germany. (Handout/TNS)

DEAR HELAINE AND JOE: I inherited this Dresden piece from my parents and have not been able to find out anything about it. It is in very good condition with the exception of a tiny chip on the crown on top of the coach and the whip is missing from the driver's hand. Anything you can tell me about it, or its value would be appreciated.

DEAR M.L.: Once again, we are called upon to take some guesses — but some lucky research may have provided the answers.

The first clue is the word "Dresden," which we must assume is a name printed on the bottom of this piece. This would indicate that this coach and four horses was decorated, painted and gilded in the city of Dresden, Germany, which is located in the far east of that nation just north of the Czechoslovakian border.

In the 18th century, the manufacture of hard paste, Chinese style, porcelain was first made in the town of Meissen, which was then just 14 miles outside the city and is now part of the modern city of Dresden. But while some of the finest European porcelain was made in Meissen, none was made in Dresden, which was essentially a decorating center.

This leaves the question of who made this piece and when. It is our belief that if this piece is marked it would be either with a crown over an "N" or a capital "S" with a sideways "X" drawn through its midsection. The crowned "N" would be for E. Bohne of Rudolstadt, and the "S" with the sideways "X" was a mark used by A.W. Fr. Kistner (August Wilhelm Fridolin Kistner) of Scheibe-Alsbach, which is in Thuringia, Germany.

Our money is on Kistner because we found one of this company's coaches with four horses that is almost exactly like the one in today's question — if the piece belonging to M.L. is about 25 inches long and has the phrase "Voiture de Marriage de Napoleon 1er" (essentially "Marriage coach of Napoleon first") inscribed on the base.

Napoleon's crest is upon the door and the figures inside the coach should be representations of Napoleon and Josephine. It is thought that coaches such as this one were made circa 1900 or just a tad before, and they were manufactured in some quantity (in other words, they are not particularly uncommon and can be found in various sizes and configurations).

We now need to address the damage reported by M.L.. The first item is the missing whip in the driver's hand and our research reveals that this fragile appendage almost never survived, and we could not find an example where the whip was still in place. What we did find was that sometimes this "whip hand" sometimes held reins.

As for the chip, it can be easily repaired and does not greatly affect the overall value. Most of the Dresden coaches we found had much more damage than those present on the example in today's question. At auction, this piece should fetch $500 to $750 and retail in the $1,000 to $1,500 range.